Samajwadi Party Workers Protesting Over UP Rape Lathicharged In Lucknow 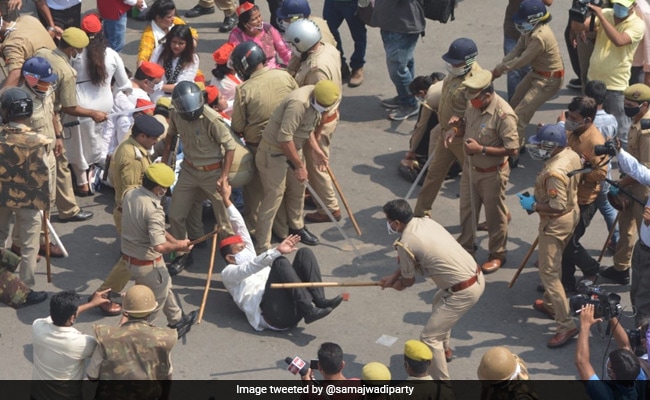 Samajwadi Party workers were lathicharged by the police in Hazratganj area.

Samajwadi Party workers were on Friday lathicharged by the police in Hazratganj area in Lucknow while they were taking out a protest march against the Hathras gang rape and farm laws.

The march which started from the party office was supposed to end at the Gandhi statue in the city where the MLAs and senior party leaders were scheduled to begin a "maun vrat" (vow of silence).

However, the protesters were stopped at Hazratganj crossing, where police had put up barricades.

As the SP workers insisted on being allowed to move ahead, a heated argument ensued between the two sides following which police personnel resorted to lathi charge to disperse the crowd.

"Today, by arresting party MLAs and senior leaders, going to sit on ''Maun Vrat" and dharna for "Hathras ki beti", government suppressed the voice of truth in a violent way on the birth anniversaries of Gandhi and Lal Bahadur Shastri. This is condemnable," the party's national president Akhliesh Yadav said.

We demand an FIR against the District Magistrate and Superintendent of Police of Hathras, he said.

"Stopping of peaceful foot march of SP MLAs and leaders on the directives of the chief minister is murder of democracy," the party said.

However, the state police said that the action was taken to maintain the state's law and order.

"We have detained SP workers including some MLAs. They have been taken away from the spot (Hazratganj)," a senior police officer said.