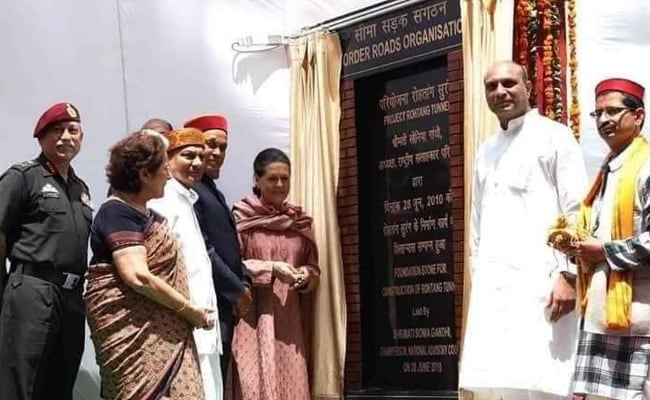 The Congress says Sonia Gandhi laid the foundation stone at the south portal on June 28, 2010.

The police made the clarification two days after the Himachal Congress alleged that the foundation stone laid by Sonia Gandhi for the tunnel a decade ago had been removed before its inauguration by Prime Minister Narendra Modi on October 3.

Kullu superintendent of police Gaurav Singh said the Border Road Organisation had kept the stone in the mechanical workshop of the tunnel's construction company SAJV so that it could not get damaged during the construction.

The SP said Lahaul-Spiti police had got a complaint from district Congress regarding the missing stone and it was forwarded to the Kullu police.

This came to light during investigation that the foundation stone is secure and lying in the workshop, he added.

Earlier in a letter to Chief Minister Jai Ram Thakur, state Congress president Kuldeep Singh Rathore on Monday said Gandhi had laid the foundation stone on June 28, 2010 in the presence of the then CM Prem Kumar Dhumal and Union minister Virbhadra Singh.

Former prime minister Atal Bihari Vajpayee, after whom the tunnel has been named, had announced the project during a public meeting at Lahaul-Spiti's Keylong in June 2000.

He had laid the foundation stone for an approach road to the tunnel in 2002.

The Congress leader said if the stone is not reinstalled within a fortnight, the party will launch a state-wide agitation.

"This is an undemocratic, unconventional and illegal step ever noticed in the history of Indian democracy that the legally laid foundation stone of any project approved by the then government is removed after its completion to fulfil political goals of a particular ideology," the Himachal Congress chief had said in a two-page letter.

Manali block Congress president Hari Chand Sharma had submitted the complaint in this regard to the Kullu police.

He had complained that the foundation stone laid by Gandhi at the south portal of the tunnel in Manali''s Dhoondi was missing.

Similarly, Lahaul-Spiti Congress chief Gialchhen Thakur submitted a complaint to Lahaul-Spiti police in this regard.

Keylong Deputy Superintendent of Police (Dy SP) Hemant Thakur had told PTI that the complaint was forwarded to the Kullu police as the stone by Sonia Gandhi was laid in Dhoondi or Solang Nullah in Manali.

Built at an altitude of 10,040 feet, Rohtang's Atal Tunnel reduces the travel between Manali and Leh by 46 km, saving four to five hours.

Free and fair polls not possible in West Bengal without Prez rule: Vijayvargiya