Donald Trump has been warned he could face legal action if his campaign continues to use songs by the Rolling Stones.

The band's lawyers are working with performing rights organisation BMI to stop the US president from using any of their songs at campaign events.

The BMI has told the Trump campaign that any future use will breach license agreements.

The Rolling Stones have sent cease and desist directives to President Trump as far back as his 2016 campaign but his use of You Can't Always Get What You Want at the recent rally in Tulsa, Oklahoma, pushed them - through the BMI - to threaten legal consequences if he persists. 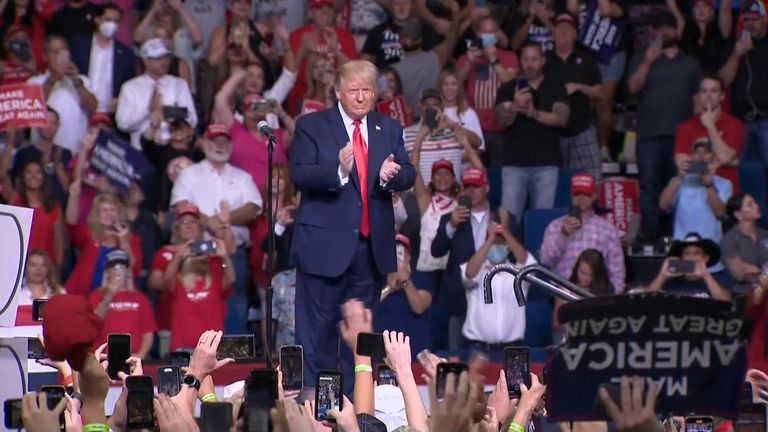 Image: You Can't Always Get What You Want was played at a recent Trump rally in Tulsa, Oklahoma

The BMI told entertainment website Deadline: "The Trump campaign has a Political Entities License which authorises the public performance of more than 15 million musical works in BMI's repertoire wherever campaign events occur.

"There is a provision, however, that allows BMI to exclude musical works from the license if a songwriter or publisher objects to its use by a campaign.

"BMI has received such an objection and sent a letter notifying the Trump campaign that the Rolling Stones' works have been removed from the campaign license, and advising the campaign that any future use of these musical compositions will be in breach of its license agreement with BMI."

The Rolling Stones are not the first band to take issue with President Trump's use of their music.

Prince, Rihanna, The Rolling Stones, Pharrell Williams, Aerosmith and Neil Young are among a long list of stars who have previously criticised the president for using their tracks.

Just days ago, the estate of Tom Petty issued the campaign with a cease and desist notice over his use of his song I Won't Back Down.

The family had said the song was written for "the common man" and they didn't want it used for a "campaign of hate".

Rock band Queen complained after Mr Trump walked on the stage to We Are The Champions during the Republican National Convention in Ohio as he campaigned for the 2016 election.

Adele's spokesman also complained after her songs Rolling In The Deep and Skyfall were used at Trump rallies in 2016 without her permission.