Death Valley, Calif., the record-holder for the highest air temperature ever recorded on Earth, 134 degrees Fahrenheit, could come fairly close to that mark later this week as an extraordinary heat wave tightens its grip on the West.

And that isn't the only location that will stamp new marks in the weather history books with this heat surge, according to AccuWeather meteorologists.

Forecasters say this current heat wave won't just be remembered for its intensity, but also for its duration.

Dozens of record highs have fallen from California and Arizona to Montana and Idaho, and more are likely to tumble heading into the weekend as temperatures remain well above 100 F and even 110.

The expansive nature of excessive heat watches and warnings over parts of the country familiar with extreme heat is a testament to the severity of this particular heat wave. Many of these alerts last into the weekend. 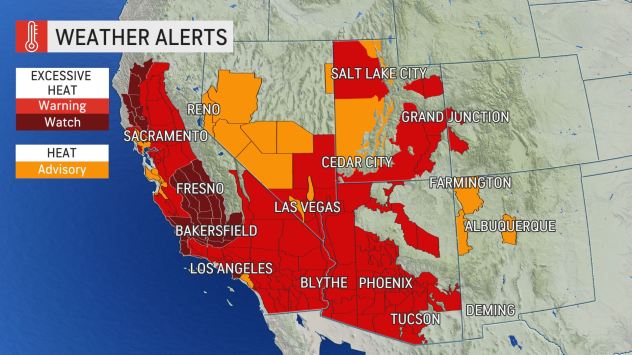 The interior West will remain sweltering through the remainder of the week and into the weekend, according to AccuWeather lead long-range meteorologist Paul Pastelok.

"Temperature departures from the Southwest to Montana can average 10-20 degrees Fahrenheit above normal. Some areas will even have temperatures up to 25 degrees above normal," Pastelok said.

Temperatures began to soar this past weekend in response to a northward bulge in the jet stream.

In Montana, the record high temperatures will be past their peak beyond Tuesday as a sweep of slightly cooler air arrives at midweek.

For areas farther south, however, the most intense heat is yet to come. This includes the lowest point in North America -- Death Valley.

From Wednesday through Saturday, the temperature could come within 10 degrees of the all-time high ever recorded on Earth -- a scorching 134 degrees set in Death Valley on July 10, 1913. The AccuWeather forecast calls for record-breaking high temperatures in the middle 120s each of these days. The average high for the middle of June in Death Valley is around 110.

Temperatures are forecast to peak at 126 Wednesday and 125 Thursday and Friday. 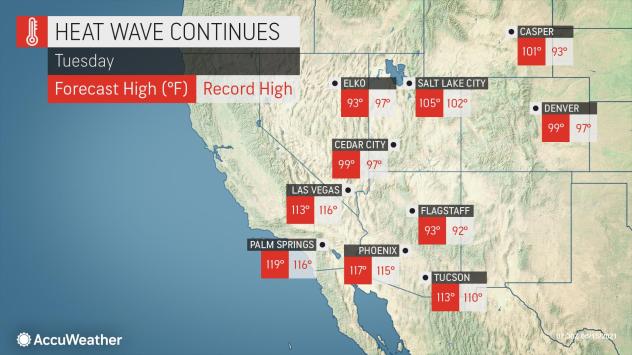 Phoenix is expected to reach or exceed 115 degrees each day through Saturday, which would break its record for consecutive 115-degree days of four. This record was achieved in 1968, 1979, 1990, 1995 and twice in 2020, according to the National Weather Service.

Las Vegas is another traditionally hot city that will experience the heat to another level through the middle of June. Through Saturday, Sin City is forecast to approach 115 degrees and challenge record-high temperatures that date back to 1940.

"It is unusual for Las Vegas to reach above 115 degrees, even in the hottest part of summer. The official reporting station for the city has documented temperatures above 115 degrees in only 21 of the last 73 years," AccuWeather meteorologist Mary Gilbert noted. 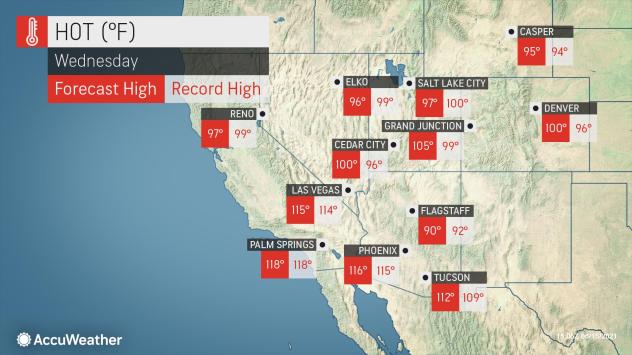 Salt Lake City has recorded two consecutive days of record-breaking temperatures this week with a high of 102 on Sunday and 103 on Monday. 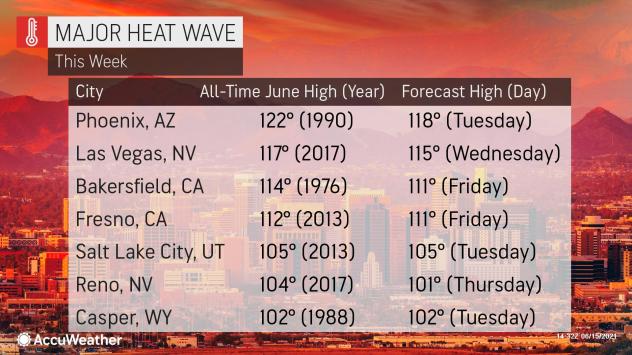 Salt Lake City is among a list of cities expected to challenge their all-time June high.

In Central and Northern California, Wednesday will be the first day of triple-digit heat for this event, then the peak of the heat will be from Thursday through Saturday, according to AccuWeather senior meteorologist Heather Zehr. 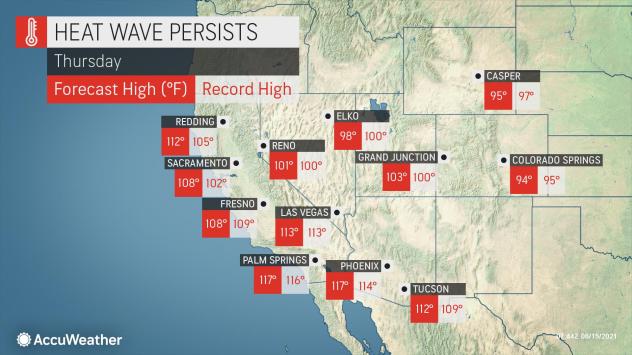 Fresno and Sacramento, Calif., are among the locales that will endure record-breaking heat during this stretch.

The NWS office in Hanford, Calif., said on Twitter that "heat like this happens rarely" and to anticipate "little cooling overnight."

Experts urge visitors and even longstanding residents who may be more accustomed to such extreme conditions to limit outdoor activity to the coolest times of the day, drink plenty of fluids and spend as much time as possible in air-conditioned buildings. Make sure you also know the warning signs of heat-related illnesses. 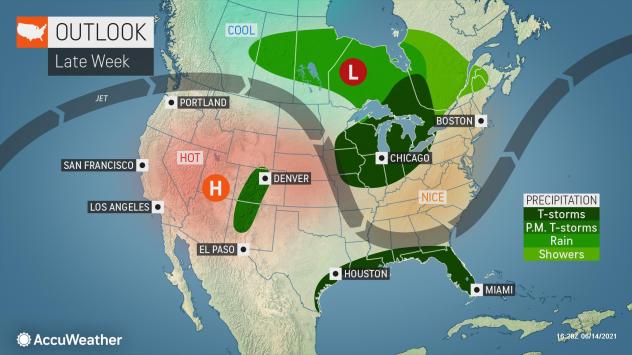 Rainfall opportunities will be limited in the hot pattern, though there may be an uptick in storms in the Four Corners region as the week progresses.

"There is the chance, especially late in the week, for pop-up afternoon thunderstorms across the higher elevations of Utah, Colorado, New Mexico and Arizona," Pastelok said.

While these storms will bring some needed rainfall to drought-stricken areas, lightning from these storms may also start new fires.