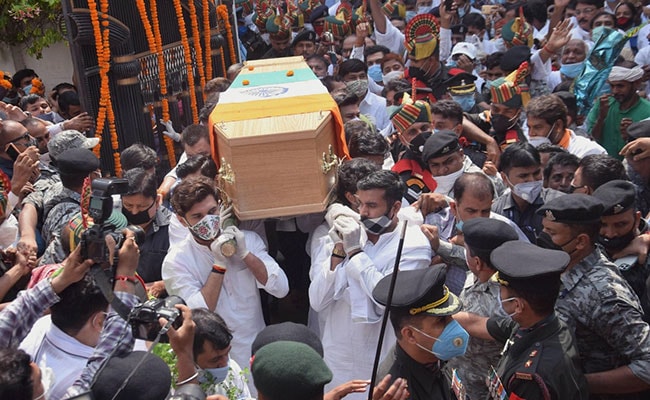 Ram Vilas Paswan died at a Delhi hospital on Thursday; he was 74 years old

Union Minister Ram Vilas Paswan was given a state funeral and cremated at Patna's Janardhan Ghat this afternoon, with his son and LJP chief Chirag Paswan performing the last rites. Mr Paswan, 74, died Thursday night at a Delhi hospital where he had earlier undergone heart surgery.

Each of the three placed wreaths on the coffin bearing Mr Paswan's body earlier today, after it was flown into Patna and hundreds crowded along the streets as he made his final journey home.

"Ram Vilasji was not just a leader from Bihar... he was a national leader, a people's leader. He was from an ordinary family but became a Lok Sabha MP nine times and Rajya Sabha MP twice. We are extremely pained by his death," Union Minister Ravi Shankar Prasad said today.

"I met his family. He left too soon," he added, describing him as "the voice of the neglected".

President Ram Nath Kovind, Prime Minister Narendra Modi and Congress MP Rahul Gandhi were among the many people who paid rich tributes to Mr Paswan, who was widely praised as someone who managed to maintain friendly relations with opposition leaders.

"I am saddened beyond words. There is a void in our nation that will perhaps never be filled. Shri Ram Vilas Paswanji's demise is a personal loss. I have lost a friend, valued colleague and someone who was extremely passionate to ensure every poor person leads a life of dignity," PM Modi said.

I am saddened beyond words. There is a void in our nation that will perhaps never be filled. Shri Ram Vilas Paswan Ji's demise is a personal loss. I have lost a friend, valued colleague and someone who was extremely passionate to ensure every poor person leads a life of dignity. pic.twitter.com/2UUuPBjBrj

Ram Vilas Paswan's death was announced by his son, Chirag Paswan, who must now overcome the loss of his father lead the LJP in Bihar Assembly elections that start in less than 20 days.

Chirag Paswan posted a throwback photograph of him as a young boy in his father arms with this message: "Papa... Now you are not in this world but I know you are always with me wherever you are. Miss you Papa".

A powerful Dalit leader from Bihar, Mr Paswan was among those leaders - along with Lalu Yadav and Nitish Kumar - who were inspired and nurtured by the JP movement in the 1970s.

Known as one of the great survivors in Indian politics, Mr Paswan was a minister in almost every central government formed since 1989 and served six Prime Ministers, starting with VP Singh. In PM Modi's cabinet, he was in charge of the Consumer Affairs, Food and Public Distribution portfolios.