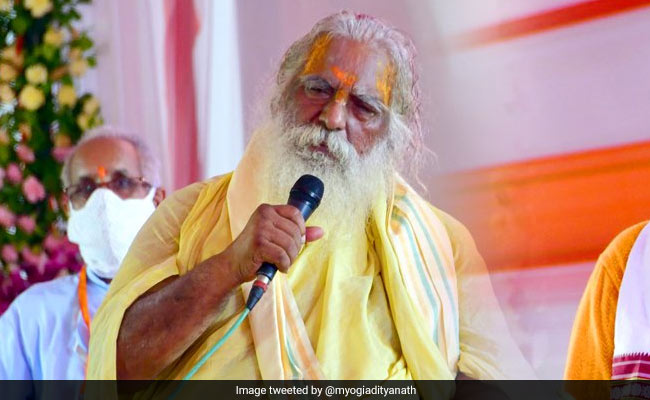 The head of the Ram Janmabhoomi trust in Ayodhya, who shared stage with Prime Minister Narendra Modi and several other VIPs during the groundbreaking ceremony for a Ram Temple last week, has tested positive for coronavirus.

Mahant Nritya Gopal Das was among the five people on the stage at the grand ceremony at Ayodhya in Uttar Pradesh on August 5.

The others on the stage were Uttar Pradesh Chief Minister Yogi Adityanath, Governor Anandiben Patel and Mohan Bhagwat, chief of the Rashtriya Swayamsevak Sangh (RSS), the BJP's ideological mentor.

Days before the ceremony, a priest, Pradeep Das, and 14 policemen on duty in the Ram Janambhoomi complex had also tested positive for coronavirus.

PM Modi laid the first brick for a Ram Temple at Ayodhya at the mega ceremony last Wednesday. He returned to the holy city after 29 years to participate in the "Bhoomi Pujan" or the groundbreaking ceremony for the temple, which meets a core promise of the ruling BJP.

The BJP has for years pushed for a Ram temple at the site where the 16th century Babri mosque once stood before it was razed in 1992 by activists who believed it was built on the ruins of a temple marking the birthplace of Lord Ram. The 2.77 acre site was claimed by both Hindus and Muslim until the Supreme Court last year handed it over for a Ram temple.

'No follow-up results' after meeting with PM: Farooq Abdullah