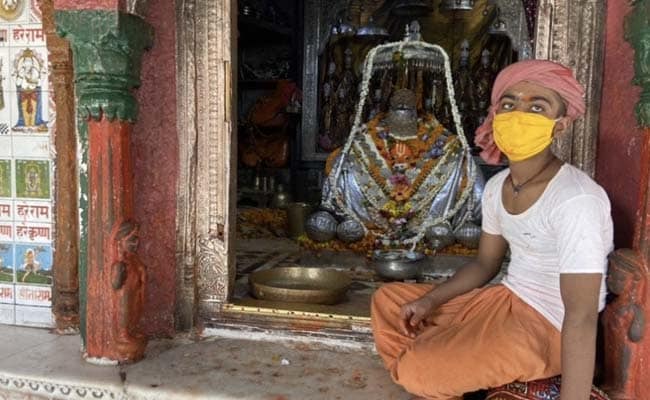 Chief Minister Yogi Adityanath offered prayers this morning at the Gorakhnath temple in eastern Uttar Pradesh's Gorakhpur town where he is the head priest, perhaps sending a signal as places of worship opened up across the state despite a rise in the number of COVID-19 cases.

But the focus was on temple town Ayodhya where the construction of the Ram Temple has been delayed for over two months because of the lockdown to control the pandemic. Starting construction is crucial for the BJP as it looks ahead to assembly elections in UP two years from now.

There was no social distancing on display this morning, as the trust formed to oversee temple construction opened a camp office right next to the Ram Janmabhoomi site after a number of religious rituals.

Anuj Jha, Ayodhya's top government official and a member of Ram Janmabhoomi trust from the government's side, told NDTV that no date has been set yet for the laying the foundation stone for the temple, which was earlier slated to happen on April with Prime Minister Narendra Modi in attendance. Mr Jha did not attend the morning function at the camp office of the trust.

"During the lockdown, following all guidelines, certain things were done for the preparatory stage like levelling of land. But beyond that I think we are still to hear on the dates. I hope to hear about the dates but I must clarify the guidelines talk about setting a date for restart of social or religious functions so the moment we have those dates then things can move ahead," Mr Jha said.

At Ayodhya's other famous temples like the Hanuman Gadhi temple, there was just a trickle of visitors on day one of reopening. The temple usually sees thousands of footfalls on a normal day.

"We want people to stay indoors, most importantly the elderly and kids . We have opened up to cater to the locals who used to visit the temple as part of their daily routine. We are not expecting visitors from outside," said Mahant Raju Das, chief priest at the temple.

In November 2019, the Supreme Court ruled that the then disputed land in Ayodhya would be given to a government-run trust for the building of a temple for Lord Ram and Muslims will be given a five-acre "suitable" plot elsewhere in the district.

The landmark verdict in the case -- which had a religious and political flashpoint over the country for decades -- was passed by the five-judge constitution bench unanimously amid appeals for peace by political and religious leaders and heightened security across the country.