The “QAnon Shaman” who wore fur and a horned helmet during the January 6 United States Capitol insurrection said his actions “were not an attack” on the US in his first interview after he was released on Thursday and as authorities raise alarms about a possible attack on March 4.

Jacob Chansley, a noted adherent of the far-right QAnon conspiracy movement that believes former President Donald Trump was chosen to defeat a cabal of global liberal elites who harvest children’s blood to stay young, stormed the US Capitol along with thousands of other Trump supporters.

Chansley told US broadcaster CBS, “My actions were not an attack on this country. That is incorrect. That is inaccurate, entirely”. He claimed he “sang a song” while allegedly on the Senate floor, to create “positive vibrations in a sacred chamber”.

This is “part of being a shaman”, Chansley said, going on to say he also stopped people from stealing muffins from a Senate break room.

So far, about 300 people have been charged with federal crimes for their roles in the riot. Five people, including a Capitol Police officer, died. 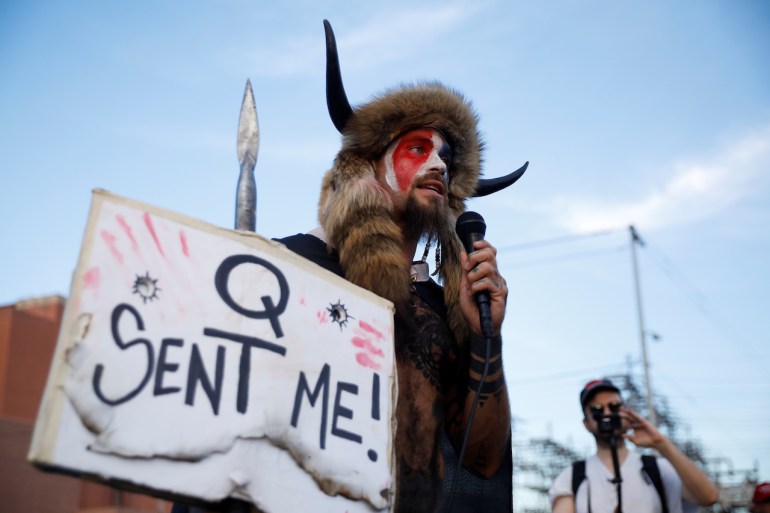 Jacob Chansley, holding a sign referencing QAnon, speaks as supporters of US President Donald Trump gather to protest the results of the 2020 presidential election, in front of the Maricopa County Tabulation and Election Center in Phoenix, Arizona on November 5, 2020 [File: Cheney Orr/Reuters]The “one very serious regret that I have, was believing that when we were waved in by police officers, that it was acceptable”, Chansley said of breaching the Senate.

The comments highlight concerns over the lax response from Capitol and federal law enforcement to the January 6 attempt by far-right Trump supporters to stop a joint session of Congress from certifying President Joe Biden’s electoral victory.

Capitol Police and FBI authorities have recently faced Congressional questioning about intelligence gathering ahead of the January 6 riot – and about why the far-right extremists were able to easily breach the Capitol.

Authorities now warn of plans to seize the US government on Thursday, March 4.

Online chatter identified by authorities included discussions among members of the Three Percenters, an anti-government militia group, concerning possible plots against the Capitol on Thursday, according to two law enforcement officials who were not authorised to speak publicly and who spoke to the Associated Press on condition of anonymity.

Members of the Three Percenters were among those who stormed the Capitol on January 6.

The plot is related to the QAnon conspiracy movement, purported adherents of which have claimed Trump will rise again to power on March 4 and that thousands will come to Washington, DC, to try to remove Democrats from office.

March 4 was the original presidential inauguration day until 1933, when it was moved to January 20.

The US House wrapped up its work for the week on Wednesday night, but the US Senate still had a busy day scheduled for Thursday with votes going well into the evening.

Lawmakers, congressional staffers and law enforcement officials are still on edge after the attack on January 6, even as the security around the Capitol remains at an unprecedented level. 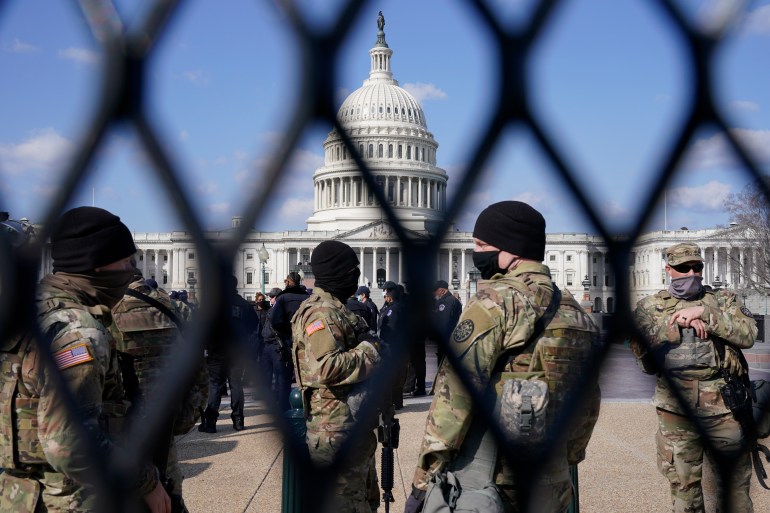 National Guard troops keep watch on the US Capitol on March 4, 2021 as police say they have uncovered intelligence of a ‘possible plot’ by a militia group [Jacquelyn Martin/AP Photo]Capitol Police announced they would increase their security posture on Wednesday. About 5,200 National Guard members remain in DC, the remainder of the roughly 26,000 that were brought in for President Biden’s January 20 inauguration, which went off with no problems.

The National Guard was asked to remain in DC for two additional months by Capitol Police on Thursday, according to news reports.

Acting Capitol Police Chief Yogananda Pittman said during House testimony Wednesday that her investigators had collected “some concerning intelligence”, but declined to provide any details publicly, saying that it was “law enforcement sensitive” and that she would provide a private briefing for the subcommittee members.

But online chatrooms where QAnon and militias organised the January 6 riot are noticeably silent. Some QAnon adherents are warning March 4 is a “false flag” trap.

Authorities have not noticed any increase in hotel occupancy or flights to the US capital.