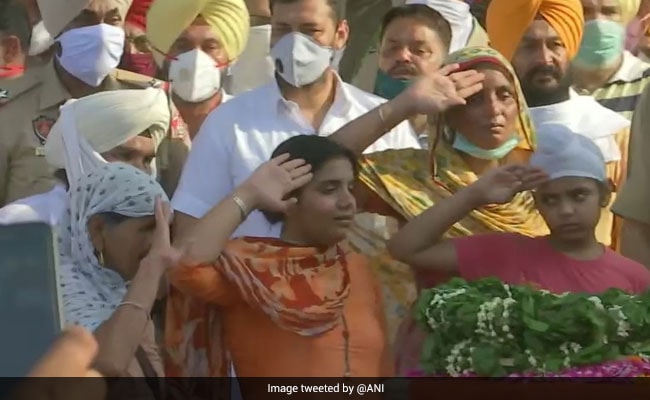 Two Punjab soldiers who died fighting the Chinese in Galwan Valley were cremated Thursday at their home villages, their young children - in one case a 10-year-old - lighting the funeral pyres.

Four of the 20 soldiers who died in the clash in Ladakh's Galwan Valley on Monday were from Punjab. The bodies of sepoys Gurbinder Singh (Sangrur) and Gurtej Singh (Mansa) are expected to reach their villages on Friday, officials said.

People shouted slogans like 'Shaheed Amar Rahe' and ''Bharat Mata Ki Jai'' when the body of the 39-year-old soldier, wrapped in the tricolour, reached Seel.

Mandeep Singh, who joined the Army in 1997, had reported back to his unit only about two weeks ago after a month's leave.

A large number of mourners assembled at the family''s home, where emotions ran high.

Before the arrival of body, Jasbir Kaur and Jaswinder Kaur said they were proud of Satnam Singh''s sacrifice for the nation.

His mother said Satnam Singh (41) had always wanted to don the uniform and hold a rifle.

Answering a question, she sought the severest punishment for China. "It''s not just one mother crying, there are many others," she said.

Punjab cabinet minister Sukhjinder Singh Randhawa, other politicians and officers from the armed forces, police and district administration paid tributes to the soldier, who had joined the Army in 1995.