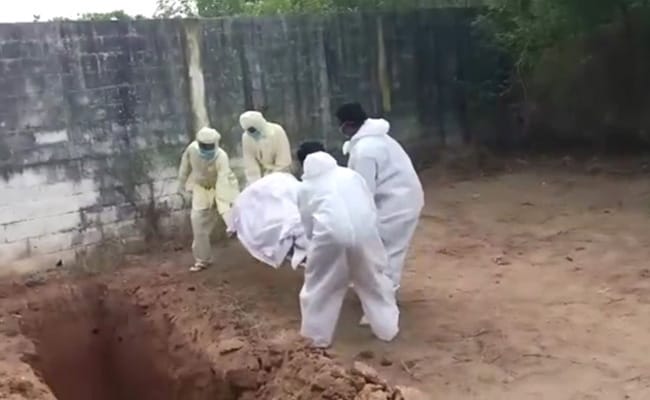 The undignified handling of the COVID patient has led to massive outrage in Puducherry.

A video of government workers in Puducherry hurriedly throwing the body of a COVID-19 positive man into a pit has caused massive outrage, prompting the administration to order a probe into the incident.

The video shows four men in PPEs moving the lifeless body from an ambulance and literally dumping it into the grave. Less then 30 seconds later one of the me is heard telling a government official that they have "thrown the body" for which the official shows thumbs up in approval.

It also appears that the front line workers ignored a series of COVID protocol while handling the body. The video shows the dead person was merely wrapped with a white cloth and not in a bag as manadated in such cases. The cloth wrapped around the body also opened up as it was dropped exposing the workers to tremendous risk of infection. It is not clear yet if the body was duly embalmed.

Sources in Puducherry told NDTV that the body was of a Chennai resident who had tested positive during his visit.

The undignified handling of the COVID patient has led to massive outrage in Puducherry.

"Dignified disposal of dead body is a matter of right. Such an insult to a dead person is an offence under section 500 of Indian Penal Code. The health workers along with those supervisory staff are punishable with penalty for defamation of deceased person," India Against Corruption said in statement.

Sources in the health department say, the body was handed over to Revenue officials for burial.

Puducherry Collector Arun has ordered a probe. "I've issued a memo to the concerned department. It's very unfortunate. I am enquiring into the issue. Have properly briefed them," he told NDTV.

Lieutenant Governor Kiran Bedi said show cause notices are being served to the individuals involved.

Not long ago in neigbouring Chennai, the body of a doctor who died after contracting coronavirus was not allowed to be buried. Mob attacked the health workers in the ambulance carrying the body of Dr Simon Hercules forcing his friend to drive the ambulance and bury the doctor himself. The incident later forced the Tamil Nadu government to bring an ordinance which allowed jail term of upto three years for anyone blocking or attempting to block funerals of coronavirus victims.