The owner of some of the West End's most historic theatres is staging a £50m cash injection into the business amid uncertainty about the recovery prospects for Britain's entertainment industry after the COVID-19 pandemic.

Sky News has learnt that Providence Equity Partners has agreed to inject the sum in new equity into Ambassador Theatre Group (ATG) to help it survive the shutdown of its venues, which include London's Lyceum and Savoy theatres.

The investment underlines the scale of the challenge facing entertainment businesses, with social distancing measures expected to remain in place for many months, drastically reducing the revenue potential of venue-owners with high fixed costs.

ATG is one of the most prestigious theatre groups in the world, owning scores of famous sites in Britain, Germany and the US.

Its UK portfolio includes Liverpool's Empire Theatre, and the Duke of York's Theatre, the Piccadilly and the Apollo in London.

On Broadway, it owns the Lyric and Hudson.

The company has a workforce of more than 4,000 full-time equivalent employees.

ATG theatres have been home to some of the world's most successful plays and musicals, including The Lion King, Les Miserables and Wicked.

Since the COVID-19 outbreak put Britain into lockdown in March, live entertainment groups - like those in many other industries - have scrambled to reorganise their finances. 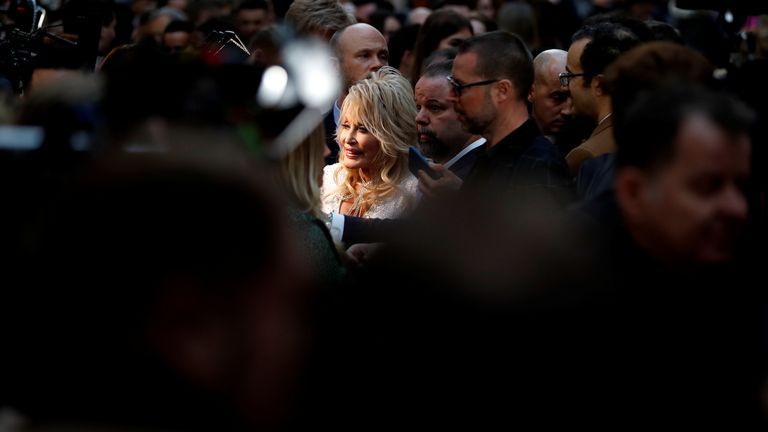 Image: Dolly Parton arrives for the West End debut of 9TO5 The Musical at the Savoy Theatre last year

One source said the £50m equity injection from Providence was likely to be "the first step" in a financial support package for the business.

"Theatres are going to be among the last businesses to return to anything like normality," one industry insider said.

"This is going to be a very long haul."

ATG was founded in the 1990s by the husband-and-wife team Sir Howard Panter and Dame Rosemary Squire, who have since gone on to set up a rival theatrical group.

The company is run by Mark Cornell, who joined the company four years ago, having been an executive at the luxury goods owner LVMH and Sotheby's, the auctioneer. Image: Since the COVID-19 outbreak, live entertainment groups have scrambled to reorganise their finances.

Providence bought ATG in 2013 in a £350m deal, and has since overseen a stellar increase in revenues and profits, with massive hit shows including Harry Potter and the Cursed Child.

The US-based buyout firm had been preparing to run a sale process for the business during the course of the year, hiring the investment banks Goldman Sachs and Jefferies to oversee an auction.

That process is expected to be delayed indefinitely because of the impact of the coronavirus crisis.

The group also owns a ticketing business, which The Sunday Times reported last weekend had faced some criticism from customers over delays and discounts to refunds for tickets booked for performances during the pandemic.