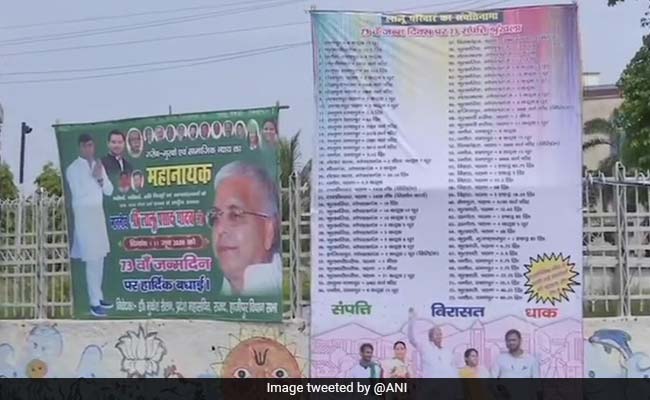 Rival posters were put up in Patna by RJD, JDU on Lalu Yadav's birthday.

Early this morning, state capital Patna woke up to twin posters by the two parties. While Mr Yadav's Rashtriya Janata Dal greeted him on his birthday, posters up by the ruling JDU, listed what they claimed were 73 properties acquired by Mr Yadav and his family using political influence.

"The list of properties acquired by political muscle power is still being compiled," read the JD(U) posters in a reminder of the allegedly illegal properties, which acted as a trigger for their split three years ago.

For JDU, the immediate  provocation was a comment by Tejashwi Yadav, Bihar's opposition leader and Lalu Yadav's son and political heir.

"Tomorrow we will celebrate Lalu-ji's birthday as 'Garib Samman Diwas'. Instead of cutting a cake or lighting candles, we will feed the poor," Tejashwi Yadav was quoted as saying by news agency ANI.

Then came the sting: "We worry about the poor, unemployment & farmers while the state government only worries about elections," Tejashwi Yadav had said.

The 30-year-old leader had also retweeted the news agency.

Amid the countrywide migrant crisis, the ruling alliance of Chief Minister Nitish Kumar's JDU and the BJP had launched their campaign for the state elections, due in October-November, earlier this week.

The BJP's Amit Shah had held a virtual address which Nitish Kumar started a week-long interaction programme with his party's district chiefs. Mr Yadav and his party had lodged their protest by clanging utensils, which was also seen as a campaign launch of sorts.

The situation of the migrant labourers has become a political issue in Bihar, which has the largest number of migrants. The opposition has been regularly invoking the issue and criticizing the Chief Minster for what they have called his reluctance to get the migrants back. They have also criticized him for the lack of a substantial  package for migrants' welfare.

On Sunday, Amit Shah addressed the issue during his virtual rally.

"Leaders are trying to hoodwink the janta (people) of Bihar. But you should distance yourself from these talks, especially migrant workers. Remember, the whole country appreciates you. When you look at the foundations of the developed states, you will find the mehek of Bihar in their foundations," Mr Shah had said.

BSP plus Brahmin voters an unbeatable combination in UP, says Satish Mishra