The acting head of the Capitol police will testify before a House committee as Congress continues to probe the violence.

United States Capitol Police were aware of the possibility of violence from armed extremists when the Capitol was attacked by supporters of former President Donald Trump, but intelligence did not indicate the possible scale of the event and officers became overwhelmed by “insurrectionists”, the acting police chief is set to testify in a House hearing.

Intelligence collected ahead of the January 6 assault on the Capitol suggested that the gathering would have the participation of armed “militia members, white supremacists, and other extremist groups,” Yogananda Pittman said in prepared testimony to be delivered on Thursday before the House Appropriations Committee.

Pittman was the assistant chief of police of the department’s Protective and Intelligence Operations and was responsible for its Intelligence and Interagency Coordination Division (IICD) on the day of the riot, which came after weeks of Trump claiming that the election had been “stolen” and moments after the former president held a rally urging his supporters to “fight” the results.

The IICD said in an assessment issued on January 3 that Trump supporters saw January 6 as the last opportunity to overturn the results of the presidential election and their sense of desperation and disappointment “may lead to more of an incentive to become violent”.

“While the Department was prepared to neutralise and remove individuals or groups engaging in civil disobedience or violence among the demonstrators, it was quickly overwhelmed by the thousands of insurrectionists (many armed) who immediately and without provocation began attacking officers, bypassing physical barriers, and refusing to comply with lawful orders,” Pittman added.

“The Department’s preparations were based on the information it gathered from its law enforcement partners like the FBI and others within the intelligence community, none of which indicated that a mass insurrection of this scale would occur at the US Capitol on January 6th,” she said.

Pittman also says the department faced “internal challenges” as it responded to the riot. Officers did not properly lock down the Capitol complex, even after an order had been given over the radio to do so. She also says officers did not understand when they were allowed to use deadly force, and that less-than-lethal weapons that officers had were not as successful as they expected.

The Capitol attack delayed the certification of Biden’s win by several hours, as lawmakers were forced to flee the angry mob that overwhelmed security forces. Five people died in the violence.

More than 200 people have been charged so far for their roles in the riot, including some with ties to far-right fringe groups such as the Oath Keepers and Proud Boys.

Pittman’s testimony comes as Congress continues to probe the January 6 violence and the security failings that led to it. 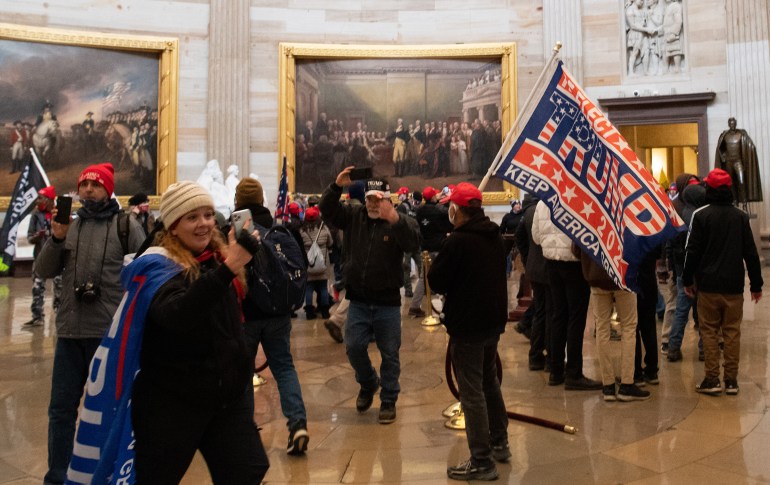 Supporters of US President Donald Trump breeched security and entered the Capitol as Congress debated the 2020 presidential election vote certification [File: Saul Loeb|/AFP]The inquiries come in the wake of Trump’s acquittal on February 14 in a Senate trial after being impeached on the charge of “incitement to insurrection” for his role.

Legislators have also said they will set up a 9/11-style independent commission to investigate the riot.

An FBI warning that a protest by Trump supporters could turn violent reached the US Capitol Police the day before the assault, but top officials in charge of securing Congress that day did not see it, they told lawmakers on Tuesday.

Pittman’s predecessor, Steven Sund, said that while the Capitol police force had prepared for “the possibility of violence” and armed protesters, they had not trained for the “possibility of a coordinated military-style attack involving thousands against the Capitol”.

Sund also testified that he had requested National Guard troops to be deployed two days before January 6, but was told by the former House sergeant at arms, Paul Irving, that “he was concerned about the ‘optics’ of having National Guard present”.

Irving on Tuesday denied that optics played a role in the decision to not pre-emptively deploy National Guard troops, saying instead the “intelligence did not warrant it”.