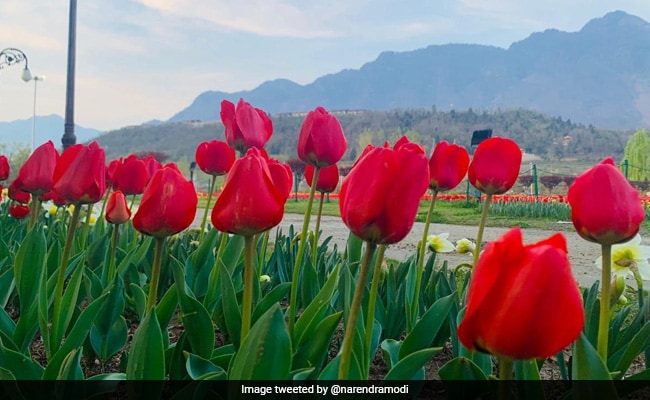 Prime Minister Narendra Modi took to Twitter on Wednesday and gave a glimpse of the ''majestic tulip garden in the foothills of the Zabarwan Mountains'' in Jammu and Kashmir. ''Tomorrow, 25th March is special for Jammu and Kashmir..., the Prime Minister tweeted. The tulip garden, with over 15 lakh flowers, will be thrown open to visitors. The government has been trying to boost the tourism sector in the Union Territory, which employs a large number of people.

Tomorrow, 25th March is special for Jammu and Kashmir. A majestic tulip garden on the foothills of the Zabarwan Mountains will open for visitors. The Garden will see over 15 lakh flowers of more than 64 varieties in bloom. pic.twitter.com/LwRPglZ1jO

The tourism department of Jammu and Kashmir also posted a stunning video of the tulip garden and invited people to visit. ''Experience the tulip bloom...visit with family and friends...,'' it said.

The tulip garden, formerly known as Siraj Bagh, on the banks of Dal Lake is a major tourist attraction. The garden boasts of over 60 varieties of tulips and the Department of Tourism organises the famous "Tulip Festival" every year.

Earlier the Governer of Jammu and Kashmir tweeted a teaser to attract tourists. ''Come spring, Tulips will bedeck paradise again. The preparations to reopen Asia's biggest Tulip garden are in full swing. More than 1.5 million tulips will be showcased this year in the beautiful garden nestled on the foothills of Zabarwan mountain range.''

Come spring, Tulips will bedeck paradise again. The preparations to reopen Asia's biggest Tulip garden are in full swing. More than 1.5M tulips will be showcased this year in the beautiful garden nestled on the foothills of Zabarwan mountain range. #TulipFestival#jktourismpic.twitter.com/rvng3ovel6

Tulips have their origin in Iran and were introduced to Europe in the 17th Century, according to the tourism department. Today, the largest number of tulips are produced in the Netherlands.

The bright spring flowers signifying love are much in demand across the world. Tulip festivals are also held in many countries like the Netherlands, Switzerland, United States and Canada during the spring season. Tulips are also popular in Australia and several festivals are held in September and October, when it's spring in the Southern Hemisphere.