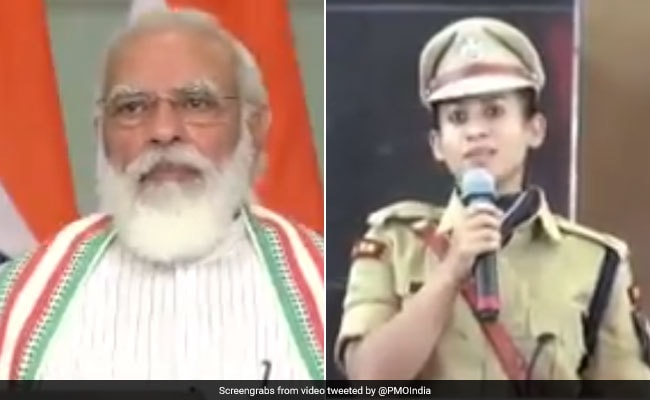 Responding to a woman IPS probationer, PM Modi praised the people of Jammu and Kashmir

Women police personnel can engage with mothers of children in Jammu and Kashmir to prevent the youngsters from taking the "wrong path", Prime Minister Narendra Modi said, while lavishing praise on the people of the Union Territory, hit by the menace of terrorism.

Addressing the 2018 batch of IPS probationers at the Sardar Vallabhbhai Patel National Police Academy in Hyderabad via video conferece, he also cautioned them not to indulge in wrongdoings and said they would land in troubles with the latest technologies, which are also useful in better policing.

Responding to a woman probationer, PM Modi heaped praise on the people of Kashmir, saying they are ''lovely'' people and having special ability to learn new things.

"I am very connected to these people. They treat you with so much love...All of us together, we have to work towards stopping the children from taking a wrong direction."

"And this can be done by our women police officers efficiently. Our women force can effectively work in educating the mothers and bringing back those children. I am confident if you do that, in the initial stage itself we can prevent our children from getting into the wrong path," PM Modi said.

He was apparently referring to the youth being radicalised and made to join terror groups in Jammu and Kashmir.

Now-a-days technology plays an important role in crime detection, be it CCTV footage, mobile tracking...it helps you in a big way. But, the same technology is also responsible for suspension of police personnel at times..., PM Modi said.

The way technology is helpful it is also becoming a cause of musibat (problems)...and police are subjected to it more, he added.

He further said the police officials need to train people to see how technology can be used to its maximum and in a positive way as big data and artificial intelligence, social media were the new age technologies which can be used as weapons for better policing.

The ''humane'' side of the police force in the country came to fore during the coronavirus pandemic and the security personnel did a commendable job.

During coronavirus times, Police used to sing songs to create awareness, used to feed the poor and take patients.

These scenes were witnessed by people... During the coronavirus, humanity worked through Khaki uniform, he said.

He also counselled the new officers -- not to be influenced by films like "Singham" that portrayed super cops, saying some police personnel want to first show-off but miss out on main aspects of policing.

"Some policemen who join new duty want to first show-off ... scare people... And anti-social elements should shiver from hearing my name itself.... after watching films like "Singham", it gets over their mind and because of it those works which need to be done get missed out," PM Modi noted.

Replying to one of the cadets from Tamil Nadu on managing stress among police personnel, PM Modi said farmers also face stress if there was unwanted variation in rainfall.

He also noted that yoga and pranayama were great ways to beat the stress.

Police stations should be kept clean and neat and also made centres of social trust, Modi said.

Asking police personnel to always respect the power of society, he said officers should leverage the inherent strength of the society for achieving citizen friendly objectives.

As many as 131 probationers, including 28 women, of the Indian Police Service of 2018 batch successfully completed their training in the academy.

Kiran Shruti DV, the best all-round probationer of the batch, led the parade.