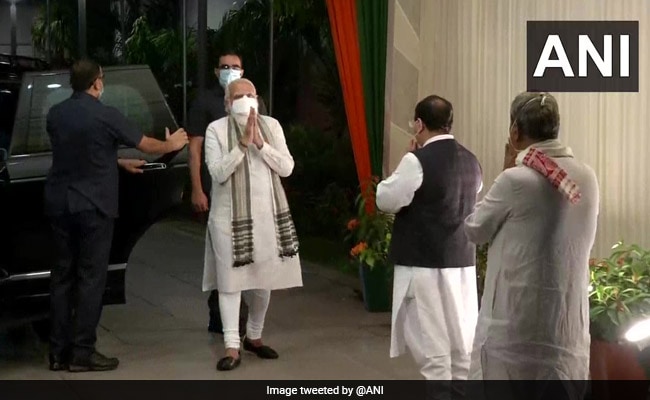 PM Modi arrived the meeting of the BJP CEC at its headquarters in Delhi.

Prime Minister Narendra Modi and Union Home Minister Amit Shah arrived at the headquarters of the BJP in Delhi on Saturday where the party is expected to discuss the list of candidates for the upcoming assembly election in Bihar.

This will be the second meeting of the Central Election Committee or CEC of the BJP for the October-November polls.

The BJP had earlier this week formally inducted the Vikassheel Insaan Party (VIP) into the National Democratic Alliance (NDA) and assigned the party 11 seats as part of seat distribution among allies for the Bihar polls.

The party, which is considered to have influence among extremely backward classes (EBCs) in the state, will take up the slot vacated by Chirag Paswan's Lok Janshakti Party (LJP) which severed ties with the Nitish Kumar-led coalition in Bihar.

Janata Dal-United (JDU), on the other hand, had earlier this week released a list of 115 candidates for the Bihar Assembly polls. The party has denied tickets to 11 of its sitting MLAs while accommodating the turncoats.

The BJP and the JDU had agreed to contest on 121-122 seats respectively in the 243-member assembly. JD-U, which has a share of 122 seats according to the understanding, has given seats to Hindustani Awaam Morcha of Jitan Ram Manjhi from its quota.

Elections in the state will be held in three phases beginning from October 28 and the results will be declared on November 10.