Pete Davidson: 'It's OK to struggle and you are not alone'

Pete Davidson says working on his latest movie, The King Of Staten Island, helped him process the death of his father 19 years ago.

The Saturday Night Live comedian told Sky News' Backstage podcast: "As someone who's open with struggles and issues, I think I'm always learning and growing. Making this film allowed me to grow more as a person. "One of the main reasons why I wanted to make this [film] and tell this story was because I wanted this chapter in my life to be closed.

"Not forgotten, but I wanted to be able to move on and show that it's OK to have issues and it's OK to struggle and that you're not alone and that there is a light at the end of the tunnel."

The comedy-drama is semi-autobiographical, exploring Davidson's experiences growing up in Staten Island, New York, while dealing with childhood loss. Image: He's in his mid-20s and still living at home with his mum. Pic: Universal/The King Of Staten Island

Scott Davidson, who was a firefighter, died while responding to the World Trade Center attack on 11 September 2001, when Pete was just seven years old.

In the movie, Davidson's character - who is also called Scott - is struggling to come to terms with his death and battling with his mental health.

It's a struggle the comedian understands, having previously dealt with his own depression and borderline personality disorder. 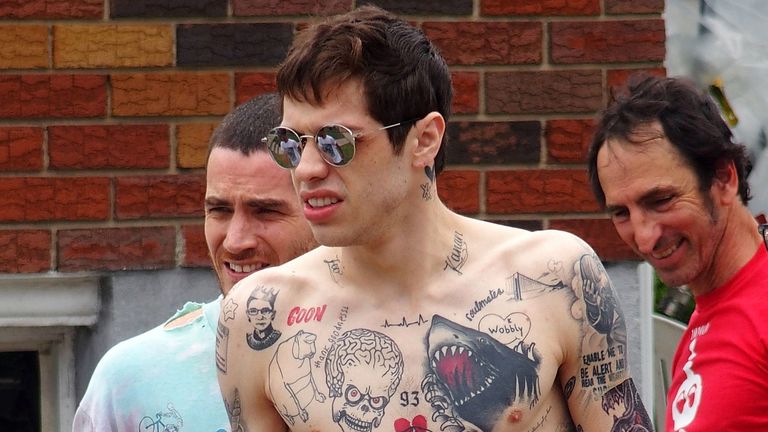 Image: Pete Davidson says making the indie movie has been a turning point in his life

Back in 2018, fans were so worried about his welfare after he posted troubling remarks on Instagram, it prompted a check-in from police.

Davidson says he was able to explore those dark feelings thanks to "open and honest conversations" during the making of the film.

While the 26-year-old admits he was "scared at first" he credits the cast and crew with "making me feel very comfortable and allowing me to really dive into the role". Director Judd Apatow, who's known for his big commercial comedies, says his favourite stories are actually about "people who are struggling, and people in pain".

He told Backstage that working with American comedian Garry Shandling taught him "stories are about people who love each other, but something's getting in the way".

He also says a lot of what Davidson has been through is universal: "Even though it's a specific thing, it's something that we all go through - loss and how our families react to it and how it can hold us back if we haven't fully healed."

He credits Davidson with opening himself up to the film totally: "It's always very exciting to collaborate with someone that wants to go all the way, because most people don't.

"It's rare that somebody says, 'No, I'm going to share everything with you'."

Steve Buscemi, who plays Papa, a veteran firefighter who takes Scott under his wing in the movie, says he jumped at the chance to be involved.

Buscemi told Backstage: "I just felt privileged to be there and to be able to be doing a scene with Pete, who actually lost his firefighter dad on 9/11, and knowing that everything he was saying was coming from a real place."

He says he's under no doubt Davidson suffered from post-traumatic stress disorder after his father's death but credits his humour with getting him through it. Image: Many scenes are based on real-life moments. Pic: Universal/The King Of Staten Island

"He's a sweet kid who's been through a lot, and he's learned in some ways to deal with it through his comedy. That's very admirable."

Many moments in the film were inspired by real life, with one pivotal scene in which Scott argues with his sister (played by Apatow's daughter Maude) based on a real-life blow up with Davidson's own younger sister, Casey.

Apatow says it's tapping into moments that were stressful at the time, but when looked back on can appear funny, that were key to the film.

Davidson's love of body art is also explored in the movie, with Scott aiming to become a tattoo artist and open his own "tattoo restaurant".

In real life Davidson has over 100 inkings which are regularly on show in the film, including the bunny ears logo he had inked behind his ear while dating pop starlet Ariana Grande. 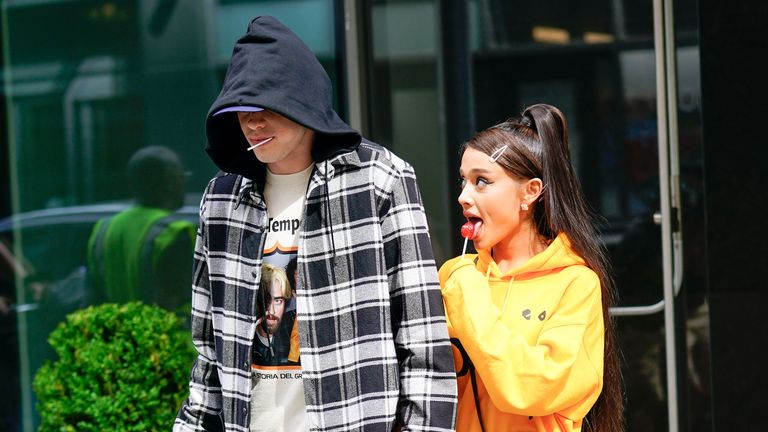 While that body art is now hidden away (it's covered over with a heart), it is through the journey of this film that Davidson hopes to uncover the next stage of his life.

The film begins with a scene in which Scott shuts his eyes tight to the outside world but ends with him looking up at the Manhattan skyline where the Twin Towers used to be.

Davidson says it's a symbol for his character "seeing hope for the first time", and it's a hope he wants to share with others.

"I wanted to let people know is that you're not alone and there is a way that you can heal."

The King Of Staten Island is available now on streaming platforms including Amazon Prime Video and Apple TV.

Hear more from the interview and a review of the film on this week's episode of Backstage - Sky News' entertainment podcast.