The Palestinian Authority (PA) has condemned Israel’s promise to send coronavirus vaccines to far-away countries while ignoring the five-million-strong Palestinian population living kilometres away under its military occupation as an “immoral measure”.

On Thursday, Honduras received its first shipment of COVID-19 vaccines from Israel, after Israeli media reported earlier this week the government’s intention to send vaccines to the Central American country, in addition to Guatemala, Hungary and the Czech Republic.

Israel’s Kan Public Broadcasting reported that 100,000 Moderna vaccines will be shipped to 15 allies, as well as several countries in Africa that have strong or growing ties with Israel.

Guatemala followed the United States’s controversial decision to move its embassy to Jerusalem last year, while Honduras has promised to do the same.

Hungary has set up a trade mission office in Jerusalem, and the Czech Republic has pledged to open a diplomatic office in the city as well.

The PA’s minister of foreign affairs, Riyad al-Malki, said Israel’s decision to provide vaccines to countries in exchange for political concessions is a form of “political blackmail and an immoral measure”.

In an interview with Voice of Palestine radio on Thursday, al-Maliki said the decision “confirms the absence of morals and values” of Israel.

“We will carry out an international campaign to confront this exploitation of the humanitarian needs of these countries,” he said.

Coronavirus cases in occupied East Jerusalem, the West Bank and Gaza Strip have reached more than 203,000. At least 2,261 people have died from the virus, and on Wednesday, PA Health Minister Mai al-Kaila said the number of coronavirus cases has been increasing sharply.

The occupancy rate in hospitals in the occupied West Bank is the highest since the start of the pandemic, al-Kaila added, at 80 percent. 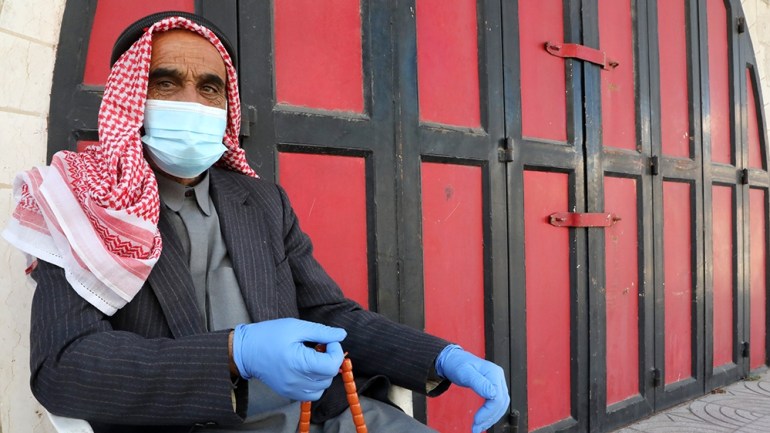 An elderly Palestinian sits with mask and latex gloves outside a closed shop in Hebron in the occupied West Bank on July 2, 2020 [File: Hazem Bader/AFP] Vaccine soft power

Yara Asi, a post-doctoral scholar at the University of Central Florida who studies health and development in conflict-affected states, called out Israel’s vaccine soft power.

“To use the promise of life-saving medicine to pressure low-resource nations to potentially move embassies or make other complex political decisions is political cynicism of the highest regard,” she told Al Jazeera.

“These transactions also allow Israel to provide some vaccines to Palestinians under the same auspices of ‘charity’, further muddling their legal duties as an occupying power and treating Palestine as though it’s just another poor country that needs help, and not a territory in which Israel has almost complete economic and political control.”

Under the Fourth Geneva Convention, Israel as an occupying power must ensure “the adoption and application of the prophylactic and preventive measures necessary to combat the spread of contagious diseases and epidemics”.

UN officials and human rights groups have said Israel is an occupying power responsible for the wellbeing of the Palestinians. Israel said that under interim peace accords from the 1990s, it has no such obligations. 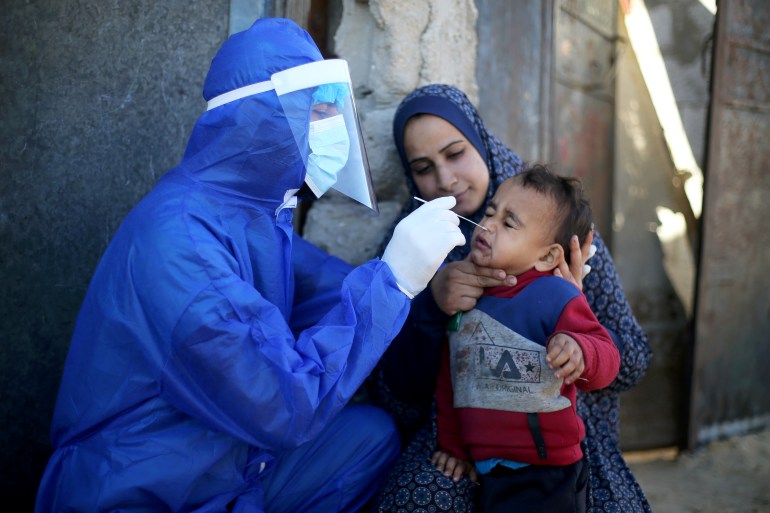 A Palestinian medical worker collects a swab sample from a boy to be tested for the coronavirus disease (COVID-19), in the southern Gaza Strip, January 14, 2021 [File: Ibraheem Abu Mustafa/Reuters]It has already supplied vaccine doses to more than half of its 9.3 million people in just less than two months, making it the world leader in the vaccination drive to inoculate populations. However, despite announcing last month that it would deliver 5,000 doses of vaccine to the PA, only 2,000 have been received so far.

It separately received 22,000 Sputnik vaccines from the United Arab Emirates but health officials in Gaza said they need 2.6 million doses to inoculate all people over the age of 16.

“Israel’s hand picking of countries to help based on whether it sees a political benefit to such help is something else entirely,” Asi said.

“To do this while elderly and high-risk Palestinians living literally miles away await vaccines that, for most Palestinians will not come for months or even in 2021 at all, is blatant disregard for the five million people living under Israel’s occupation for more than 50 years.”

US Senator Bernie Sanders has condemned Israel’s move to send vaccines to other politically aligned countries before distributing them to Palestinians.

“As the occupying power, Israel is responsible for the health of all the people under its control,” Sanders tweeted on Wednesday. “It is outrageous that [Israeli Prime Minister] Netanyahu would use spare vaccines to reward his foreign allies while so many Palestinians in the occupied territories are still waiting.

As the occupying power, Israel is responsible for the health of all the people under its control. It is outrageous that Netanyahu would use spare vaccines to reward his foreign allies while so many Palestinians in the occupied territories are still waiting. https://t.co/kx4qFPtRQl

Objections have also been raised within the Israeli government, but issues are centred on technicalities rather than a responsibility to prioritise inoculating Palestinians under Israeli occupation.

According to Israeli daily Haaretz, Defence Minister Benny Gantz asked Prime Minister Benjamin Netanyahu to immediately halt the process of sending coronavirus vaccines to foreign countries – and to consult with the security cabinet before undertaking such decisions.

“The vaccines are the property of the State of Israel and when you said that ‘unused vaccine doses have accumulated,’ while most of the population of Israel has not yet been vaccinated with the second dose, is false,” said Gantz in a letter to Netanyahu, the national security adviser and attorney general.

Netanyahu, who is up for re-election on March 23, has staked his political success on Israel’s successful vaccination drive.

Asi pointed out that the UN-backed COVAX programme – designed to provide poorer countries with vaccines at the same time that rich countries receive them  – is integral to ending this pandemic, but operates with a degree of “equity and nondiscrimination”.

“Essentially, the message is that providing vaccines to Palestinians is just not politically beneficial enough to make a priority,” she explained.

“And Netanyahu has gambled that, with just a month until a tough election, it is worth weathering the global condemnation Israel is receiving for ignoring Palestinians for his own political interests.”