Mohammad Ikram was born without arms but hasn’t let anything stop him from fulfilling his childhood dream of playing the game.

Mohammad Ikram leans over the snooker table, his face at almost touching the white ball as he assesses his options, then hits it with his bearded chin and sends it flying.

At the other end of the table a moment later, a red ball sinks into the corner pocket.

With a twist of the neck this way, or a lighter nudge another, 32-year-old Ikram has worked out how to pot snooker balls without a cue stick.

Ikram, who lives in a rural town in Pakistan’s northeastern Punjab province, was born without arms. But he has not let that stop him from fulfilling his childhood dream of playing the game of snooker. 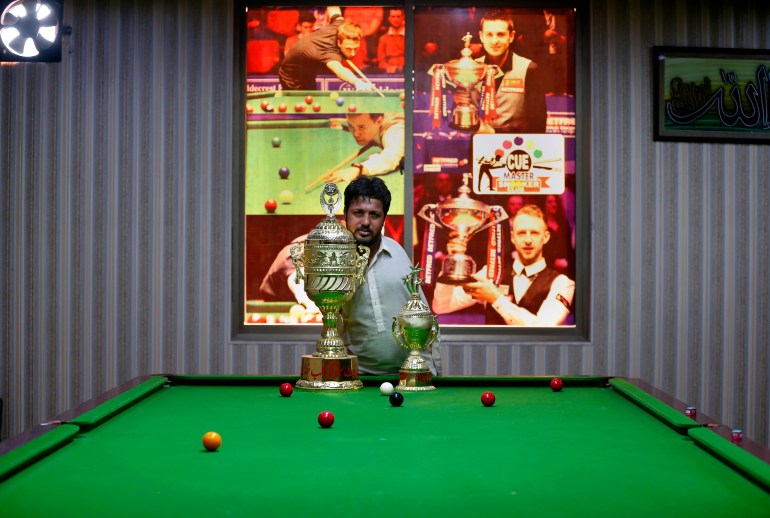 Mohammad Ikram, who play snooker with his chin, poses for a photograph with his trophies at a local snooker club in Samundri, Pakistan [Anjum Naveed/AP]Ikram remembers watching other children playing on dusty pool tables outside his home when he was 10. He wished he could play the game one day, but needed to work out how.

“At that time, I wished I had my arms so I could play the game too,” Ikram told The Associated Press.

Eventually, he devised his own style and later went to a nearby club, looking for a game.

“People in the club didn’t believe that I could play with my chin,” he said. “But they gradually started admiring my skills when I started hitting the cue ball with my chin.”

Ikram, right, walks with his mother Rizia Bibi at home in a village near Samundri, Pakistan [Anjum Naveed/AP]Mohammad Nadeem, owner of the Cue Club in Samundri, recalled the time about 10 or 12 years ago when Ikram approached him with a request to play snooker.

It is a good thing Ikram refused to take no for an answer.

“When he first hit the ball with his chin, it simply amazed me because it was as good as any other snooker player could have hit it with a cue in hand,” Nadeem said. 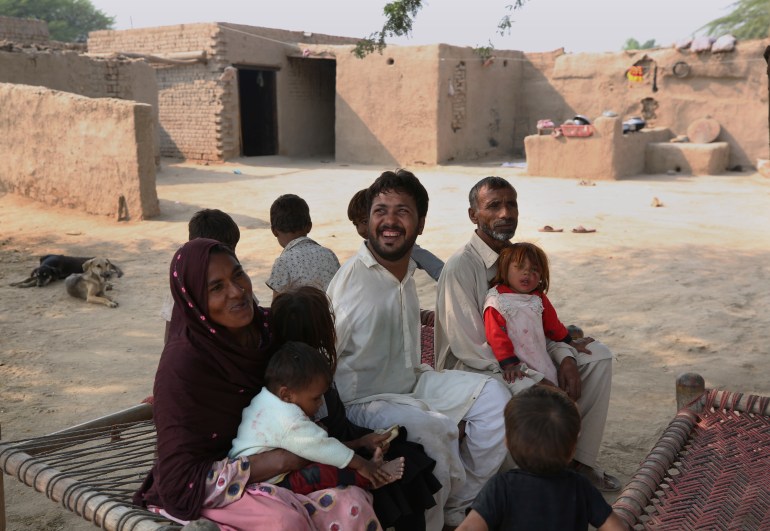 Ikram with his family at their home in a village near Samundri, Pakistan [Anjum Naveed/AP]So Ikram started making the 12-km (7.5-mile) daily trip to the club, where he plays on one of its seven tables.

Ikram has won at least three local tournaments and his popularity is growing fast – not only in his hometown but also across Pakistan, mainly because of the media attention.

Ikram, who has two younger brothers and five younger sisters, holds a special place in his mother’s heart.

“I don’t go out and watch him play but his father has seen him playing and we are happy for him,” Ikram’s mother, Razia Bibi, said.

“We used to say that had he got arms, he would have been very happy. But now the whole world will be happy when they see him playing.”

Ikram said he wanted to show off his snooker skills overseas and was hoping to get some support from the government and Prime Minister Imran Khan, the former cricket star who led the Pakistan team to victory in the 1992 World Cup.

“I wish I could go abroad and play in front of other people and bring fame to Pakistan,” Ikram said as he rested his right leg on the table, flexed his neck and yet again hit the cue ball with his chin and potted a red ball in the long pocket. 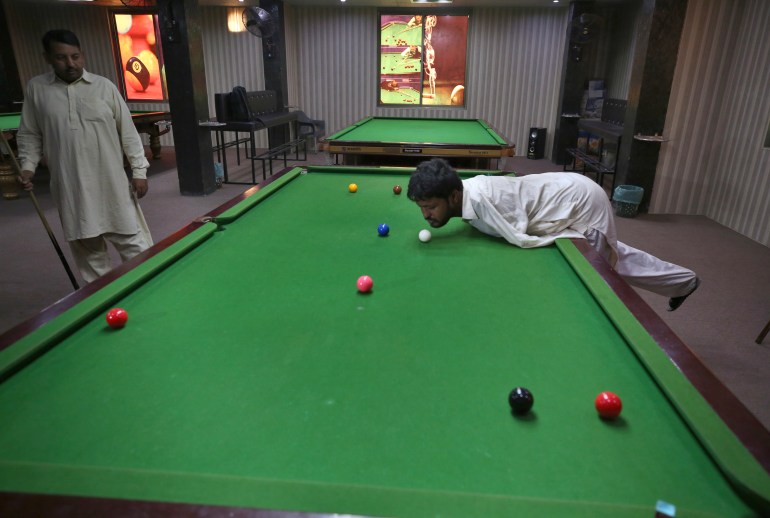 Ikram plays snooker with his chin at a local snooker club in Samundri, Pakistan [Anjum Naveed/AP]