Beijing reported its first instance of a local transmission in weeks - a 52-year-old man who said he had not left the Chinese capital for more than two weeks and had not been in contact with anyone from outside the city.

Neil Ferguson, an epidemiologist at Imperial College London, whose modelling helped set the United Kingdom's coronavirus strategy, says the country's death toll could have been halved if lockdown had been introduced a week earlier. The UK has more than 291,000 cases and at least 41,000 deaths. More than 7.48 million people have now been confirmed to have the coronavirus and at least 420,000 have died, according to data from Johns Hopkins University.

Pakistani Prime Minister Imran Khan has warned citizens that the number of deaths from the coronavirus will continue to rise in the country, as the death toll hit a single day record of 107 on Thursday.

Addressing the nation, Khan continued to rule out imposing any widespread lockdown, as per the World Health Organisation's advice, saying that instead there would be greater monitoring of social distancing and hygiene directives, with businesses that do not comply being shut down.

An experimental drug developed by an Australian researcher could help prevent deaths from COVID-19 by controlling the formation of blood clots responsible for breathing difficulties, organ failure, stroke and heart attack.

About three in four of critical COVID-19 patients in ICUs develop clots with their recovery rate critically low, said Professor Shaun Jackson from the University of Sydney and the Heart Research Institute.

Following successful phase-one trials in 72 healthy patients, the researchers now want to urgently move into phase two trials by testing the effectiveness and safety of the drug in critically ill COVID-19 patients.

South Korea will extend physical distancing guidelines until daily new infections drop to single digits, the health minister said, failing which he warned of a return to tougher measures.

Park Neung-hoo urged residents of the Seoul metropolitan area to stay home as much as possible as new cases have persisted in the mid-double digits daily, with 56 new cases reported at the end of Thursday. Public facilities, including night life spots, religious establishments, museums, and parks, will remain closed.

Tougher social distancing rules will be considered if 50 daily infections persist for more than two weeks, depending on the number of new outbreak clusters, Park added. 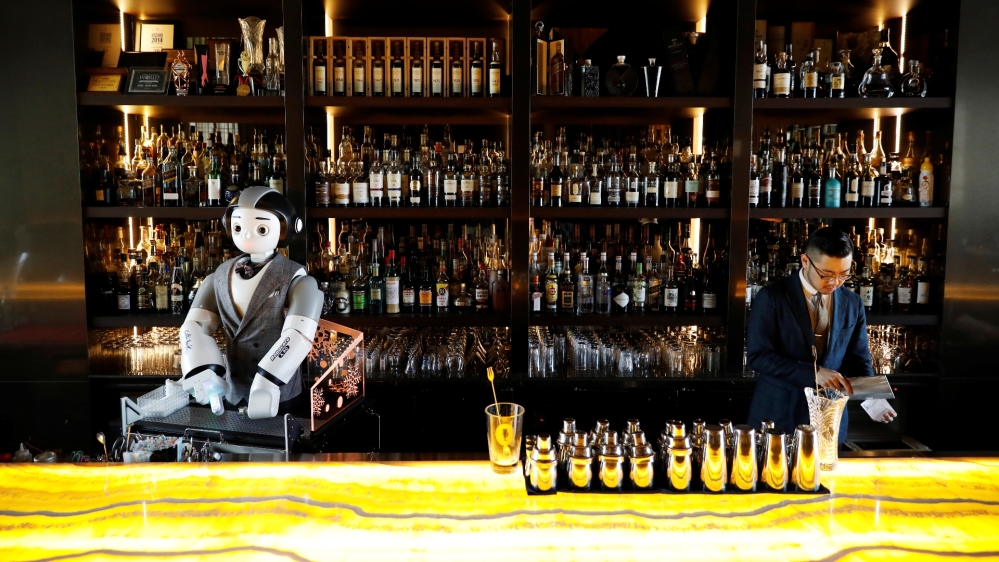 An ice carving robot for minimising human contact to avoid the spread of the coronavirus disease is seen during its demonstration at a bar in Seoul, South Korea, June 3, 2020 [Kim Hong-Ji/ Reuters]

Singapore-based electronics maker PCI has won a bid to supply 300,000 dongles for a government project that could eventually see everyone in the city-state given the wearable device to help identify people who have interacted with COVID-19 carriers.

The $6m Singapore dollar ($4.3m) tender, equivalent to S$20 a unit for the bluetooth-enabled TraceTogether Tokens, was awarded by Singapore's Government Technology Agency to the firm on May 14, according to a government notice.

The pilot project comes after an earlier smartphone-based contact tracing app had limited take-up as it did not work efficiently on some devices.

Like the app, the token will use Bluetooth signals to record nearby devices but cannot capture location data and does not have internet or cellular connectivity, according to the government, which has pledged to protect user privacy. 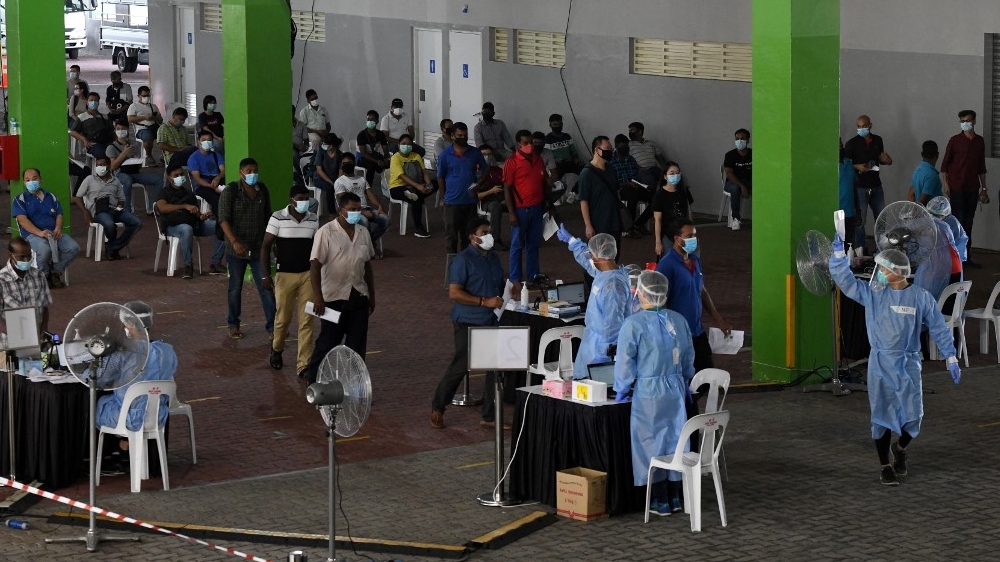 Essential workers queue to take a nasal swab test to detect the new coronavirus before returning to work in Singapore on June 10, 2020 [Roslan Rahman/ AFP]

05:10 GMT - Maldives to ease lockdown, but no family visits allowed

Health authorities in the Maldives say residents of the capital, Male, will be allowed to leave their homes without permits starting from June 15 as part of a phased easing of its two-month old lockdown.

Domestic airports will open, and restaurants and cafes can resume takeaway and delivery services.

The Health Protection Agency, however, is advising against visiting family members at their homes and is banning gatherings of more than three people in any public spaces.

Masks are mandatory in public spaces, it added. The Indian Ocean island nation has reported eight deaths and 1,976 infections, of which the vast majority were in the congested capital.

Australia's federal government stepped up pressure on state and territory leaders on Friday to reopen internal borders, a step viewed as key to reviving the country's coronavirus-hit economy.

Prime Minister Scott Morrison made the plea at a meeting of the national cabinet dealing with the crisis, Reuters news agency reported, citing two people with knowledge of the meeting.

"State borders should be open," Finance Minister Mathias Cormann told Sky News on Friday, adding that a second wave of infections could cost the economy A$80bn ($52bn) over the next two years. "Tourism operators in North Queensland would like to be able to draw on tourists in New South Wales."

China has reported seven new coronavirus cases, including the first instance of local transmission in Beijing in weeks.

Authorities said the other six cases were all brought into the country by Chinese citizens arriving from abroad. No new deaths were reported.

Officials in Beijing say the locally transmitted case involves a 52-year-old man who arrived alone at a clinic displaying an intermittent fever but no other symptoms. He was swiftly diagnosed as having COVID-19, prompting authorities to isolate family members and reinstate anti-virus measures in his neighbourhood.

The man said he had not left Beijing for more than two weeks and had not been in contact with anyone from outside the city. 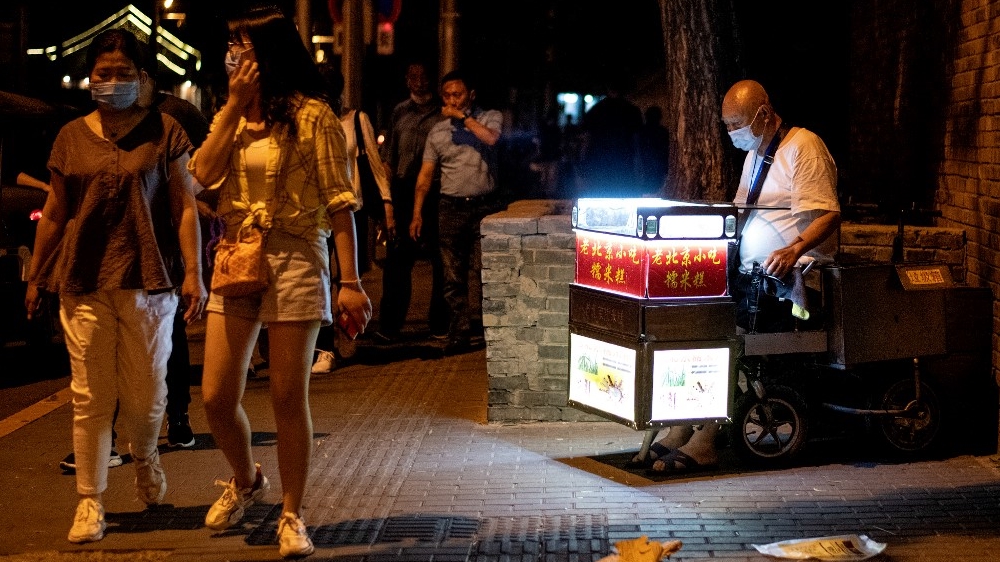 A street vendor selling sweets waits for customers along a street in Beijing on June 11, 2020 [Noel Celis/ AFP]

Surgeons in Chicago in the United States have given a new set of lungs to a young woman with severe lung damage from the coronavirus.

Only a few other COVID-19 survivors, in China and Europe, have received lung transplants. The patient, who is in her 20s, was on a ventilator and heart-lung machine for almost two months before her operation at Northwestern Memorial Hospital.

The 10-hour procedure was challenging because the virus had left the patient's lungs full of holes and almost fused to the chest wall, said Dr Ankit Bharat, who performed the operation.

"This important milestone indicates that, while the transplant procedure in these patients is quite challenging technically, it can be done safely," he said. "And it offers the terminally ill COVID-19 patients another option for survival."

“For many days, she was the sickest person in the COVID ICU and possibly the entire hospital.” A woman in her 20s is the first #COVID19 patient to receive a double-lung transplant @NorthwesternMed. Details from the press conference: https://t.co/sl7QkZuKvI. #COVIDLungTransplant pic.twitter.com/orka3YBhzj

An unpublished United Kingdom government report said that Black, Asian and minority ethnic (BAME) groups in the UK should be given targeted health advice in the event of a second wave of the coronavirus outbreak, according to Sky News.

Earlier this month, a Public Health England report revealed that Black and Asian people in the UK are up to 50 percent more likely to die after being infected with COVID-19. 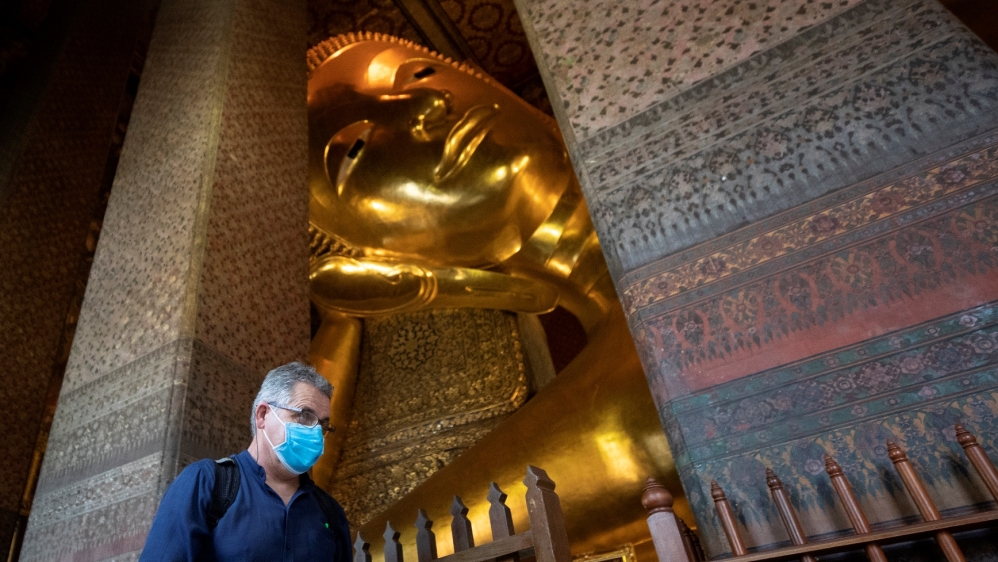 Wanda Vazquez, the governor of Puerto Rico, announced that she will lift nearly all restrictions aimed at curbing coronavirus cases, which means beaches, churches and businesses including cinemas and gyms across the US territory will reopen after three months.

Vazquez also said Puerto Rico will be officially ready to welcome tourists starting from July 15 and that airport screenings will continue.

The economic fallout from the coronavirus pandemic could plunge an extra 395 million people into extreme poverty and increase the total number of those living on less than $1.90 a day worldwide to more than one billion, according to a new report. 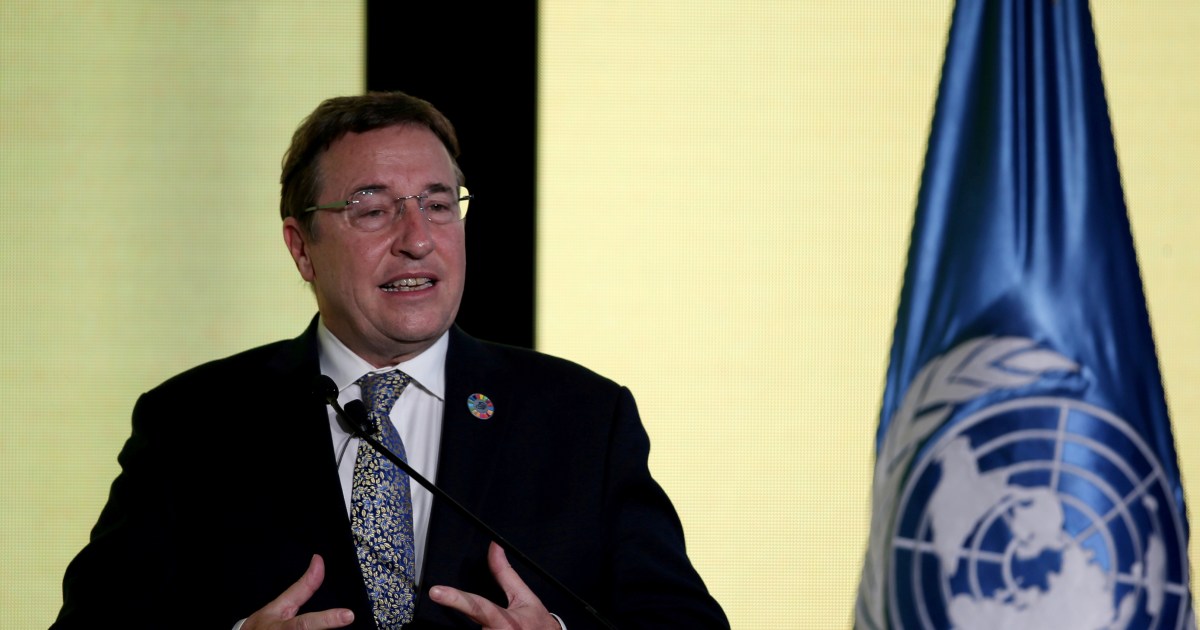 Getting SDGs back on track: A conversation with UNDP’s Steiner 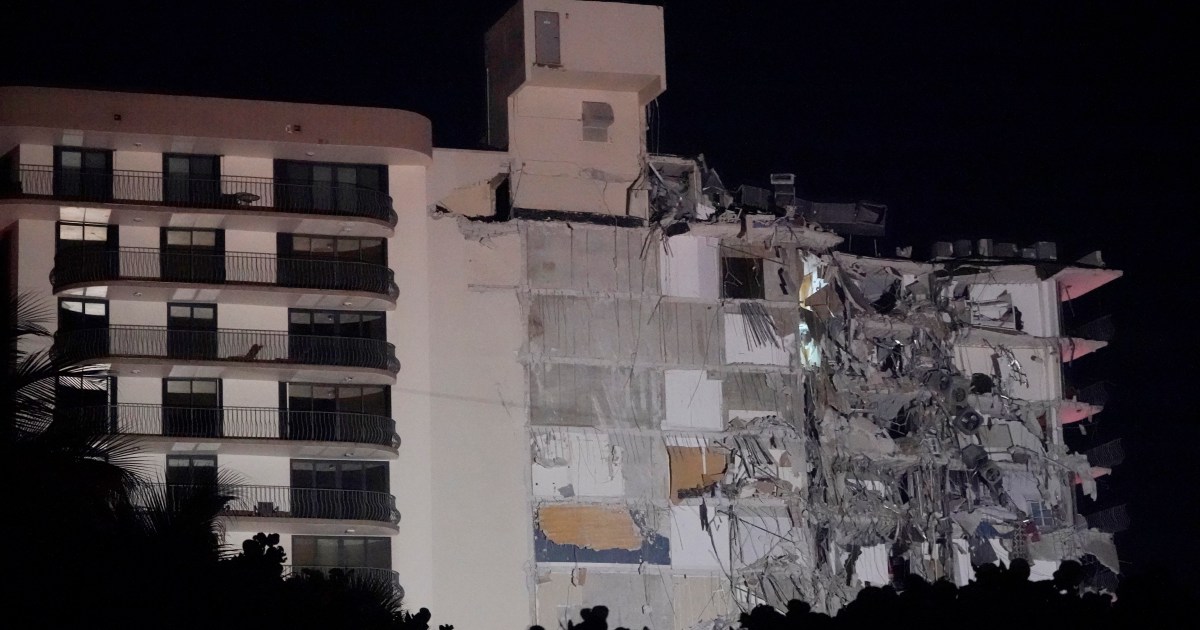 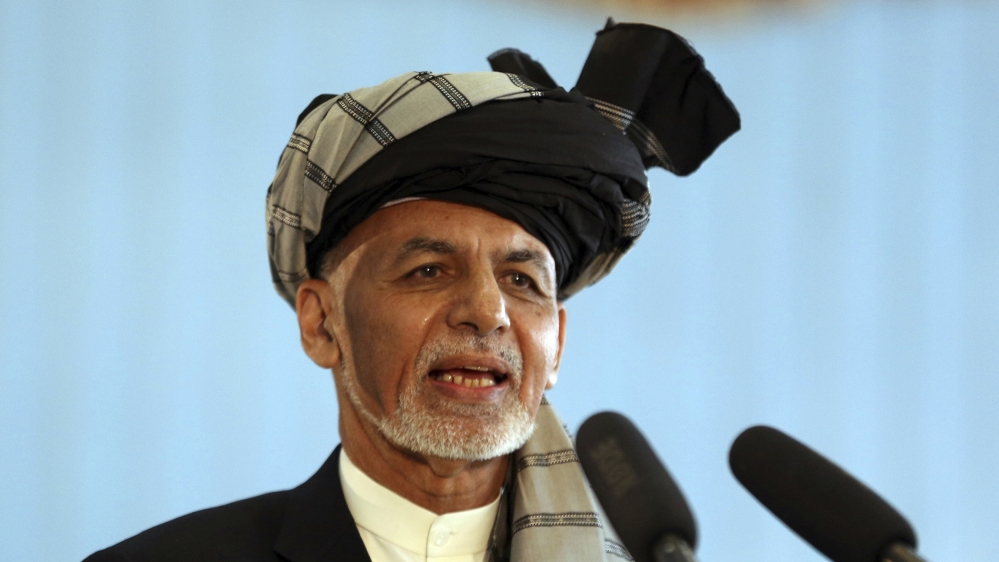