Islamabad, Pakistan – Pakistan is prepared to sit down for talks with regional rival India, with whom it came close to an all-out military conflict last year, provided that Kashmiris are provided a seat at the table, Pakistan’s national security adviser has said.

“I will tell you very honestly, in the past year, we’ve gotten messages about a desire for conversation [from India],” Moeed Yusuf told Indian journalist Karan Thapar during a wide-ranging interview on Tuesday.

“We have got to think strategically. These are two countries, have terrible relations, we need to sit down like adults,” he told Thapar. “There are […] fundamentally two issues: Kashmir and terrorism. I want to talk about both.”

He said Pakistan had specific evidence linking India’s intelligence services to the 2014 massacre of more than 130 pupils in Peshawar, a 2019 attack on a luxury hotel in southern Pakistan, a 2018 attack on a Chinese consulate in Karachi and the recent merger of several Pakistani Taliban factions into a single group.

The interview, conducted at times in a combative tone, was the first time a senior Pakistani official had spoken to Indian news media since August 2019, when India revoked a special status for the portion of the disputed territory of Kashmir that it administers.

The Pakistani NSA said there was a need for the Kashmir dispute and issues around “terrorism” to be on the agenda for any future talks. 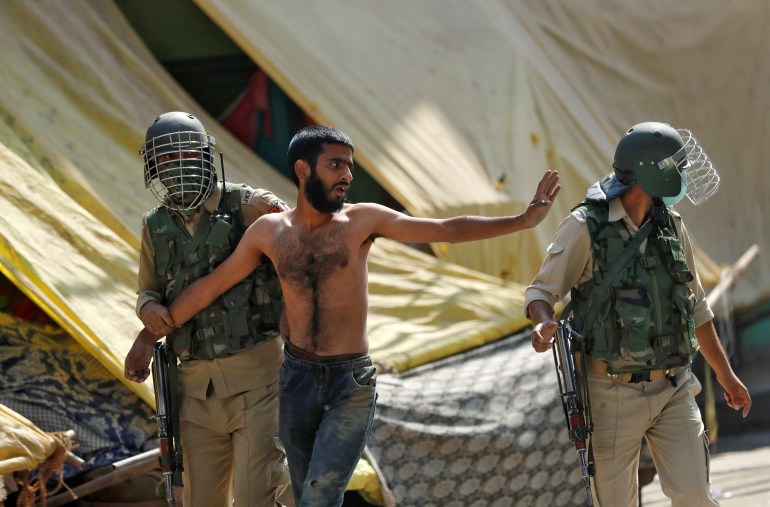 A man is detained by Indian policemen during a protest near the site of a gun battle between security forces and suspected rebels in Srinagar, Indian-administered Kashmir [File: Danish Ismail/Reuters]“There are three parties to the Kashmir dispute. There is Pakistan, there is India and there is the principal party, the humans called Kashmiris,” said Yusuf.

“If the Kashmiris can’t stand the sight of India, can’t bear to be in the same room as the Indians, how are we going to have a dialogue?”

Yusuf did not specify which group or individuals he meant specifically when he called for the “Kashmiris” to be a part of the talks.

Pakistan and India have fought two of their three wars over the disputed Himalayan territory of Kashmir, which both claim in full, but administer over separate portions divided by a Line of Control.

India’s action was sparked by the killing of more than 40 security personnel in a suicide attack in Indian-administered Kashmir’s Pulwama town, an attack India blamed on Pakistan-based armed groups.

Pakistan denies allowing armed groups to use its territory for action against other countries, specifically India.

In his interview, Yusuf also claimed India had sent a “message for a desire for conversation” with Pakistan, without elaborating further.

“But why is there a desire? In my reading, to talk, to get somewhere,” he said. “There has to be an enabling environment to talk.”

Relations between the two South Asian nuclear powers have remained frozen since India changed the constitutional status of Indian-administered Kashmir, absorbing the Muslim-majority territory into the country’s administrative and political mainstream – a move decried by Pakistan.

India’s government did not offer official comments on the interview.

However, in a report on Wednesday, India’s Hindustan Times newspaper quoted a top Indian official as saying Yusuf’s claims were “fiction” and not just “mischievous but also a pipe dream”.

“Officials added that New Delhi’s stand on holding any conversation with Pakistan had been consistent and was preconditioned on Islamabad taking concrete steps to build an atmosphere free from the shadow of terror and violence,” said the report, which did not reveal the identity of the official.

Pakistan has routinely accused India of being associated with attacks on Pakistani soil, particularly in the southwestern province of Balochistan.

On Tuesday, however, Yusuf made specific allegations against India’s intelligence agency, the Research and Analysis Wing (RAW or R&AW).

“[In] 2019, the Indian embassy funds were used, more than a million US dollars, to effect the merger [of Pakistan Taliban],” he said. “Congratulations to the RAW, they have succeeded in creating an organisation to kill Pakistanis.”

Yusuf accused RAW of being in contact with Malik Faridoon, a man he identified as the “mastermind” of the 2014 attack on a school in the northwestern Pakistani city of Peshawar that killed 132 children – one of the deadliest attacks ever on the country’s soil. 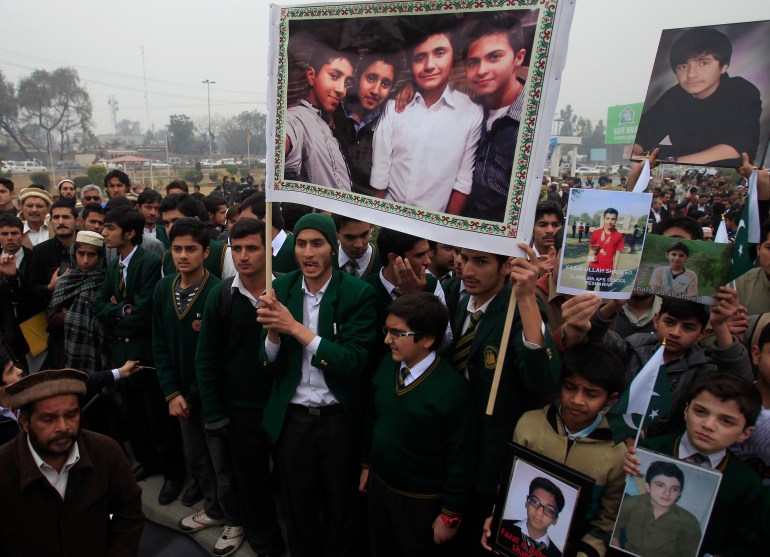 Students hold photographs of their schoolmates who were killed in a 2014 attack by Pakistan Taliban gunmen on the Army Public School, during a protest in Peshawar [File: Fayaz Aziz/Reuters]“We have records of eight phone calls, we have records of phone numbers, we have records of handlers who orchestrated this entire thing sitting in a third country,” he said.

He also linked RAW to the attack on the Chinese consulate in the southern Pakistani city of Karachi in 2018, and to an attack on a luxury hotel in the southern port town of Gwadar last year that killed five people. India denies the allegations.

Responding to Indian allegations that Pakistan had delayed the trials of those Pakistanis accused of involvement in the 2008 Mumbai attacks, which killed more than 160 people, Yusuf said the law was taking its course.

“We have to follow the course of law, and India is not cooperating in the evidence it needs to provide,” said Yusuf. “Get the witnesses over, provide the evidence, I want to end this before anybody else.”

He made similar allegations regarding the slow pace of progress in the appeal of Indian citizen Kulbhushan Jadhav, who was convicted for spying and sentenced to death by a Pakistani court in 2017.

Yusuf also responded to a question on Pakistan’s silence on the issue of the alleged persecution of Uighur Muslims in China, a strategic ally and Pakistan’s northeastern neighbour, by terming the allegations “a non-issue”.

“Even our delegations have visited, we have seen and we are 100 percent satisfied that it is a non-issue,” he said. “The West can say what it wants […] we have zero concerns.”

Al Jazeera’s Asad Hashim contributed to this report from Islamabad.