Pakistan calls for world to ‘engage’ with Taliban government

Islamabad, Pakistan – Pakistan’s national security adviser has called on the world to “engage” with the Taliban’s caretaker government in Afghanistan or risk a return to the instability that characterised the group’s last era in power three decades ago.

In an address to foreign media in the Pakistani capital, Islamabad, on Wednesday Moeed Yusuf urged the international community not to repeat past mistakes.

“We are trying to make sure that the world understands the importance of not making the mistakes of the past again,” he said.

“For us, it is an imperative to seek peace and stability in Afghanistan, that is what we are focused on.”

Yusuf’s comments come as world powers debate whether and under what conditions to recognise the new government in Kabul dominated by the Taliban, which swept across Afghanistan in a lightning offensive last month. The group seized control of the capital, Kabul, on August 15 as former President Ashraf Ghani fled the country.

Pakistan, Afghanistan’s southeastern neighbour, has repeatedly called for world powers to engage with the new government and to provide immediate humanitarian and other aid to stave off an imminent economic collapse.

On Monday, several countries pledged more than $1.1bn in food aid at a United Nations conference to address immediate poverty and hunger concerns in Afghanistan. Roughly $10bn in Afghan central bank reserves, however, remain frozen at banks abroad, notably with the US Federal Reserve.

Yusuf called for world powers to engage with the Taliban rather than to freeze ties with the government led by the armed group, which waged a bloody 20-year battle against occupying US and NATO forces that killed tens of thousands of Afghan civilians and security forces.

“By engaging, you essentially are saying we are constructively going to try and look at how to help Afghanistan for the sake of the average Afghan,” said Yusuf.

Asked if there were human rights concerns under a Taliban government, the Pakistani national security adviser said international powers could only exercise leverage on those issues if it engaged with the country. 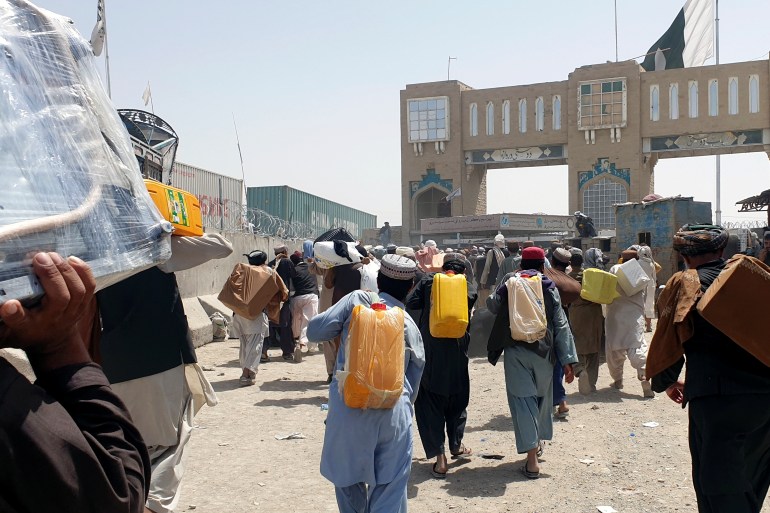 People walk with their belongings to cross into Pakistan at the Friendship Gate crossing point, in the Pakistan-Afghanistan border town of Chaman, Pakistan September 6, 2021 [File: Abdul Khaliq Achakzai/Reuters]

“If the Taliban have signalled clearly, which they have, that they want to remain engaged with the world … and if they have said clearly that engagement would bring legitimacy and assistance, it’s not Pakistan that would provide that,” he said.

“We can’t provide that legitimacy, that’s the West. And that’s the leverage. But if you engage constructively then that conversation can happen.”

He also said engagement with the government would help to address global security concerns. The Taliban has in the past, and in the historic accord with the United States in February 2020, stated that Afghan soil will not be allowed to be used against foreign countries.

Yusuf on Wednesday said Pakistan had held talks with Taliban leaders regarding security concerns, specifically to do with the Pakistani Taliban armed group that has many fighters based in eastern Afghanistan.

“We made it absolutely clear that we cannot accept any terrorism from Afghan soil, and frankly the very clear response is that there is absolutely no interest in letting that happen, and so now the goal again is border management, making sure that these [fighters] are not allowed to operate in the way that they do,” he said.

Pakistan has seen an increase in attacks on security forces in the northwest of the country, in districts near the Afghan border, since the Taliban took power last month.

Yusuf also warned that immediate humanitarian aid would not address the long-term sustainability of the Afghan economy, and that world powers needed to do more to ensure the country – heavily dependent on foreign aid for decades – does not descend into an economic crisis.

“Humanitarian assistance is just a stop-gap arrangement to ensure that there is no immediate humanitarian crisis. That does not equate to governance, institutional and economic support,” he said. 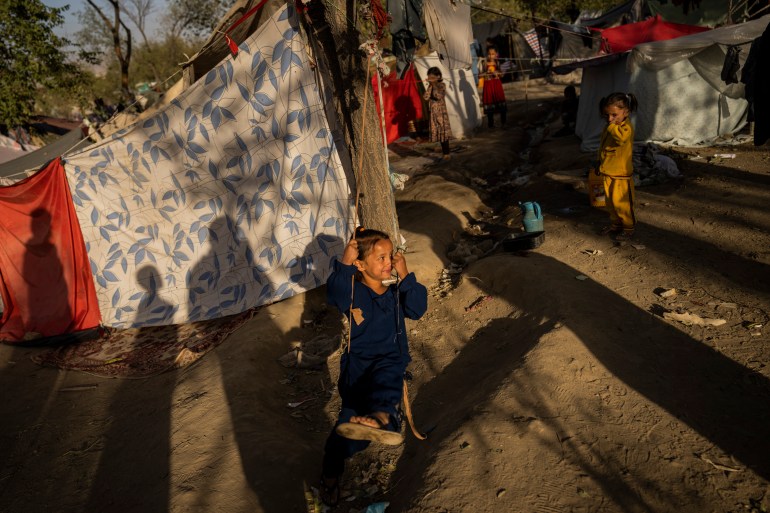 “Afghanistan is a war-hit country and it needs the international community’s assistance in different sectors, especially education, health and development,” Muttaqi told reporters in Kabul.

Pakistani Prime Minister Imran Khan is due to fly to the Tajikistan capital Dushanbe on Thursday to attend a summit of the Shanghai Cooperation Organisation (SCO) at which the situation in Afghanistan is expected to figure prominently.

Yusuf said Khan would be urging world powers at the SCO, which includes Russia, China, India and several Central Asian states, to “engage” with the Taliban’s government in Afghanistan.