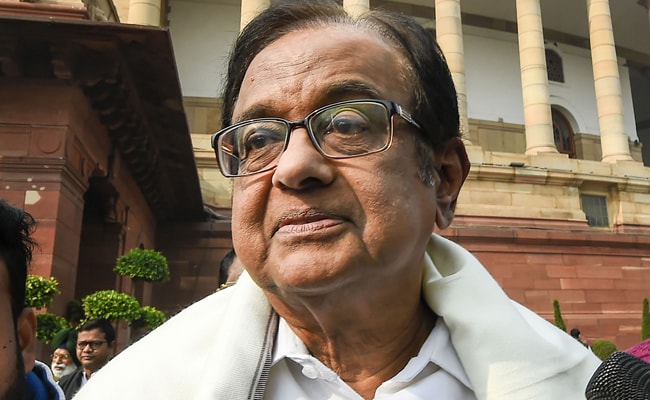 A Delhi court Wednesday issued summons to former Union minister P Chidambaram and his son Karti in the INX Media money-laundering case on taking cognisance of the charge sheet filed by the Enforcement Directorate (ED) against them.

Special Judge MK Nagpal issued summons against the senior Congress leader, his son and others directing them to appear before court on April 7.

The court said there was sufficient material to proceed against the Chidambarams, Mr Karti's chartered accountant SS Bhaslararaman, former CEO of INX Pratim Mukerjea and six firms including INX Media and INX News.

After the court's order, P Chidambaram told PTI, "Summoning the accused is a routine step."

The charge sheet was filed under section 3 (money laundering) read with section 70 (offences by companies), which is punishable under section 4 (punishment) of the Prevention of Money Laundering Act (PMLA).

"I find sufficient material and grounds for proceeding further in the matter against all the 10 accused persons named in the complaint, out of which six accused are companies, for commission of offence under section 3 read with section 70 of the PMLA, which is punishable under section 4 of the Act," the judge said in his order.

The charge sheet alleged that the first installment of illegal gratification of Rs 3,08,62,044 in furtherance of criminal conspiracy, was paid by INX Media to M/s Advantage Strategic Consulting Pvt Ltd (ASCPL) and two other shell companies.

It said these firms, Kriya FMCG Distributors Pvt Ltd (Kriya) and CBN Placement and Management Centre (CBNPMC), were beneficially owned or controlled by Karti, and the amount was paid during 2007-08 through SpanFibre and Satyam Fibre (India) Pvt Ltd (Satyam Fibre).

It further alleged that the amount was found to have been paid through 12 fake debit notes/ invoices raised by ASCPL, Kriya and CBNPMC on Span Fibre and Satyam Fibre at the instance of Mukerjea and it was shown to have been paid as a commission for sale of Polyester Staple Fibre (PSF) by Span Fibre and Satyam Fibre to different companies but no such transactions actually took place.

"These fake invoices/ debit notes are also alleged to have been created as a part of the scheme to camouflage/ layer the illegal gratification as genuine business transactions.

"The bank details of the three companies receiving payments against these debit notes/invoices confirmed that the amount of these companies were substantially utilized for the benefit of Karti P Chidambaram and other persons related to him," the court noted in its order.

The court said as per the charge sheet, Karti also subsequently distanced himself from the affairs of ASCPL when certain media reports appeared about the alleged role of his father in granting FIPB approvals.

ED has alleged that besides the original illegal gratification amount of Rs 3.08 crore received by ASCPL and its associate companies, Rs 22.20 crore, Rs 18.64 crore and Rs 18.49 crore were also alleged to be the tainted money having been earned by way of multiplication of original proceeds of crime on account of profits derived on investments of the original amount.

The court further said the probe agency had alleged in the charge sheet that about Rs 65.88 crore was of the properties involved in money laundering and the money was laundered by the accused persons in the form of various movable and immovable assets in India and some foreign countries.

ED further alleged, "It has further been revealed during investigation that another subsidiary company of Advantage Strategic Consulting Singapore Pvt Ltd (ASCSPL), namely Advantage Estrategia Esportiva SLU, Barcelona, Spain and beneficially owned by accused Karti, P Chidambram, was also involved in laundering of the tainted money as proceeds of crime were transferred in this company from ASCSPL and were invested in properties in and outside India."

The charge sheet said further investigation to identify the remaining tainted amount and the assets of the Chidambarams allegedly acquired through tainted money in India and was pending.

Chidambaram was arrested by the Central Bureau of Investigation (CBI) in the INX Media corruption case on August 21, 2019.

On October 16, 2019, the ED arrested him in a related money-laundering case.

Six days later, on October 22, the top court granted bail to Chidambaram in the case lodged by the CBI.

The CBI had registered its case on May 15, 2017, alleging irregularities in a Foreign Investment Promotion Board (FIPB) clearance granted to the INX Media group for receiving overseas funds of Rs 305 crore in 2007, during Chidambaram's tenure as finance minister.

Subsequently, the ED had lodged the money-laundering case.