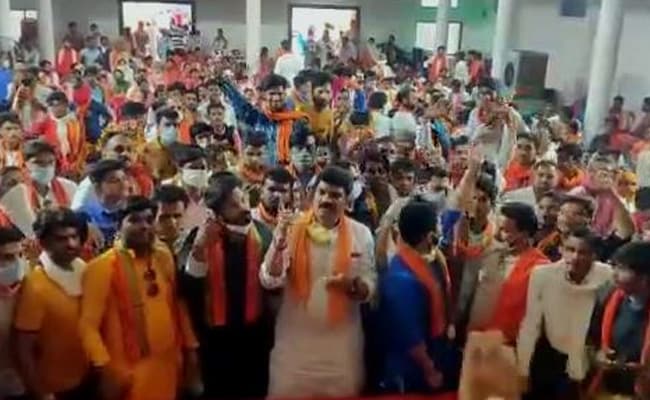 Gaurav Singh Rajput had quit Congress to join the BJP.

BJP leader Govind Singh Rajput - a minister in the Madhya Pradesh cabinet - has courted controversy after he was caught on camera violating social distancing norms amid spike in the corovirus cases in the state.

In visuals shared on social media, the 48-year-old BJP leader was seen addressing a large number of followers at a hall in Rahatgarh town, about 130 km from state capital Bhopal. Most men sitting in the audience were not wearing masks.

A clip shows the BJP leader - surrounded by a huge crowd - shouting slogans to the camera, violating social distancing norms despite repeated appeals by Prime Minister Narendra Modi as the country fights the pandemic.

The minister, a Jyotiraditya Scindia supporter, had also switched to the BJP in March after Mr Scindia ended his decades-long association with the Congress.

Mr Scindia's exit had led to the fall of the Kamal Nath government as several Congress MLAs, including Govind Singh Rajput, resigned from the state assembly and switched sides.

On Saturday, Mr Rajput had gone to meet his followers in the Surkhi constituency where by-polls are due after his resignation. He is the BJP's most likely candidate from the constituency.

He is not the only BJP leader accused of violating social distancing norms. On Saturday, a case was registered against the BJP's Madhya Pradesh vice president and former MLA Sudarshan Gupta after he participated in an event to distribute ration on the occasion of Union Minister Narendra Singh Tomar's birthday in Indore, a coronavirus hotspot.

Huge crowds participated in the event where chaos unfolded as huge crowds gathered.

During the celebrations, ration packets were distributed among crowds without following social distancing norms. A case has been registered against Mr Gupta and his aides for violation of prohibitory orders.

The coronavirus cases in Madhya Pradesh has crossed the 10,000-mark and 447 patients have died so far. Across India, more than three lakh have been affected by the pandemic.