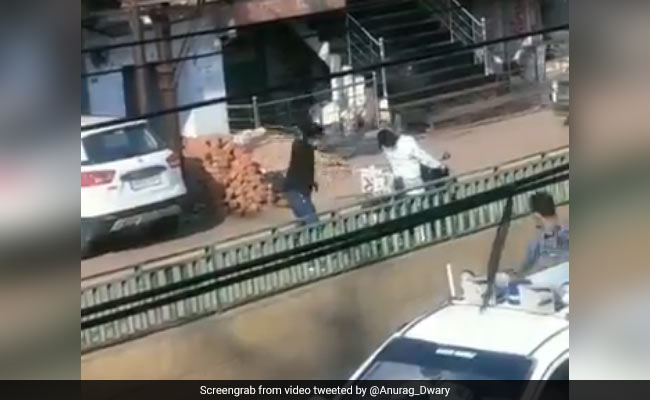 In one of the clips, the cop, dressed in plain clothes, was allegedly seen hitting a man with a stick.

A policeman has been caught on camera hitting people for violating containment zone guidelines in Chhattisgarh's capital Raipur, prompting authorities to order an inquiry into the incident.

Some video clips of the incident went viral on social media following which Chief Minister Bhupesh Baghel termed the act as "inhuman", and said the police officer concerned has been sent on leave and a departmental probe has been ordered.

The incident took place on Sunday morning in Birgaon area under Urla police station limits, which has been declared as a containment zone after some COVID-19 cases were reported from there in last few days, a police official said.

In one of the video clips, Urla Station House Officer (SHO) Nitin Upadhyay, dressed in plain clothes, was purportedly seen hitting a boy repeatedly with a stick.

The boy was seen along with a woman, said to be his mother. In other clips shot by locals, Mr Upadhyay was seen beating some motorcyclists in the area.

We have taken note of the video which has gone viral that shows a TI (Thana in-charge) thrashing people with sticks. A departmental inquiry has been ordered against the officer concerned," Raipur Senior Superintendent of Police Arif Sheikh told PTI.

A separate inquiry, to be led by Raipur additional superintendent of police (rural), has also been ordered, the official said.

Mr Sheikh said on Sunday, a man, suspected to be infected with coronavirus, died in Birgaon area which is already declared a containment zone after six to seven COVID-19 cases were reported from there.

In view of the death, officials had requested people in the area to stay indoors, he said.

But despite repeated requests, when people did not adhere to the containment zone guidelines, the SHO rushed there to prevent movement of people, Mr Sheikh said.

However, excesses committed by him are not acceptable and suitable action will be taken after the probe, he added. Chief Minister Bhupesh Baghel also took note of the incident and said it was unacceptable.

"This is inhuman and not acceptable. Departmental enquiry has been constituted and he (the SHO) has been sent on leave," Mr aghel tweeted.