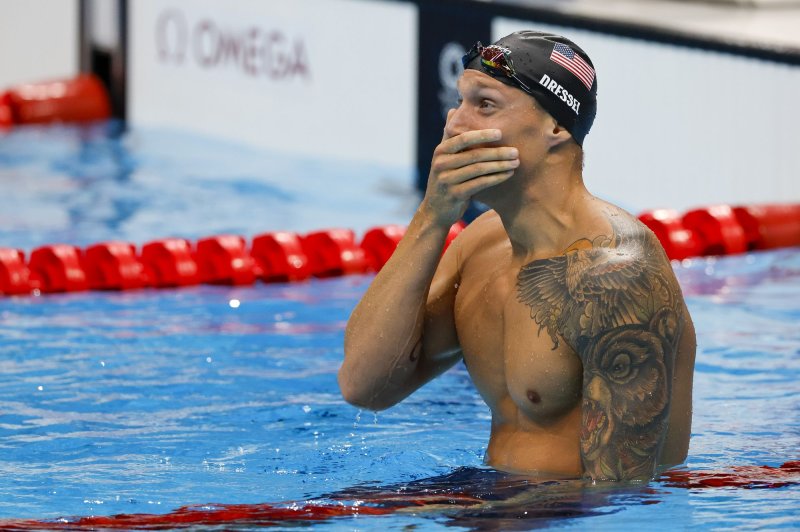 Dressel exploded at the start to lead the entirety of the race, finishing with a time of 47.02 seconds and fending off a desperate final stretch by Australia's Kyle Chalmers who finished just 0.06 seconds behind to finish with silver as Kliment Kolesnikov of Russia finished with the bronze.

In a tearful post-race interview Dressel thanked his family, who were not able to attend the games in Tokyo amid the COVID-19 pandemic via video conference.

"It's a really tough year, it's really hard, so to have the results show up ... it really came together, so I'm happy," he told a reporter after the race.

The 21-year-old Finke, participating in his first Olympic Games posted a time of 7 minutes and 41.87 seconds, narrowly overtaking Italy's Gregorio Paltrinieri and Mykhailo Romanchuk of Ukraine.

Finke was in fifth place for much of the race, biding his time before exploding off the final turn to jump to the head of the pack in the final 50 meters.

"I just wanted to get my hand on the wall, I'm just so happy I was able to switch into another gear," he told a reporter after the race. "Our coaches have been training us on that so often and I'm just so grateful for them and training me to be able to do it."

American Nic Fink failed to medal in the men's 200-meter breaststroke, placing fifth, as Izaac Stubblety-Cook of Australia took the gold with an Olympic record time of 2 minutes and 6.38 seconds, Arno Kamminga of the Netherlands earned silver and Matti Mattsson of Finland took home the bronze.

U.S. women's swimmers Regan Smith and Hali Flickinger took home silver and bronze respectively in the women's 200-meter butterfly as Zhang Yufffei of China won gold with a time of 2 minutes and 3.86 seconds, the fastest time in the event in 12 years.

Severe storms to slice through unseasonable warmth in Upper Midwest