North Korea tested missiles over the weekend: US, South Korea

US, which is reviewing its North Korea policy, downplays tests with President Joe Biden saying ‘nothing has changed’.

North Korea fired at least one missile off its west coast over the weekend in its first publicly known weapons test since Joe Biden took office as president in January, officials in the United States said on Tuesday, as the administration said it remained open to talks with Pyongyang.

Two senior officials of the Biden administration told reporters in a briefing call that the North Korean activity involved weapons systems that were not covered by UN Security Council testing bans.

Two other US officials, who also spoke on condition of anonymity, told the Reuters news agency that North Korea had fired two short-range missiles but declined to elaborate.

During a visit to Ohio, Biden told reporters, referring to the North Korean government: “We have learned that nothing much has changed.”

South Korea’s Joint Chiefs of Staff said on Wednesday that North Korea had fired two cruise missiles off its west coast on Sunday, adding that it had been monitoring the test in real time.

“What they fired were cruise missiles, not ballistic missiles, and they were detected by our assets,” a source in the defence ministry was quoted as saying by Yonhap news agency.

The tests are the first since July last year when Pyongyang fired what were also thought to be cruise missile, and took place as US Secretary of State Antony Blinken wrapped up a visit to northeast Asia calling on China to use its influence to convince Pyongyang to give up its nuclear programme.

Biden’s predecessor Donald Trump boasted of his ability to work with North Korean leader Kim Jong Un and the two men met three times in 2018 and 2019. Trump’s summitry failed to achieve a breakthrough, however, as talks collapsed over US calls for Pyongyang to give up its nuclear weapons and North Korea’s demands for an end to sanctions.

Officials in the US, which is reviewing North Korean policy and South Korea appeared to downplay the latest tests, which have not yet been acknowledged by the North. Offers to resume talks have so far been rebuffed with Kim Jo Yong, North Korean leader Kim Jong Un’s powerful sister, last week warning the US against “causing a stink” if it wanted peace.

Ankit Panda, a senior fellow at the Carnegie Endowment for International Peace, said if the test involved a cruise missile, it was probably a KN-19 (also known as the Kumsong-3).

“North Korean cruise missile tests are not a violation of UNSCR 1718, but we should probably care more than we do about their steady progress in this area – especially with Kim Jong Un’s 8th Party Congress talk of a new “intermediate-range” cruise missile,” Panda wrote on Twitter.

The North carried out a flurry of missile tests in the first part of last year, as the rest of the world grappled with the COVID-19 pandemic. Analysts believe the same type of missile was tested in April and July of last year, NK News website said.

Yonhap also reported “signs” that Pyongyang was deploying multiple rocket launchers and other weapons on the western border islet of Changrin.

“Our military has been closely tracking and monitoring North Korea’s military moves, while the South Korean and the US intelligence authorities have been maintaining a close cooperation,” Joint Chief of Staffs spokesperson Colonel Kim Jun-rak told a regular briefing, according to the South Korean news agency.

“Leaving all possibilities open, we maintain a readiness posture,” he added. 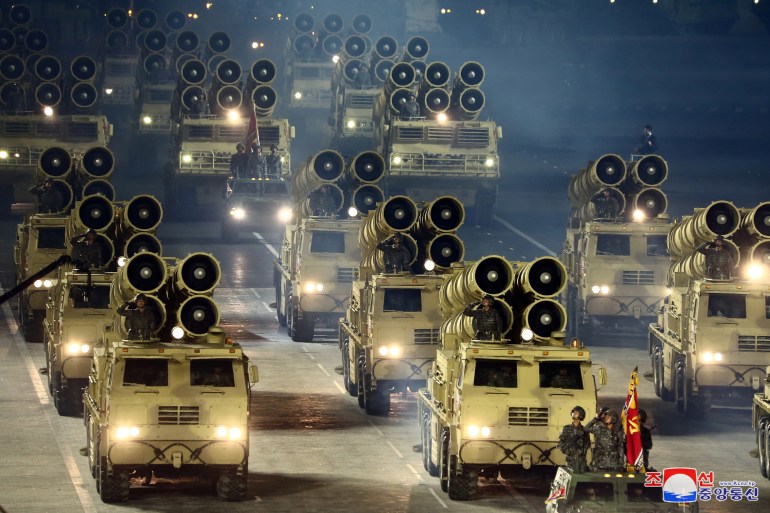 Military vehicles are seen during a parade to mark the 75th anniversary of the founding of the ruling Workers’ Party of Korea, in this image released by North Korea’s Central News Agency on October 10 last year [KCNA via Reuters]A military official said that the signs were first detected some months ago and noted a large number of troops and “many kinds” of weapons, including coastal guns had been stationed there.

Changrin lies just north of the Northern Limit Line (NLL), the de facto inter-Korean maritime border, and around 45 kilometres (28 miles) away from the island of Yeonpyeong in South Korea.

Last month, a report from independent UN monitors said North Korea maintained and developed its nuclear and ballistic missile programmes throughout 2020 in violation of international sanctions.

The country displayed new short-range, medium-range, submarine-launched and intercontinental ballistic missile systems at a series of military parades during the year. Last month, it unveiled what it said was ‘the world’s most powerful weapon‘ at a military parade in Pyongyang to mark the 8th ruling party congress.