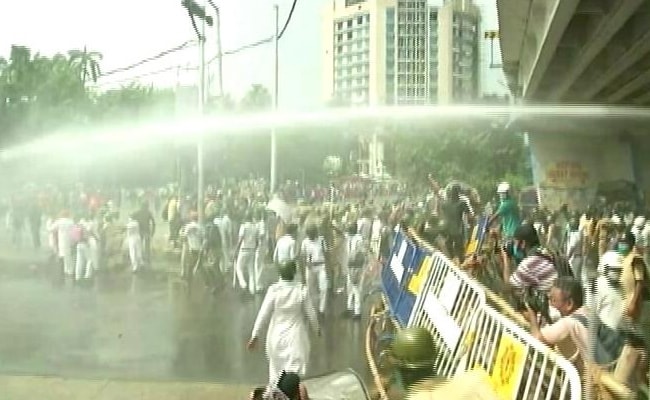 West Bengal Chief Secretary Alapan Bandyopadhyay on Thursday refuted rumours that water cannons that were used on protestors Howrah by West Bengal police personnel had some chemicals in it.

"No chemical was used in cannon water, it is wrong information. The intent globally to use coloured water is to identify a person post dispersal for further necessary action as per the law if required," Mr Bandyopadhyay told ANI.

Addressing a press meet in Kolkata, the chief secretary said that a total of 89 persons were detained in the Kolkata Police area and 24 in Howrah Police area and some police personnel have sustained injuries during the BJP's "Nabbano Cholo" agitation today.

"Evidence of violent incidents have been found, firearms recovered, policemen were also attacked. 89 persons were detained in Kolkata Police area and 24 detained in Howrah Police area. Some police personnel have sustained injuries," Mr Bandyopadhyay said at the media briefing.

"The applicant last evening had mentioned several rallies and said, each rally will have around 25,000 youth. If each rally had to be allowed then that would have been a travesty as per the lockdown norms," the Chief Secretary said.

The BJP launched a state-wide protest march towards the state secretariat "Nabanna" against the alleged killing of its party workers, and goon politics in West Bengal.

In a press conference in the national capital Union Minister Ravi Shankar Prasad has said, "I have been told that the water (water cannons) had some chemical in it which is why people have been vomiting."

Mr Prasad also said, "BJP strongly condemns barbaric treatment by Bengal Police of senior party leaders. We would like very politely say to Mamata Ji and TMC, by using Police and lathis you won't succeed in stopping BJP's expansion. Around 1500 BJP workers have been injured."

In Howrah, BJP workers tried to break the police barricade, which was placed to stop the protesters' movement and set ablaze tyres. Police also used tear gas to control the situation.

BJP workers who gathered outside the party's state headquarter in Kolkata in large numbers for the "Nabanna Chalo" agitation, raised anti-government slogans.

On October 2, after his meeting with Home Minister Amit Shah, and National party president JP Nadda in Delhi, West Bengal BJP president Dilip Ghosh had told ANI that the state unit of the party will organise a huge protest on October 8 regarding the corrupt and goon politics of the West Bengal government.