At least two people have been killed and hundreds arrested in Niger’s post-election violence.

Ousmane disputed the result and claimed he narrowly won with 50.3 percent of the vote.

“The toll is two dead,” Interior Minister Alkache Alhada told reporters on Thursday, adding that 468 arrests had been made “including certain politicians” whom he did not identify.

One of the two deaths occurred as a result of an epileptic fit during a protest, Alhada said, adding that the other, who was shot dead, was the bodyguard of politician Seini Oumarou, an unsuccessful candidate in the first round of voting on December 27 who had urged supporters to vote for Bazoum in the runoff.

There was also “destruction of infrastructure, of public and private property”. 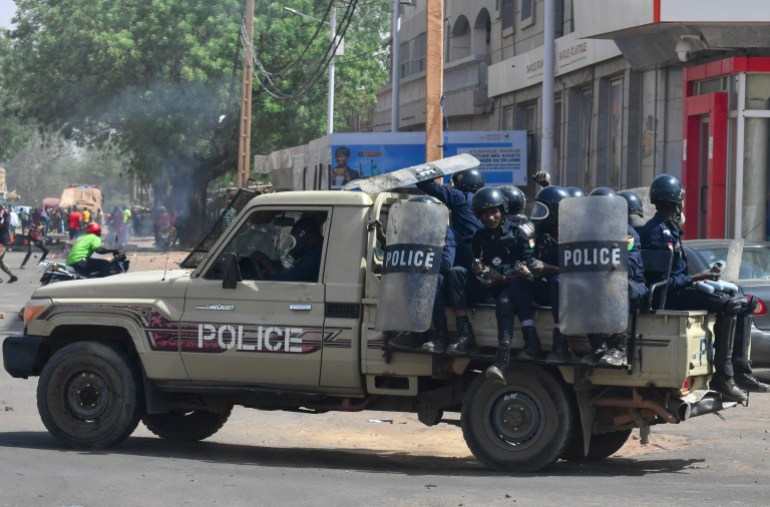 Riot police officers patrol on a pickup truck during clashes with demonstrators [Issouf Sanogo/AFP]Alhada accused a prominent opposition figure, Hama Amadou, of being “the main person responsible” for the unrest.

“[Amadou] is being sought and as usual he is on the run, but we will find him,” Alhada said.

Amadou was banned from contesting the election because of a conviction for baby trafficking – a charge he says was politically motivated – and threw his support behind Ousmane.

The elections have been trumpeted as a democratic watershed for the Sahel state – the world’s poorest nation, according to the UN’s benchmark of human development, and a country wrestling with two armed rebellions.

President Mahamadou Issoufou is voluntarily stepping down after two five-year terms, paving the way for the first elected transition since independence from France in 1960.

Police clashed with demonstrators in the capital, Niamey, on Tuesday and Wednesday, while in Dosso, 100km (60 miles) south of the city, the offices of a pro-government party were damaged by fire.