Netflix releases pictures of Chadwick Boseman in his final role

Netflix has released pictures of Chadwick Boseman in what is thought to have been his final acting role before his death.

Boseman, who died in August after a four-year struggle with colon cancer, will posthumously star alongside Oscar winner Viola Davis in Ma Rainey's Black Bottom.

The film, set in 1920s Chicago, tells the story of "Mother of the Blues" Ma Rainey, who is fighting with her white manager and producer for control of her music. 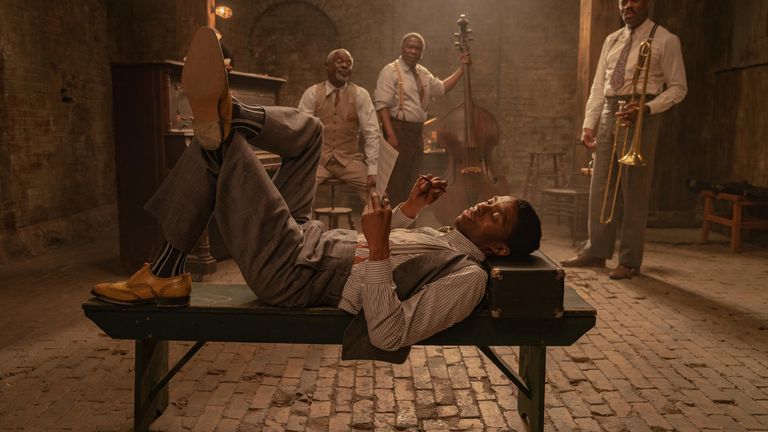 Boseman, who is best-known for his role as T'Challa in Marvel's Black Panther, will play a trumpeter in Ma Rainey's session band called Levee.

Levee is "determined to stake his claim on the music industry" and "spurs his fellow musicians into an eruption of stories revealing truths that will forever change the course of their lives".

The film wrapped in August 2019, just six weeks after production began, meaning Boseman would have been aware of his cancer diagnosis.

After Boseman died, his co-star Viola Davis tweeted: "Chadwick... no words to express my devastation of losing you.

"Your talent, your spirit, your heart, your authenticity... It was an honour working beside you, getting to know you.

"Rest well prince... May flights of angels sing thee to thy heavenly rest. I love you!" Boseman's death shocked the entertainment world, with his cancer diagnosis having been all but hidden until then.

He played black icons Jackie Robinson and James Brown early in his career, before finding fame as the regal Black Panther in the Marvel cinematic universe.

It was also the first superhero film to get an Oscar nomination for best picture.

Ma Rainey's Black Bottom is based on a play of the same name by August Wilson, and was produced by Denzel Washington.

It is expected to be released by Netflix on 18 December.