The Navajo Nation continues its vaccine drive with over 120,000 doses administered on Friday, moving closer to becoming the first area in the United States to give the first jab to its entire population.

The Navajo Nation’s vaccine campaign, which began in December, set a goal of 100,000 initial doses administered by the end of February, which it surpassed on Thursday this week. Health officials then set a new goal of 120,000 doses, which they surpassed today.

An area of roughly 70,000sq km (about 27,000sq miles) with a population of 170,000, the Navajo Nation is a largely rural region that essentially serves as a reservation for the Navajo, or Dine, people. It was hit hard during the beginning months of the COVID-19 outbreak, having a per capita infection rate higher than other hot spots like New York City.

Authorities need to administer slightly less than 50,000 more doses to achieve a level of protection for all residents. According to Navajo Nation statistics, 39,934 have already received both doses.

Dr Loretta Christensen, chief medical officer of the Navajo Area Indian Health Services (NAIHS), told Al Jazeera during a Thursday press conference that NAIHS held a meeting to discuss “getting our population vaccinated in achieving what we call ‘community immunity,’ and what our next steps would be”.

Christensen said health officials will work with local organisations to “heat map” the Navajo Nation for vaccines, searching for rural areas or other communities and groups that have limited access to health centres in order to deliver doses. 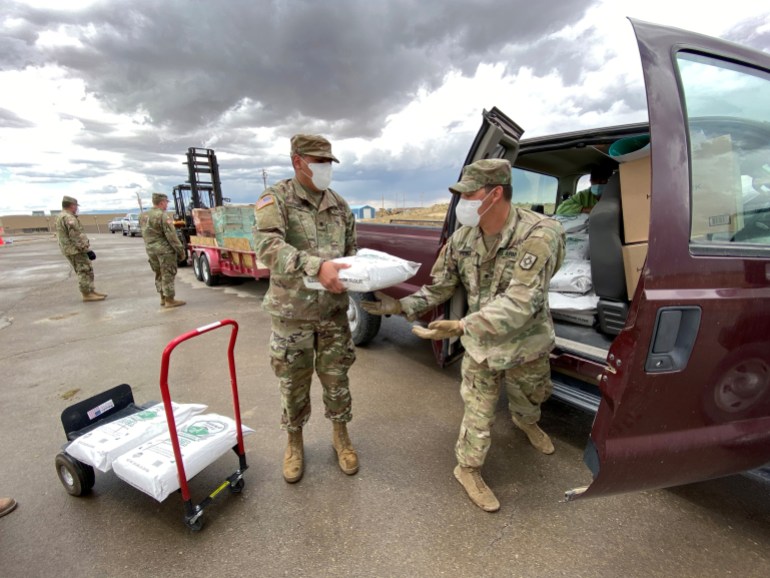 Members of the New Mexico Army National Guard put bags of flour into a truck as they assist with food distribution throughout the Navajo reservation amid an outbreak of COVID-19 in Standing Rock, New Mexico, in May 2020 [Donovan Quintero/Reuters]A registry has also been created to help those who are not close to a site that administers vaccines find a place to go, Christensen explained.

“We’ve also reached out to our Navajo population that isn’t currently living on the reservation that either goes to school or work off reservation. And we highly encourage them to do come back if they need to.”

The Navajo Nation spreads across three states: New Mexico, Arizona and Utah. It also borders Colorado, where many residents go to buy food and supplies. The tribal area shares its longest borders with New Mexico and Arizona, two states it is far outpacing in delivering vaccines.

New Mexico has delivered 540,184 initial doses to its population of over two million, according to state statistics.

Arizona, which was named an “anti-vaccine hot spot” by an academic study in 2018, has delivered at least one dose to 15.8 percent of its over 7.2 million population, or 1,603,558 as of Friday morning, the state reported.

When asked if NAIHS has plans for the possibility of achieving “community immunity” before neighbouring states, Christensen said they are looking ahead but could not provide specifics.

“Our goal of course is to keep everybody safe. And since our population of Navajo people certainly interact in Utah, Colorado, Arizona and New Mexico, it is vitally important to us that the populations that we work amongst and live amongst – that we’re all safe. So that would be our ultimate goal”, she concluded.

The Navajo Nation is the largest population centre for Indigenous people in the US, but the broader Indian Health Service (IHS), which oversees the vaccine campaign on tribal lands across the continental US, is also seeing vaccination rates higher than most states. 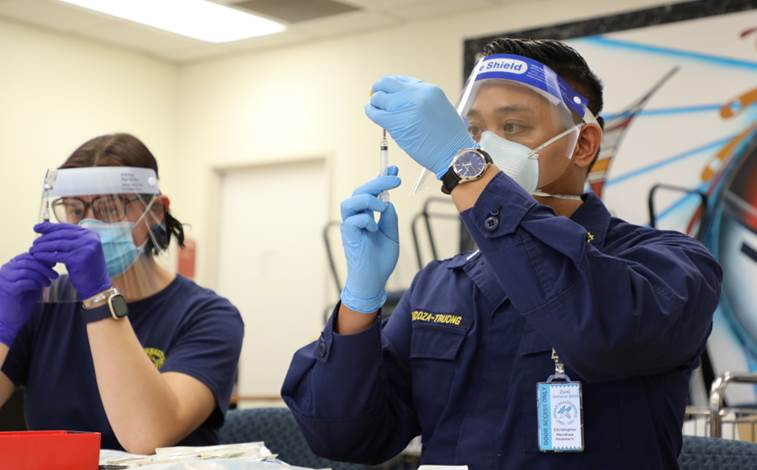 Lieutenant Sara Mantick, pharmacist, and Lieutenant Christopher Mendoza-Troung, acting chief pharmacist, begin drawing COVID-19 vaccines at the Zuni Comprehensive Health Center in New Mexico on December 16, 2020 [Courtesy of IHS]The US had over five million people who identified as Indigenous either solely or in combination with other ethnic groups in 2010, according to US Census data.

Joshua Barnett, an IHS spokesperson, said the agency set “a goal of having 400,000 doses of COVID-19 vaccines administered … by the end of the month. I can report that we reached that goal on February 18, ahead of schedule.”

Barnett credited the “tireless efforts of healthcare workers across” the IHS system.