"Natural To Discuss Politics": Lalu Yadav Meets Mulayam Singh Ahead Of UP Polls 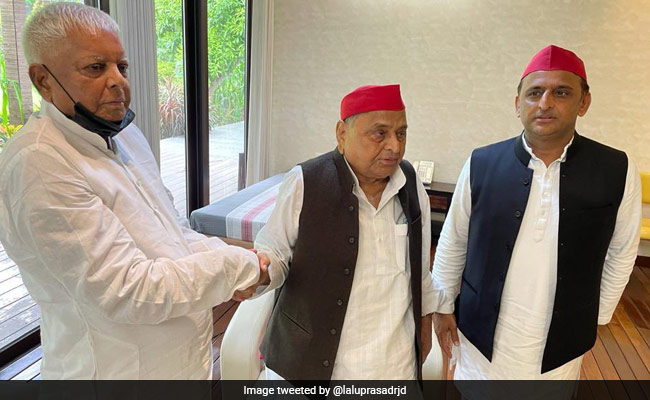 Photographs of the meeting were shared from the Twitter handles of both Akhilesh Yadav and Lalu Yadav.

In a tweet in Hindi, Lalu Yadav said, "Met the country's senior most socialist friend Shri Mulayam Singhji and enquired about his wellbeing. We have common concerns and fight about farmers, inequality, the poor and the unemployed."

While the three leaders who met have not spoken about the agenda of the meeting, the timing is being seen as significant given that the all-important Uttar Pradesh assembly polls are due in a few months.

"Mulayam Singh-ji had been unwell. Lalu Yadav visited to enquire about his health. It is natural that when two senior politicians of the country meet, politics will be discussed," Samajwadi Party leader Ram Gopal Yadav told NDTV.

Lalu Yadav was granted bail in cases linked to the Bihar fodder scam by the Jharkhand High Court earlier this year. The cases had kept him in prison for three years.

Akhilesh Yadav has repeatedly said that he does not want an alliance with bigger parties in Uttar Pradesh, like Mayawati's Bahujan Samaj Party (BSP) or the Congress. Sources say the Congress though, does want some kind of an understanding with the Samajwadi Party. Their last alliance, for the 2017 assembly polls, ended in disaster with the BJP sweeping that election.

Yogi rakes up anti-CAA protest in Moradabad, accuses Opposition of trying to burn UP

Decision To Get Best Operator At Best Price Not Unreasonable: Supreme Court