Imagine having to parallel park a 15-passenger van in a narrow parking spot surrounded by two-storey boulders. Then imagine doing it on an asteroid hurtling through outer space at speeds of more than 62,700 miles per hour (101,000 km/h).

On Tuesday, a mission led by US space agency NASA and a team of researchers from the University of Arizona in the United States will do just that, sending commands to a small spacecraft more than 200 million miles (321.9 million kilometres) away, and guiding OSIRIS-REx to vacuum up bits of an asteroid named Bennu and bring them back to Earth. Inside those samples could be clues about the origins of life itself.

Four years ago, the US space agency deployed OSIRIS-REx on a mission to explore Bennu, a primordial piece of space debris that can trace its origins back to the formation of the solar system. Now, OSIRIS-REx is poised to land on Bennu’s surface, making for NASA’s first-ever asteroid sample return mission, and the biggest delivery of extraterrestrial material since the Apollo era of the 1960s and ‘70s.

It’s a technological feat nearly two decades in the making, and its main goal is to collect a pristine, unaltered sample from the asteroid’s surface. To do so, the spacecraft will utilise a special robotic arm with a collection head on the end. On Tuesday afternoon, the plucky little craft is expected to descend to Bennu’s surface, extend its arm and blast the asteroid with enough nitrogen gas to push surface material up into the collection head.

Studying Bennu is going to help us better understand the role asteroids might play in delivering these life-forming compounds to Earth.

It will take OSIRIS-REx four hours to traverse the 0.6 miles (one kilometre) distance down to the surface, moving approximately 3.9 inches per second (10 centimetres per second). Once it gets close to the surface, the craft will extend its more than nine-foot-long (three-metre-long) robotic arm, called TAGSAM (or Touch-and-go Sample Acquisition Mechanism), which is topped with a sample collection device resembling a large shower head. It’s designed to blow a small burst of nitrogen gas onto Bennu’s surface to stir up some dust and rocks.

This material will then be collected in a ring around the head, which can store just about four pounds (1.8kg) of material. OSIRIS-REx’s goal is to collect at least 0.13 pounds (60g) of surface material from Bennu, which may not sound like a lot, but is an incredibly tricky manoeuvre to pull off that requires extreme precision – especially on a rocky, uneven surface like Bennu’s, where boulders can be the size of football pitches. 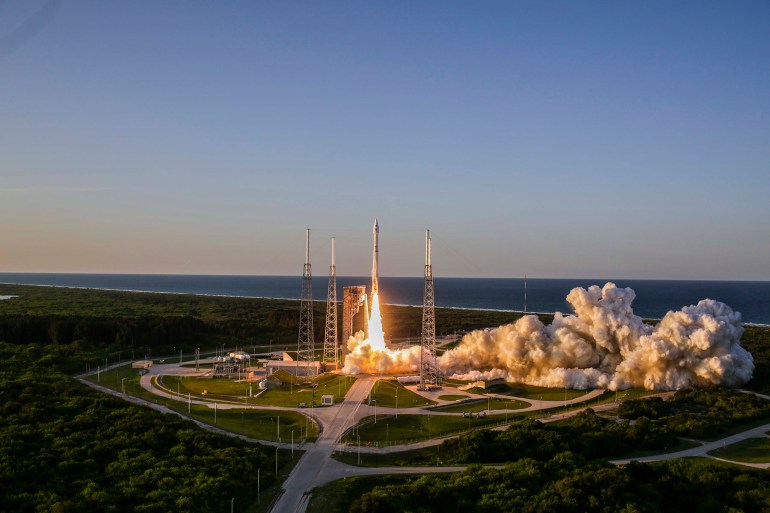 OSIRIS-REx was launched by NASA in September 2016 to travel to Bennu. One shot

OSIRIS-REx arrived at Bennu in 2018 and meticulously mapped the asteroid’s surface across a two-year period to determine the best place to collect the sample. The result? A 66-foot-wide (20-metre-wide) crater near Bennu’s north pole that the team calls Nightingale. It was selected primarily because the crater appears to be young, which means that the exposed rock is likely to consist of pristine samples from when the asteroid was formed billions of years ago.

OSIRIS-REx’s collection head was designed to work best on a flat, sandy surface, which Bennu does not have. So scientists will have to aim carefully, as it could spell trouble for the mission if the arm touches down on top of rocks that are more than a few centimetres in diameter — severely limiting how much material that could be collected. Also, TAGSAM only has three nitrogen bottles, so the team can’t afford to waste them.

The team basically has a single shot to collect as much material as they can from Nightingale crater. That’s because once the nitrogen gas is fired, the surface material is disrupted, flying – hopefully – up into the collection head. It’s an opportunity literally years in the making.

OSIRIS-REx has two key tools that will help the spacecraft determine if it’s safe to land and start the collection process on Tuesday.

“There are two key products we’ve built, one of which is a detailed map of the asteroid’s surface, complete with potential hazards for the spacecraft,” Dante Lauretta, the mission’s principal investigator from the University of Arizona, told Al Jazeera. “And the other is a catalogue of features in the crater.”

If a sample is collected, it will be weighed and the team will determine if another attempt is necessary. But if all goes as planned and there is enough material in the OSIRIS-REx’s collection head, it will be stowed in a special canister that will be jettisoned when the spacecraft swings by Earth in 2023.

If this kind of chemistry is happening in the early solar system, it probably happened in other solar systems as well. It helps us assess the likelihood of the origin of life occurring throughout the galaxy and, ultimately, throughout the universe.

But if OSIRIS-REx’s onboard hazard map determines it isn’t safe to land in Nightingale, the spacecraft will abort the manoeuvre and the team will have to reassess its plans – and its maps. Both the onboard hazard map and the catalogue of features in the crater “change as a result of us firing the TAGSAM at the surface, so we will need to rebuild our maps,” Lauretta explained.

If the team fails to collect at least 0.13 pounds of material from Bennu on Tuesday, there is a second chance as early as December, but it might require relocating to a different crater. That manoeuvre would be a repeat of Tuesday’s plans, at another site near Bennu’s equator, called Osprey, which is equally enticing. Each dive is incredibly risky, so the team is hoping it will collect enough samples on the first try. 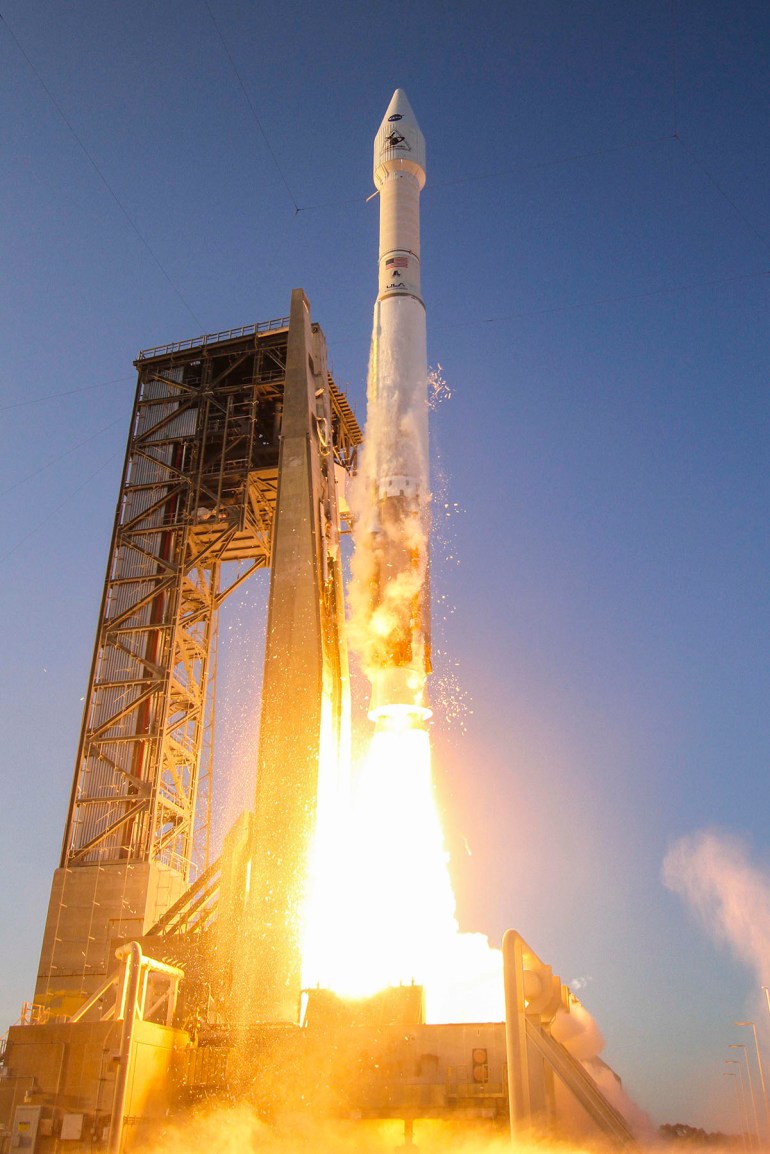 The samples OSIRIS-REx could send back to Earth could hold the keys to understanding how life formed here and elsewhere. Pay dirt

Asteroid researchers have been waiting for years to get their hands on dirt from Bennu. These types of space rocks are incredibly interesting to scientists because asteroids contain pieces of the earliest materials that formed our solar system, and studying them might allow scientists to answer fundamental questions about the origins of the solar system. That’s because moons and planets have changed over time, but most asteroids have not.

“Asteroids are like time capsules floating in space that can provide a fossil record of the birth of our solar system,” Lori Glaze, NASA’s director of Planetary Science, told Al Jazeera. “They can provide valuable information about how planets, like our own, came to be.”

Bennu was selected as a target because scientists believe it is a small fragment of what was once a much larger space rock that broke off during a collision between two asteroids early on in our solar system’s history.

The rubble pile seen today is more than 4.5 billion years old, a perfectly preserved cosmic time capsule that could contain clues about the origin of life, Lauretta said.

“Bennu turned out to be exactly the kind of target we hoped it would be,” Lauretta said.

Thanks to data collected from orbit, the team has determined two key discoveries: first, that between 5 and 10 percent of Bennu’s mass is water, and second, that its surface is littered with carbon-rich molecules. This means that any samples returned to Earth could help scientists better understand what role asteroids played in bringing water to our planet, and seeding it with the prebiotic material that provided the building blocks for life.

Asteroids are like time capsules floating in space that can provide a fossil record of the birth of our solar system. They can provide valuable information about how planets, like our own, came to be.

Earlier this month, researchers on the OSIRIS-REx team made an exciting discovery, one that confirmed something the team suspected all along: Bennu is rich in organic material. The results were published in a series of papers in the journal, Science.

Studying that material could also help scientists discover whether life exists elsewhere in the solar system, as well.

“If this kind of chemistry is happening in the early solar system, it probably happened in other solar systems as well,” Lauretta said. “It helps us assess the likelihood of the origin of life occurring throughout the galaxy and, ultimately, throughout the universe.”

Once the asteroid samples are back on Earth, they will be catalogued by scientists at NASA’s Johnson Space Center. The agency will keep the majority of the material, studying some of it immediately and sending some samples to research groups around the world. NASA also plans to store a portion in a secure location in New Mexico for safekeeping.

“The Bennu sample is going to provide important science information now, but also for generations to come,” Elsila said.