The shooter shouted “Victory to Lord Ram,” the Hindu god, before pulling the trigger that sent a bullet into Muhammad Nasir Khan’s left eye.

Khan put a trembling hand on his bloody eye socket and his fingers slipped deep into the wound. At that moment, he was sure he would die.

Khan ended up surviving the violence that killed 53 others, mostly fellow Muslims, when it engulfed his neighbourhood in the Indian capital last year – India’s worst communal riots in decades.

The 35-year-old is still shaken and his attacker still unpunished. Khan says he has been unable to get justice due to a lack of police interest in his case. 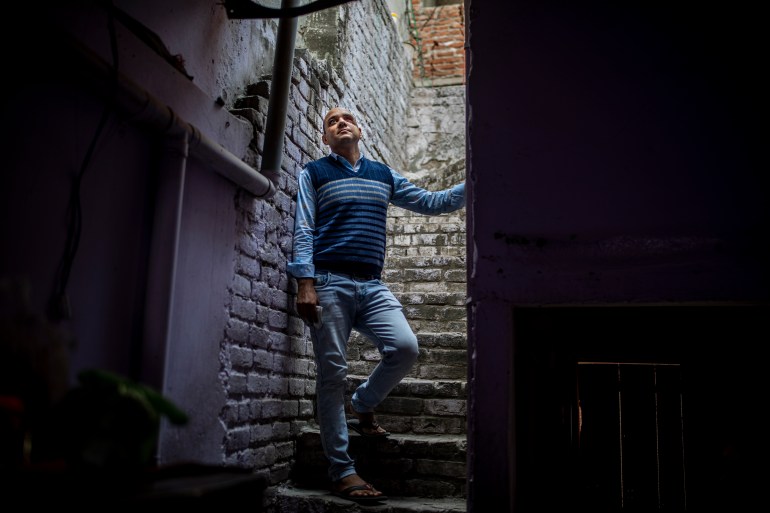 Many of the Muslim victims of last year’s bloody violence say they have come repeatedly up against a refusal by police to investigate complaints against Hindu rioters.

Some still hope the courts will come to their aid, while others believe the justice system under Prime Minister Narendra Modi’s Hindu nationalist government is now stacked against them.

Adding to the sense of injustice is that accounts from Muslim victims as well as reports from rights groups have indicated that leaders of Modi’s Bharatiya Janata Party (BJP) and the New Delhi police force tacitly supported the Hindu mobs during the fevered violence.

New Delhi police did not respond to repeated requests for comment, but they insisted last year that their investigation had been fair and that nearly 1,750 people had been booked in relation to the riots – half of them Hindus.

But a letter one senior police officer sent to investigators five months after the riots appeared to suggest to them they go easy on Hindus suspected of violence, prompting criticism from the Delhi High Court. 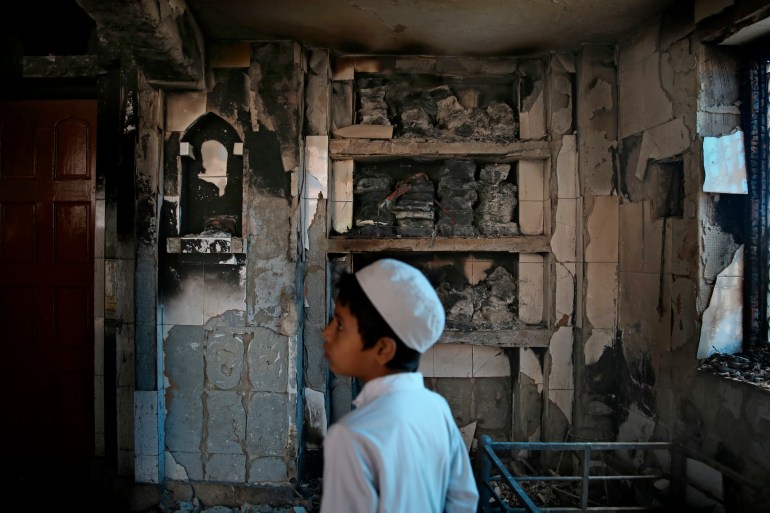 In this February 27, 2020 photo, a Muslim boy stands inside a mosque burned in communal violence in New Delhi [File: Altaf Qadri/AP]Communal clashes have broken out in India ever since the British partition of the Indian subcontinent in 1947.

But in the last seven years, observers say, religious polarisation fuelled by the Hindu-nationalist base of Modi’s party has further deepened the fault lines and raised tensions.

Many believe the catalyst for last year’s riots was a fiery speech by Kapil Mishra, a BJP member.

On February 23, 2020, he gave police an ultimatum, warning them to break up a sit-in by demonstrators protesting against a new citizenship law Muslims say is discriminatory, or he and his supporters would do it themselves.

When his supporters moved in, it triggered pitched street battles that quickly turned into riots. For the next three days, Hindu mobs rampaged through streets hunting down Muslims – in some cases burning them to death in their homes – and torching entire neighbourhoods, including shops and mosques.

Mishra rejects the idea that he’s responsible for the riots, calling the claims “propaganda” to cover up the “preplanned genocide of Hindus by Muslims”.

On Monday, he said his party had no links to the violence, but added, “what I did last year I will do it again if needed”, referring to his speech hours before the riots started.

Many in the area’s Hindu community accuse Muslims of starting the violence in a bid to make India “look bad”. 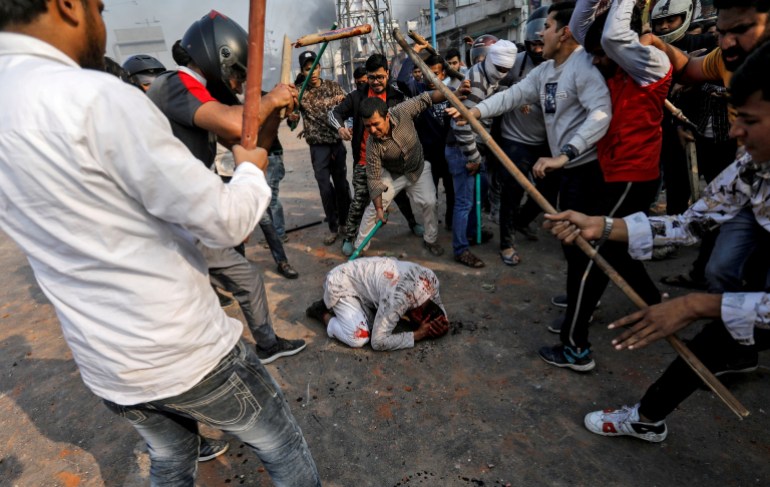 A group of men chanting pro-Hindu slogans beat Mohammad Zubair, 37, during the riots in this February 24, 2020 photo [File: Danish Siddiqui/Reuters] ‘Losing all hopes of justice’

A year on, many Muslim victims of the riots still fear further bloodletting. Hundreds have abandoned their gutted homes, many selling up at throwaway prices, and moved elsewhere.

Those who chose to stay have fortified their neighbourhoods with metal gates in case of more mob attacks. Many say they fear those responsible will never be held to account.

“Everything has changed since the riots,” Khan said. “I think I am slowly losing all my hopes of justice.”

Khan spent 20 days recovering in the hospital after being shot. Since then, he has been seeking justice that he says has been impeded by police at every turn.

Khan’s official police complaint, seen by The Associated Press, named at least six Hindu individuals from his neighbourhood who he said participated in the violence.

“The accused still come to my home and threaten me with killing my entire family,” Khan said in the complaint, adding that he was willing to identify them in court.

His complaint was never officially accepted.

Police, however, filed their own complaint, giving a version of events that placed Khan at least a kilometre (0.6 miles) from where he was shot, suggesting he was injured in the crossfire between two clashing groups. It did not identify his attackers. 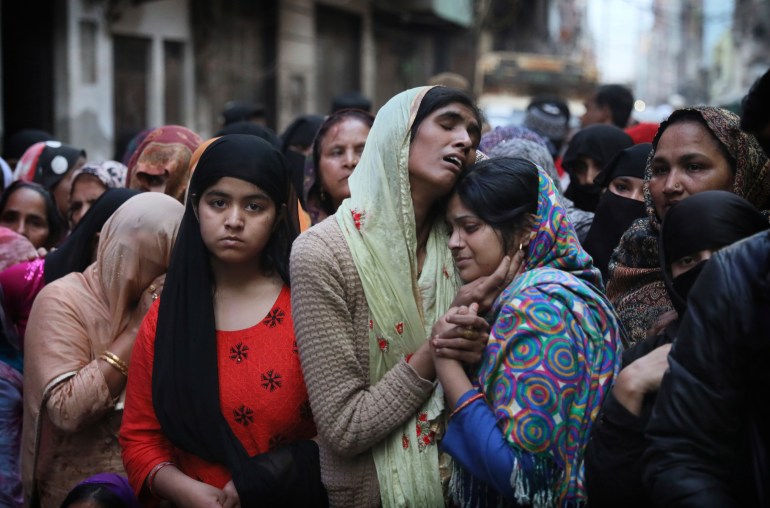 In this February 27, 2020, photo, relatives and neighbours wail near the body of Mohammad Mudasir, 31, who was killed in communal violence in New Delhi [File: Manish Swarup/AP]The stories of many other Muslim victims follow a similar pattern. Police and investigators have dismissed hundreds of complaints against Hindu rioters, citing a lack of evidence despite multiple witness accounts.

They include a man who saw his brother fatally shot, a father of a 4-month-old baby who witnessed his home being torched and a young boy who lost both his arms after Hindu mobs threw a crude bomb at him.

Now, many make weekly trips to lawyer Mehmood Pracha’s office, hoping for justice. Very few have seen their attackers put behind bars. Many others are still waiting for their cases to be heard in court.

Pracha, a Muslim, is representing at least 100 riot victims for free. He said there were multiple instances in which police were provided videos of Hindu mobs, many with links to Modi’s party, “but it seems that police were eager to implicate Muslims” in the riots.

He said in many cases Muslims were also “threatened to withdraw their complaints”.

“The police have acted as partners in crime,” Pracha said.

Multiple videos of the riots seen by the AP show police egging on Hindu mobs to throw stones at Muslims, destroying surveillance cameras and beating a group of Muslim men – one of whom later died.

Multiple independent fact-finding missions and rights groups have documented the role of the police in the riots.

In June 2020, Human Rights Watch said “police failed to respond adequately” during the riots and were at times “complicit” in attacks against Muslims. It also said authorities “failed to conduct impartial and transparent investigations”.

Haroon, who goes by one name, said he was “still scared of going out in the evening”.

He saw his brother Maroof fatally shot by his Hindu neighbours during the riots. The police never identified the accused in his complaint, despite multiple eyewitnesses.

Meanwhile, Haroon said, he was threatened by the police and the accused to withdraw his complaint.

“We were alone then and we are alone now,” he said nearly in tears as his dead brother’s two children sat beside him.

Haroon looked at them and said: “I don’t know what to do.”