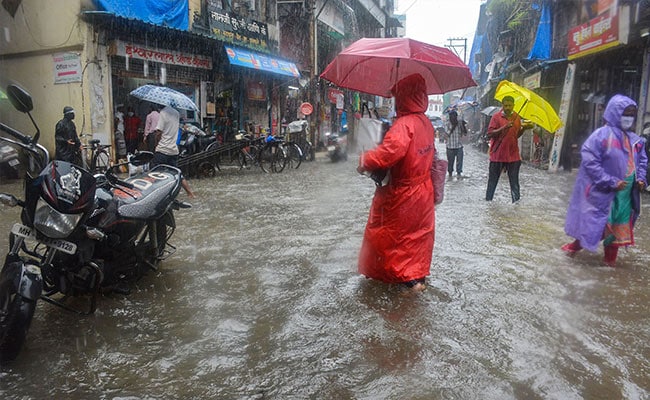 Monsoon 2020 image: People wade through a waterlogged street in Thane on Wednesday

Monsoon 2020 news and updates: Heavy rain battered parts of Mumbai, neighbouring Thane, Palghar and Raigad districts in the last 24 hours, the weather department said on Thursday. More rain is likely in the Konkan region and some areas of central Maharashtra tomorrow, according to the India Meteorological Department.

Some places in Mumbai received 70 mm to 100 mm rainfall in the 24-hour period ending at 8.30 am today, a senior IMD official said. Some areas in Thane saw very heavy rainfall of more than 120 mm, while the observatory at Matheran in Raigad district reported 161 mm rain during the same period.

"As per model guidance, there could be an increase in rainfall over Konkan and Ghat areas of Madhya Maharashtra in next 24 hours. Nandurbar and Dhule could get intense spells," KS Hosalikar, Deputy Director General of Meteorology, IMD Mumbai tweeted.

Searches carried out after suspected drone sighting near IB in Jammu