Bob the cat, whose true story featured in bestselling book and film A Street Cat Named Bob, has died aged 14.

James Bowen penned the book after meeting Bob in 2007 while he was battling a drug addiction.

Mr Bowen had found the ginger cat abandoned and injured and decided to look after him.

The pair quickly became inseparable, with Bob often joining Mr Bowen as he busked and sold The Big Issue on the streets of London.

The book about their relationship became a bestseller and was turned into a 2016 film starring Luke Treadaway.

Following Bob's death on Monday, Mr Bowen said: "Bob saved my life. It's as simple as that. He gave me so much more than companionship. With him at my side, I found a direction and purpose that I'd been missing.

"The success we achieved together through our books and films was miraculous. He's met thousands of people, touched millions of lives."

He added: "There's never been a cat like him. And never will again. I feel like the light has gone out in my life. I will never forget him."

Hodden & Stoughton, which published the book, said in a statement: "As James and Bob continued to find fans all over the world, Bob led an incredible life meeting well-wishers at book signings, travelling the world and coping with feline fame.

"He was an extraordinary cat who will be greatly missed." 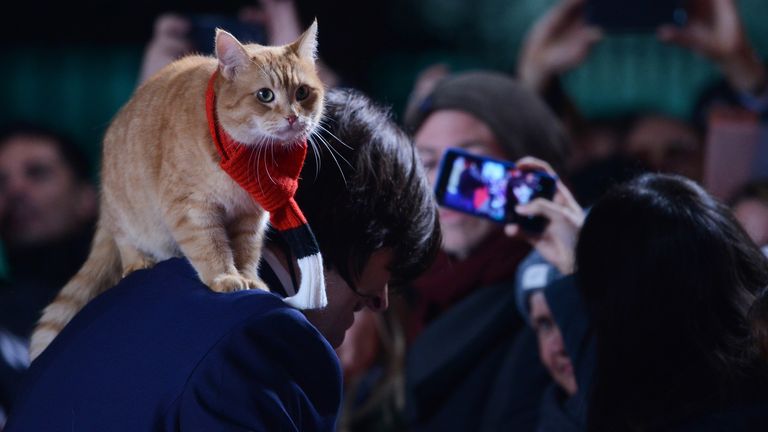 Image: Bob and his owner were close companions

RIP Bob was trending on Twitter on Tuesday evening, as many paid tribute.

One person said the news had "actually broken my heart", while another said the cat would be "greatly missed by all".

Bob will appear as himself in a film sequel, A Gift from Bob, later this year.