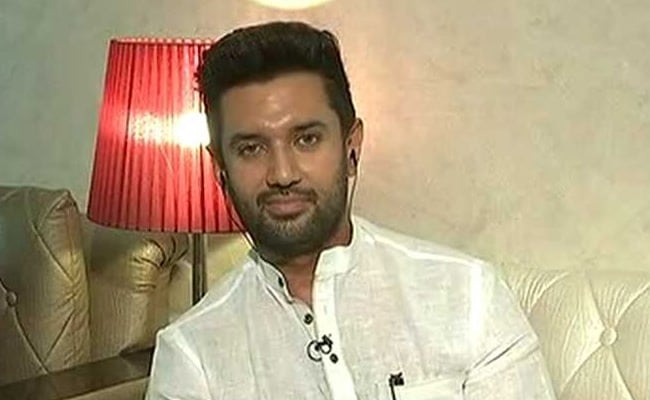 The assembly elections in Bihar are due in October-November.

Lok Janshakti Party president Chirag Paswan on Saturday said that employment for migrants, who have returned to Bihar from across the country, should be the top priority for the ruling NDA as it prepares for the state assembly polls.

With some of his comments seen to be critical of Chief Minister Nitish Kumar-led government, Mr Paswan said he never doubted Mr Kumar's intentions but there have been "shortcomings" which he as an honest ally has highlighted.

"Nitish ji emerged as an alternative to jungle raaj and was known as ''vikas purush''. But, yes, there have been shortcomings. I am not levelling allegations but offering suggestions for improvement as an honest ally," he told PTI.

Mr Paswan said the Bihar government's handling of the migrant crisis, triggered by the nationwide lockdown to curb COVID-19, "could have been better" and counted law and order as a concern, saying serious crimes like murder and robbery have been rising.

The Lok Sabha MP from Jamui in Bihar called for a common minimum programme to guide the NDA government in case it retains power.

The assembly elections in Bihar are due in October-November.

Employment, especially for its migrant population, health and education should be the top priorities for the NDA, Paswan said.

Asserting that the opposition alliance, which includes the RJD and Congress, is not in a position to pose any serious challenge to the BJP-led National Democratic Alliance, he said the saffron combine may win more than 225 of the state's 243 assembly seats.

When Mr Kumar became the chief minister for the first time in 2005, he had said that he will work to bring back all migrants in three months and give them employment, Mr Paswan noted, adding that a "golden opportunity" had arrived for the JD(U) president to "realise his dream" after all these years.

From religious tourism to numerous paper and jute mills, which have been closed down over the years, Bihar offers tremendous employment opportunities, he said.

Asked about the number of seats the LJP will contest in the state polls, he said that will be discussed in the seat-sharing talks among the BJP, JD(U) and the LJP.

His party had contested 42 seats in the 2015 polls, and he would like the share to remain the same but much will depend on talks among the allies, he said.

Mr Kumar's JD(U) was then part of the opposition alliance which had scored a big win in the last assembly elections. He joined the NDA in 2017.

Mr Paswan asserted that his party had strengthened its organisation in every assembly constituency of the state and has worked especially intensively in 119 seats which are represented by neither the JD(U) nor the BJP in the current assembly.

With the coronavirus pandemic ruling out any big political gathering so far, he said campaigning through social media will play a big role in the electioneering for the state polls.

Subsidy on canteen food served in Parliament canteens ends; prices to go up

Question Hour To Make A Return In Budget Session Of Parliament