Mauritius: 'Most of the of oil' removed from damaged ship 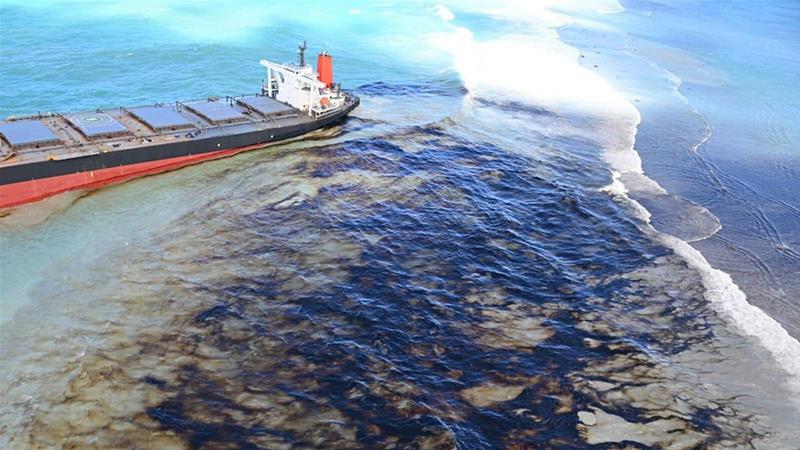 The ship was sailing from China to Brazil when it hit coral reefs near Pointe d'Esny on 25 July [File: EPA-EFE]

Most of the oil left on a Japanese bulk carrier that has leaked an estimated 1,000 tonnes off the Mauritius coast has been pumped off, shipowner Nagashiki Shipping said on Wednesday.

On Tuesday, Mauritian Prime Minister Pravind Jugnauth said the MV Wakashio was still holding 2,000 tonnes of oil and was expected to break up, raising concern of a major ecological disaster.

"I heard the collection is almost over, but it is hard to tell if there is absolutely no oil left on the ship," Yoshinori Fukushima, a spokesman for Nagashiki, said.

The ship struck a coral reef and went aground off the southeast Mauritius coast on July 25.

Oil from the stricken vessel has reached some of the Indian Ocean island's most pristine beaches, threatening corals, other local wildlife and the country's tourism industry.

Former colonial ruler France has said it will assist Mauritius with the clean up and Japan said it will send experts to help.

Japan P&I Club, the only organisation in Japan that underwrites protection and indemnity (P&I) insurance for ocean-going vessels and coastal ships, said it had yet to estimate the cost of the clean up.

"We are trying to make internal estimates under different scenarios ...including the worst and the best, but we don't have any figures yet that we can disclose," spokesman Koichi Miyahiro said.

Since the accident, MV Wakashio has been seeping fuel into a protected marine park boasting unspoiled coral reefs, mangrove forests and endangered species.

Mauritian authorities earlier declared an environmental state of emergency and appealed for international help, though some criticised the reaction as being too slow.

Conservationists said they were starting to find dead fish as well as seabirds covered in oil, increasing fears of an ecological catastrophe despite a massive local clean-up operation that includes making floating booms from leaves and human hair.