Masks On, Young Officers March At IMA Passing Out Parade Without Parents 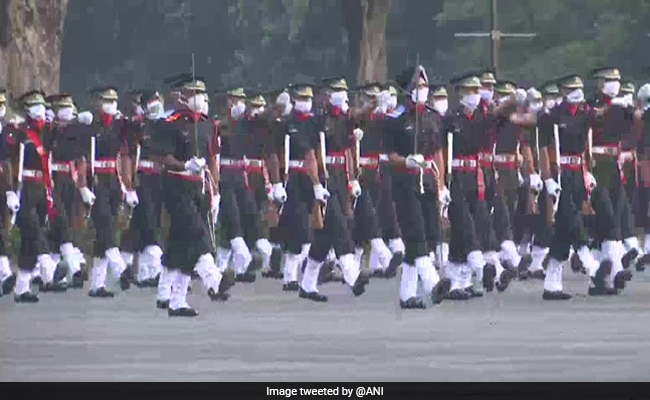 The Passing Out Parade symbolises the transformation of a cadet into a young officer.

Saturday was a day of many firsts at Dehradun's Indian Military Academy (IMA), where the Passing Out Parade was conducted for 423 Gentlemen Cadets without their guardians in attendance to avoid crowding because of the coronavirus pandemic.

As many as 333 Indian and 90 Gentleman Cadets from nine friendly foreign countries marched wearing masks at the ceremony that was livestreamed on the official YouTube channel of the Indian Army and Doordarshan, among others.

The ceremony was broadcast, starting 6am today, for the benefit of cadets' guardians. Only the IMA staff and other the trainees - all of whom were seated at a distance of one metre from each other - witnessed the parade.

Army chief General MM Naravane reviewed the parade, which is celebrated as a coming of age ceremony for cadets. Cadets' parents, or relatives, usually pip-in the ranks on their shoulders after which they officially become commissioned officers in the Indian Army.

The cadets will not be allowed to go home before joining their respective arms because of the Coronavirus crisis.

Images of the Passing our Parade flooded Twitter as congratulatory messages poured in from all quarters.

General MM Naravane #COAS reviewed the impressive Passing Out Parade of #IMA#Dehradun. 423 Gentleman Cadets of 146 Regular & 129 TGC course including 90 from friendly foreign countries got commissioned into the Army.#IndianArmy#NationFirstpic.twitter.com/W8peJceRfM

This day 28 years ago.....
Passing out parade at Air Force Academy. A special day for me; and a special year for IAF celebrating Diamond Jubilee. pic.twitter.com/kt6Vsr8LN4

Every six months, the IMA organises a Passing Out Parade for its cadets who join different arms and services of the Indian Army while the foreign cadets go onto join the armies in their respective countries. The Passing Out Parade symbolises the culmination of rigorous training and transformation of a cadet into a young officer to shoulder the nation's responsibility.