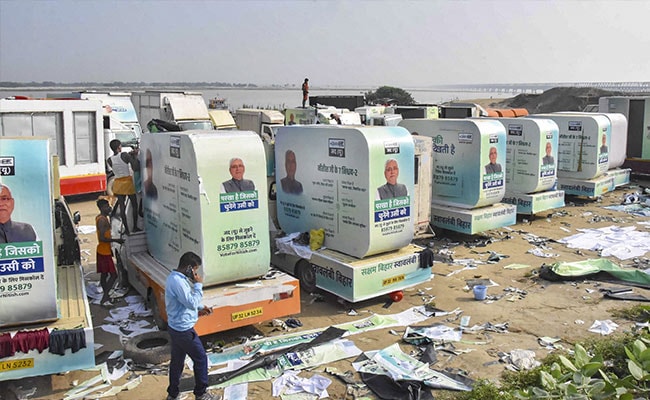 Bihar will vote on October 28, November 3 and 7 for a new government.

Masks will be a must for attending political rallies in Bihar which is preparing to hold assembly elections later this month, the state government has said. In a set of guidelines issued by the home department, masks have been made mandatory at all indoor and outdoor rallies along with a cap of 200 people in closed halls and six feet of social distancing.

The Election Commission, meanwhile, doubled the broadcast time allotted to recognised political parties in Bihar on Doordarshan and All India Radio during the upcoming state assembly polls in view of the COVID-19 pandemic and the increased importance of "non-contact based" campaign.

Each recognised national and regional party will be given a base time of 90 minutes. The facilities will be available from the regional centre of All India Radio and Doordarshan and relayed by other stations within Bihar, it said.

The additional time to be allotted to a party has been decided on the basis of its poll performance in the last Bihar Assembly election in 2015.

"A base time of 90 minutes will be given to each national party and recognised state party of Bihar uniformly on the regional kendras of Doordarshan network and All India Radio network in Bihar," the commission said.

No party will be allocated more than 30 minutes in a single broadcast session.

The period of broadcast will be between the last date of filing nominations and two days before the date of polling in Bihar.

The state will go to polls in three phases on October 28, November 3 and November 7. The counting of votes will take place on November 10.

"The Prasar Bharati Corporation in consultation with the Commission will decide the actual date and time for broadcast and telecast. This will be subject to the broad technical constraints governing the actual time of transmission available with the Doordarshan and All India Radio," the poll body said.

The parties will be required to submit transcripts and recordings in advance.

"In addition to the broadcast by parties, the Prasar Bharati Corporation will organise a maximum of four panel discussions and/or debates on the Kendra/Station of Doordarshan/All India Radio. Each eligible party can nominate one representative to such a programme," the commission said.

Bihar will vote on October 28, November 3 and 7 for a new government and the results will be announced on November 10.