A court in the Philippines has found journalist Maria Ressa, and a former Rappler reporter Reynaldo Santos Jr, guilty of cyber libel, in a controversial case seen as a major test of press freedom under the administration of President Rodrigo Duterte.

In a decision issued on Monday, the court sentenced Ressa, the executive editor of the news website Rappler, and Santos Jr to six months and one day to as much as to six years in jail. It allowed both to post bail, pending an appeal. They are the first two journalists in the Philippines to be convicted for cyber libel.

Judge Rainelda Estacio-Montesa also ordered the payment equivalent to $8,000 for moral damages and exemplary damages to the businessman who lodged the complaint.

In a press conference following the verdict, Ressa vowed to fight the case, saying the case of Rappler was "a cautionary tale" for the Philippine media.

"It is a blow to us. But it is also not unexpected," Ressa said. "I appeal to you the journalists in this room, the Filipinos who are listening, to protect your rights. We are meant to be a cautionary tale. We are meant to make you afraid. But don't be afraid. Because if you don't use your rights, you will lose them.

"Freedom of the press is the foundation of every single right you have as a Filipino citizen. If we can't hold power to account, we can't do anything," she added, as she fought back tears.

Santos said that he was "disappointed" of the verdict and felt "very sad" at the outcome.

The case is the first of at least eight active cases filed against Ressa and her media organisation since Duterte came to office in 2016.

In a statement, the National Union of Journalists of the Philippines (NUJP) called the decision "a dark day" not only for independent Philippine media but for all Filipinos.

"The verdict basically kills freedom of speech and of the press," the organisation said. "But we will not be cowed. We will continue to stand our ground against all attempts to suppress our freedoms."

Amnesty International's Regional Director Nicholas Bequelin described the verdict as a "sham" and should be quashed.

"The accusations against them are political, the prosecution was politically-motivated and the sentence is nothing but political," Bequelin said in a statement. "This guilty verdict follows the shutdown of ABS-CBN, which remains off the air - also after coming under the President's attacks. The international community cannot remain silent in the face of this brazen vendetta against the press."

The cyber libel case against Ressa and her publication stemmed from a 2017 complaint filed by a businessman over a Rappler story that was published in 2012, before the cybercrime law was even passed.

The businessman, Wilfredo Keng, said his reputation was "defamed" when he was linked to the then-Supreme Court Chief Justice, who was later removed from office through an impeachment.

The libel complaint was initially dismissed in 2018, but government investigators under the office of President Duterte, quickly reversed their decision and recommended that Ressa and Santos be prosecuted. Prosecutors said they are only following the law.

Around the same time, Duterte had sought to close Rappler for alleged foreign ownership and tax evasion - allegations Rappler denied.

The news site had aroused Duterte's ire for its relentless coverage of the war on drugs on which thousands of people have died. It also exposed a pro-Duterte network circulating alleged fake news on social media.

Aside from Rappler, Duterte has also targeted and forced the closure of ABS-CBN, the largest media company in the Philippines, while the owners of the country's largest newspaper, Philippine Daily Inquirer, were forced to sell the publication to a Duterte ally after publishing news reports and editorials critical of the mounting deaths.

In a statement, the International Center for Journalists condemned the "state-sponsored legal harassment in the Philippines.

"ICFJ will continue to support her and her team as they report the news - despite official attempts to silence them." 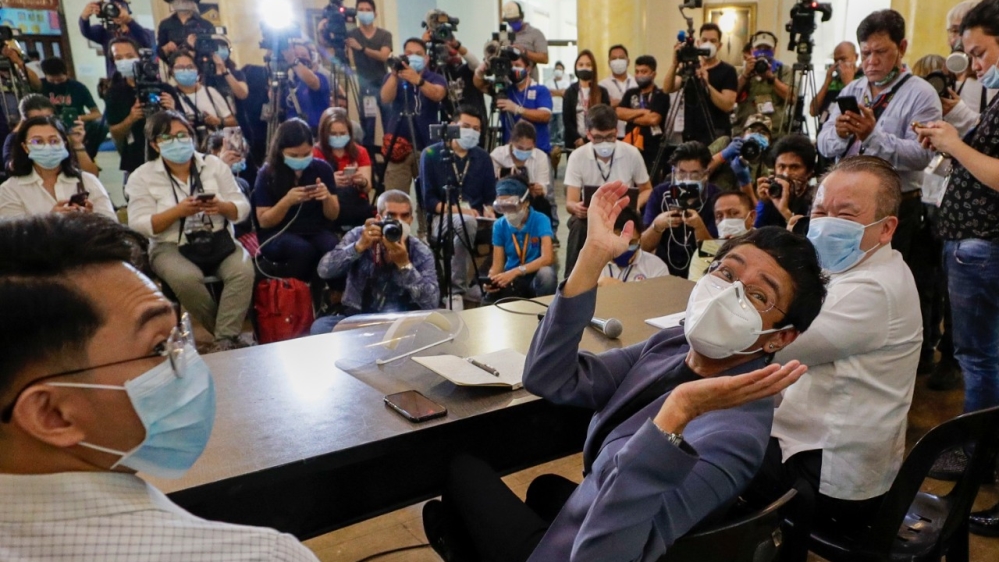 In a press conference following the verdict on Monday, Ressa vowed to fight the case, saying the case of Rappler is 'a cautionary tale' for the Philippine media [Aaron Favila/AP]

Ahead of the verdict, Carlos Conde, of Human Rights Watch in the Philippines, said the case against Rappler "should never have been filed to begin with."

"The absurdity of this particular case against Maria Ressa - prosecutors deemed the story in question 'republished' after Rappler corrected one word that was misspelled - suggests the desperation of those behind it to silence her and Rappler," Conde said in a statement to Al Jazeera.

Jose Manuel Diokno, a leading human rights lawyer, predicted a "long battle ahead" as the defendants moved to file an appeal.

"This is not the end of it," said Diokno, a critic of the Duterte administration and opposition candidate for senator in 2019. "There's a strong need for us to generate a lot of public opinion, a lot of press on the government, on the courts, to look very deeply into this case. The ramifications of this case go deep into whether we can still call the country a real democracy."

Can China be a global leader?