A man was shot on Monday night in the US state of New Mexico as protesters in its largest city tried to tear down a bronze statue of a Spanish conquistador outside the Albuquerque Museum, prompting the city to announce that the statue would be removed until officials determine the next steps.

The man was taken to a hospital and was listed in critical but stable condition late on Monday, said Albuquerque police spokesman Gilbert Gallegos.

More: Mapping anti-racism solidarity protests around the world Who was Edward Colston, why was his statue toppled? Who was Leopold II, why did Belgium's Antwerp remove his statue?

A confrontation erupted between protesters and a group of armed men who were trying to protect the statue of Juan de Onate before protesters wrapped a chain around it and began tugging on it while chanting: "Tear it down." One protester repeatedly swung a pickax at the base of the statue.

Moments later, a few gunshots could be heard down the street and people started yelling that someone had been shot.

Gallegos said police used tear gas and flashbangs to protect the officers who intervened and arrested those involved in the shooting. He said they were disarmed and taken into custody for questioning as police worked to secure the scene. He said detectives were investigating the incident with the help of the FBI but he did not immediately release any other information.

"The shooting tonight was a tragic, outrageous and unacceptable act of violence and it has no place in our city," Mayor Tim Keller said in a statement.

"Our diverse community will not be deterred by acts meant to divide or silence us. Our hearts go out the victim, his family and witnesses whose lives were needlessly threatened tonight. This sculpture has now become an urgent matter of public safety."

Democratic Governor Michelle Lujan Grisham issued a statement in which she took aim at the armed individuals, saying they were there to menace protesters. She said no matter who strikes first, there would be no room in New Mexico for any sort of escalation of what she called "reckless, violent rhetoric".

"The instigators this evening will be rooted out, they will be investigated, and they will be held accountable to the fullest extent of the law," she said.

The violence came just hours after activists in northern New Mexico celebrated the removal of another likeness of Onate that was on public display at a cultural centre in the community of Alcalde. Rio Arriba County officials removed it to safeguard it from possible damage and to avoid civil unrest before a scheduled protest.

A forklift pried the enormous bronze statue of Onate on horseback from a concrete pedestal. Cheers erupted among bystanders who saw the memorial as an affront to Indigenous people and an obstacle to greater racial harmony, though several people also arrived to defend the tribute to Onate.

County Manager Tomas Campos said the statue was placed in storage for its own protection. He expects the three-member county commission to solicit public comment on what to do next with the public works project commissioned by the state in the early 1990s.

"This is public property and I'm not going to allow it to be damaged," Campos said. "Plus, I don't feel like risking my sheriff's deputies or state police to defend it."

The Onate statues have been a source of criticism for decades.

Onate, who arrived in present-day New Mexico in 1598, is celebrated as a cultural father figure in communities along the Upper Rio Grande that trace their ancestry to Spanish settlers. But he is also reviled for his brutality.

To Native Americans, Onate is known for having ordered the right feet cut off of 24 captive tribal warriors, precipitated by the killing of Onate's nephew. In 1998, someone sawed the right foot off the statue - an incident that weighed in the decision to stash away the statue. 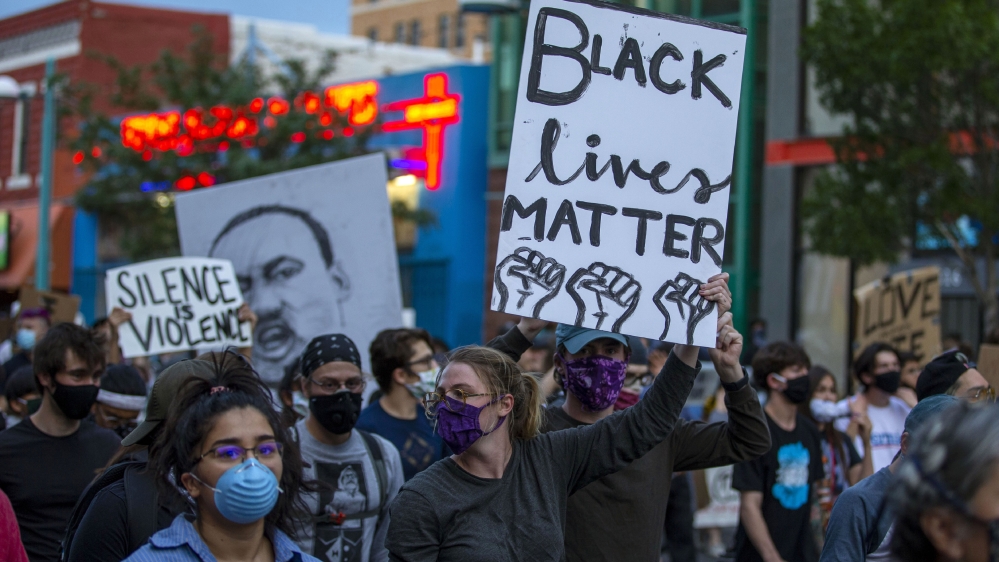 Demonstrations against the death of George Floyd, which energised the statue toppling efforts across in the world, in downtown Albuquerque [Andres Leighton/AP Photo]

Luis Pena of Espanola, an artist and computer network engineer, started a public petition last week to remove the statue in Alcalde. He said he was heartened to see it taken off display.

Removal of the statue was followed by a few heated roadside discussions about local colonial history, under the gaze of half a dozen sheriff's deputies.

Tony Valerio, 65, rushed to the site after a neighbour alerted him that the statue was being taken down.

"He's my hero. He brought a lot of good things to New Mexico," Valerio said of Onate. "What's next? The Statue of Liberty?"

Lujan Grisham, who has campaigned on her heritage as a 12th-generation New Mexican, called the statue's removal a "step in the right direction" in an earlier Twitter post.

New Mexico's multiculturalism is its strength. Understanding our complicated history – and acknowledging the imbalanced power structures within it – is a process, and this is a step in the right direction.https://t.co/H7tPnFLVaQ

By Monday evening, dozens had joined a celebratory gathering with Native American dancing and drumming outside the cultural centre where demonstrators left handprints in red paint on the empty statue pedestal.

Meanwhile, the scene in Albuquerque turned to chaos as people ran for cover. Police in riot gear could be seen taking at least two people into custody following the shooting as some protesters heckled the officers. It was more than two hours before the area was cleared.

Monuments to European conquerors and colonists around the world are being pulled down amid an intense re-examination of racial injustices in the wake of George Floyd's death at the hands of police.

Albuquerque city officials have promised to convene a council of community leaders and artists to consider the concerns about the public art piece.

Titled La Jornada, the sculpture depicts Onate leading a group of Spanish settlers to what was then the northern-most province of New Spain in 1598.

The collection of statues includes an Indigenous guide, a priest, women settlers and soldiers. The names of the families who accompanied Onate are listed on plaques below as part of the Wall of Spanish Ancestral Heritage.