The man photographed carrying a Confederate battle flag inside the US Capitol during last week’s mob attack on the building in Washington, DC has been arrested.

The Justice department said on Thursday that Kevin Seefried, who was pictured holding the flag, was arrested in the state of Delaware along with his son Hunter Seefried, who was seen on video punching out a glass window in the Capitol complex, the Reuters news agency reported.

The Seefrieds were charged with unlawfully entering a restricted building, violent entry and disorderly conduct on Capitol grounds and degradation of government property.

Separately on Thursday, the Justice Department confirmed to Reuters that a retired firefighter suspected of throwing a fire extinguisher at police during the attack was arrested.

Robert Sanford, 55, of Chester, Pennsylvania, will appear in a virtual hearing in federal court in Allentown, Pennsylvania on Thursday to face charges of unlawful entry, civil disorder and assaulting, resisting or impeding police.

According to court documents, Sanford was captured on video hurling what appears to be a fire extinguisher at police.

BREAKING: @WSJ reports: A retired Pennsylvania firefighter was arrested today for allegedly throwing a fire extinguisher that hit 3 police officers at the pro-Trump riot at the U.S. Capitol as captured on videohttps://t.co/30WFdH2MVy

The Justice Department has brought more than 70 criminal cases so far since supporters of President Donald Trump stormed the Capitol on January 6, trying to prevent Congress from certifying Joe Biden as the winner of the US presidential election.

Many of the people arrested so far were captured on social media bragging about taking part in the assault, and the FBI has been combing through more than 100,000 videos and photographs.

After the violence was quelled, most of the rioters were allowed to leave the Capitol, meaning law enforcement has had to track them down in the days since.

One such person was Hunter Ehmke, charged by the Justice Department on Thursday with damaging government property, obstructing an official proceeding and violent entry.

According to court documents, a Capitol Police officer witnessed Ehmke smash a window at the Capitol and rushed at him with his shield to try to stop him.

The officer “lost grip of the shield and fell” on to shards of glass, the documents say. Police managed to detain Ehmke but the crowd started to become aggressive and threatened police if they took Ehmke away.

“Due to the growing aggression of the large crowd that far outnumbered the officers and the exigent circumstances at the time, officers made the decision to allow Ehmke depart under his own power,” according to the government’s statement of facts.

Ehmke was due to be in court in the Central District of California at 1pm PST (21:00 GMT).

Some of those arrested appear to belong to far-right and white nationalist movements.

A man photographed wearing a “Camp Auschwitz” sweatshirt during the riot was arrested Wednesday in Virginia, authorities said.

2) this guy was just arrested. pic.twitter.com/CRkKSGRn4y

Robert Keith Packer, 56, was arrested in Newport News, where he lives. He was charged with violent entry and disorderly conduct on Capitol grounds, and unlawfully entering a restricted building.

Auschwitz was the Nazi death camp where at least 1.1 million people, mostly Jews, were systematically killed during the Holocaust.

Others, including Jake Angeli, a QAnon conspiracy theory adherent wearing horns and fur, whose legal name is Jacob Anthony Chansley and is reported to be a US Navy veteran, was arrested last Saturday.

QAnon is a wide set of conspiracies that hold Trump has been chosen to defeat a “Deep State” cabal of liberal politicians and celebrities who engage in child sex trafficking and harvest their blood to stay young.

Richard Barnett, who was photographed inside House Speaker Nancy Pelosi’s office and allegedly took some of her mail, was arrested and charged last Friday. 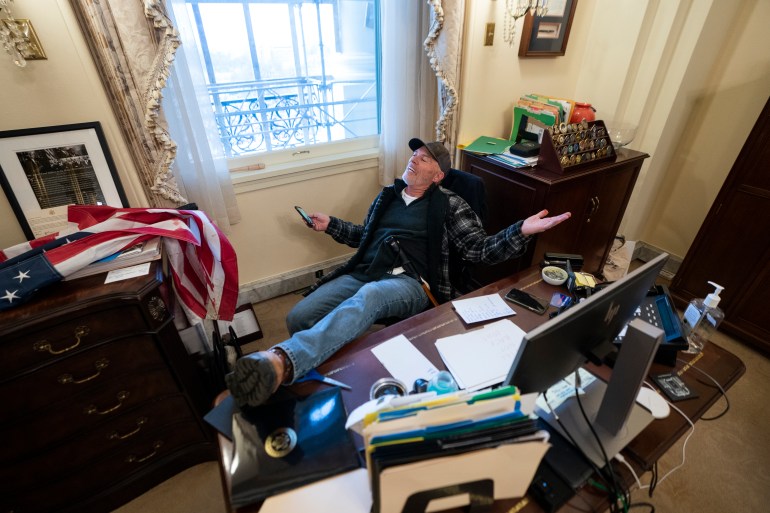 Richard Barnett sits on the desk of US House Speaker Nancy Pelosi, after supporters of US President Donald  Trump breached the US Capitol security on January 6 [Jim Lo Scalzo/EPA-EFE]Courts enhanced one of his charges on Wednesday to entering a restricted building without lawful authority while carrying a dangerous weapon. The enhancement carries a maximum sentence of 10 years.

White nationalist Tim Gionet, who goes by “Baked Alaska”, was seen inside House Speaker Nancy Pelosi’s office during one of his livestreams.

users on Tim Gionet's, aka Baked Alaska, live stream on DLive are calling to give lawmakers the "rope" and to "hang all the congressmen" on DLive while he's streaming inside the Capitol building. pic.twitter.com/fq9t7KAlfA

Gionet faces charges surrounding allegations he used mace on a bouncer while being removed from a bar in Scottsdale, Arizona. He was released without bail provided he agreed to stay in the state and follow the law.

Five people have died as a result of the riot.

The deadly violence last week led to the impeachment of Trump on Wednesday by the House of Representatives on a charge of “inciting an insurrection”.