Monday’s session was cancelled over COVID infections with the fragile government under pressure over its handling of the pandemic.

Opposition members of Malaysia’s parliament were met by riot police and threatened with arrest as they tried to march to the parliament building on Monday amid rising political tension over the government’s handling of the COVID-19 pandemic.

Parliament began a “special session” last week after a months-long shutdown that was triggered by a declaration of emergency in January because of COVID, with opposition politicians lambasting Prime Minister Muhyiddin Yassin and his cabinet over the continuing rise in cases and deaths despite months of an increasingly strict lockdown.

The session was supposed to continue into Monday but was cancelled after a number of COVID-19 cases were confirmed in Parliament.

Dozens of MPs instead gathered in Merdeka Square in the heart of Kuala Lumpur, including opposition leader Anwar Ibrahim and former two-time Prime Minister Mahathir Mohamad, calling on Muhyuddin to resign. They planned to walk to Parliament two kilometres (1.2 miles) away.

“Thousands have died but he is happy to stay,” Mahathir was quoted as saying by online newspaper Malaysiakini. Anwar said that Muhyiddin had lost his legitimacy.

Muhyiddin has been under intensifying pressure since coming to power in March 2020 after a power grab led to the collapse of the government that was voted into power in a historic May 2018 election. Muhyiddin was appointed prime minister after convincing the king he had the necessary support in Parliament to govern but has faced regular calls to prove his majority.

Anger has grown in recent months as the COVID-19 death toll continued to rise despite a prolonged lockdown that has left many people struggling. The country’s total caseload rose above one million last month and a further 160 deaths were reported on Sunday. 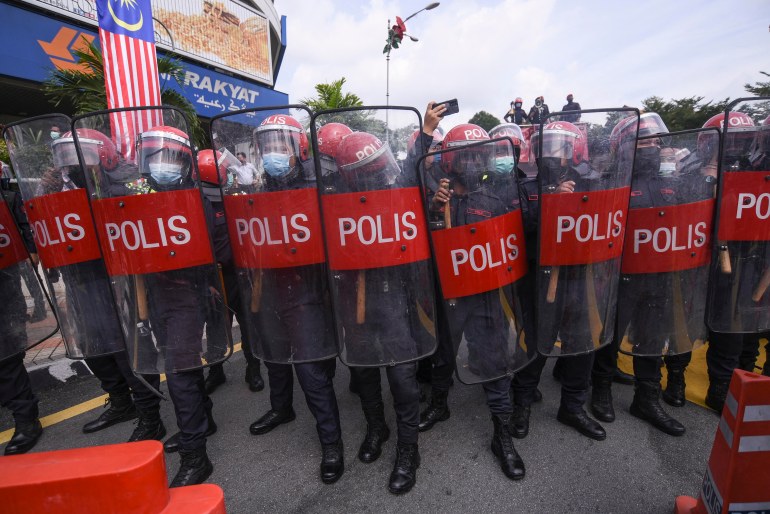 “We are seeing heightened opposition to Muhyiddin’s administration from students, activist(s), contract doctors and ordinary Malaysians. And we are witnessing the govt using the police as its tool to curb legitimate dissent,” Charles Santiago, an opposition MP from the hard-hit Klang area, wrote on Twitter. “But these protests won’t stop because the people have had it and their patience has run out. It’s embarrassing to hold on to power despite having been caught out and especially when good governance is needed to mitigate the consequences of a raging pandemic.”

On Saturday, a few hundred people marched in Kuala Lumpur in a socially distanced “Lawan” (fight) rally while junior doctors walked off the job over pay and conditions a week ago. Both incidents are being investigated by police.

The parliament session was cancelled after mass testing following the discovery of two positive cases found 11 cases of COVID-19 among the more than 1,000 politicians and staff who work there.

This must be the only “democratic” Govt tht resorts to intimidation incl bringing water canon trucks, Fed Reserve Unit with shields & batons, police at EVERY entry point to Parliament just to block 100+ MPs frm goin to Parliament.
Where else are MPs supposed to speak for the ppl? pic.twitter.com/XAQWgnEwZQ

Opposition politicians pointed out that many factories and offices in Malaysia were continuing to operate despite the country’s high level of cases and noted that the positivity rate in Parliament was below the five percent limit set by the World Health Organization.

Politicians were also among the first in Malaysia to get vaccinated. Just over 20 percent of Malaysian residents now have both jabs and the government is accelerating the programme.