Major warmup on the way for millions across the central, eastern U.S.

After multiple one-day teases of springlike warmth amidst an overall chilly end to meteorological winter, good news is in store for many fans of warm weather across the central and eastern United States.

The extended warmup craved by the residents who are tired of constantly bundling up against the cold day-in and day-out is forecast to finally arrive for the upcoming week.

"The seeds of the warmth will be planted over parts of the Plains and southern Canada Prairies from this weekend into early next week," AccuWeather senior meteorologist Alex Sosnowski said. 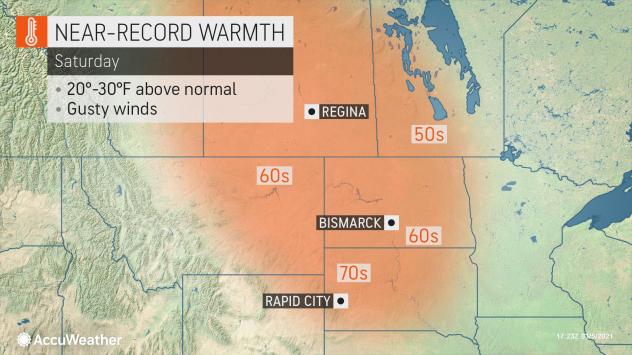 The driving force behind the upcoming warm blast will be a pronounced northward bulge in the jet stream. As this bulge builds farther northward and eastward each day through the middle of the upcoming week, it will allow unseasonably warm air to spread across much of the Central and Eastern states.

The arrival time of the warmest air will vary from region to region. The first portion of the country set to receive warmth more akin to the middle of spring this upcoming week will be the nation's midsection. 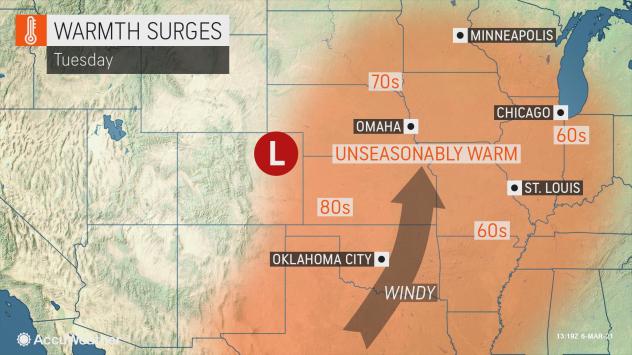 "A broad flow from the southwest will transport unseasonably warm air northward into the Upper Midwest and western Great Lakes early this upcoming week," AccuWeather senior meteorologist Dan Pydynowski explained. "High temperatures into the 70s can extend as far north as parts of South Dakota and Minnesota on Tuesday."

Many daily high temperature records in these northern areas are in serious jeopardy of being completely shattered on Tuesday. A few of these records even date back to the late 1800s.

"The normal high for March 9 in Sioux Falls is only 40 degrees," Pydynowski pointed out. "Average high temperatures for the city do not reach into the low 60s until late April."

One of the oldest high temperature records in jeopardy this upcoming week belongs to the city of Minneapolis.

"The current record high of 61 degrees for March 9 was set back in 1879," AccuWeather meteorologist Matt Benz noted. "With a forecast high of 68, that 142-year-old record is in danger of being shattered Tuesday."

In addition to warmer air flowing from the south, forecasters say there will be another important factor that will allow temperatures to soar 20 to 30 degrees above normal across the nation's midsection.

"This time of the year it's all about snow cover, or the lack thereof. Once the snow melts, the landscape goes from a surface that reflects incoming sunlight to a surface that absorbs sunlight," Benz explained. 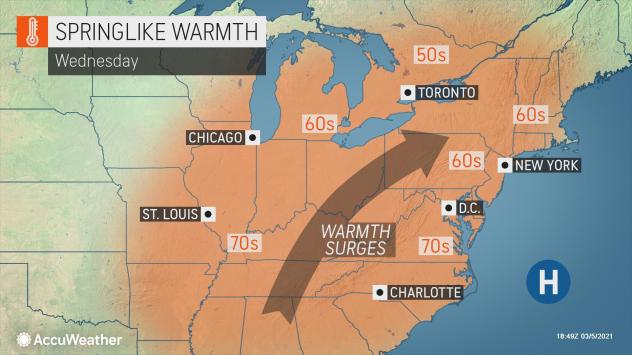 While conditions will slowly begin to warm across the eastern U.S. on Monday, the core of the warmest air will arrive on Wednesday.

Rather than early March, it will feel more like mid- to late April for much of the eastern half of the U.S. on Wednesday. While temperatures are likely to come up short of record levels in most locations across the East, temperatures will still soar to levels 15 to 20 degrees above normal.

This abrupt warmup can lead to weather whiplash for some residents. Portions of the Northeast and mid-Atlantic are forecast to go from high temperatures in the 30s to upper 40s this weekend to upper 50s to near 70 on Wednesday. 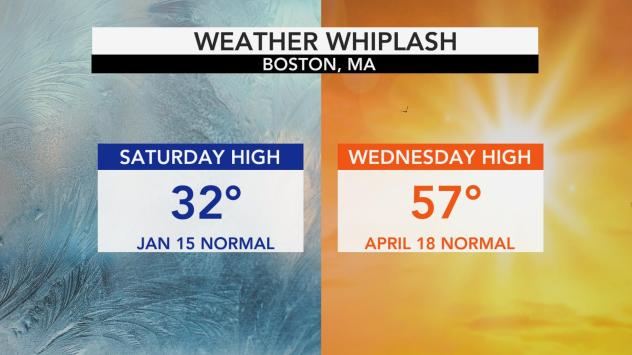 Cities like Boston, Philadelphia, New York City and Washington, D.C. can all experience a jump to conditions 20-25 degrees warmer for Wednesday than over the weekend.

This increase in warmth across the country will be good news for residents hoping to reduce their electric bills after a chilly February. A few days of unseasonably warm daytime temperatures and temperatures generally above freezing overnight will help to ease the heating burden on power grids and the wallets of millions across the Central and Eastern states.

The upcoming week will also be a great opportunity for those residents still cooped up inside due to the ongoing coronavirus pandemic to get some much-needed outdoor activity.

This warmth is forecast to hang on until the next disturbance takes shape over the center of the country later next week. During Wednesday and early Thursday in the Midwest and later Friday into Saturday in the Northeast, a cold front is forecast to push eastward and trim temperatures back again.

Microsoft to acquire speech recognition company Nuance Communications for $19B