Magician Siegfried Fischbacher, who entertained millions as one half of the Las Vegas act Siegfried & Roy, has died at the age of 81, his publicist has confirmed.

The illusionist died at his home in the Nevada city on Wednesday, after suffering with pancreatic cancer, Dave Kirvin of Kirvin Doak Communications said.

His death comes less than a year after that of his showbusiness partner Roy Horn, who suffered complications from COVID-19 in 2020. 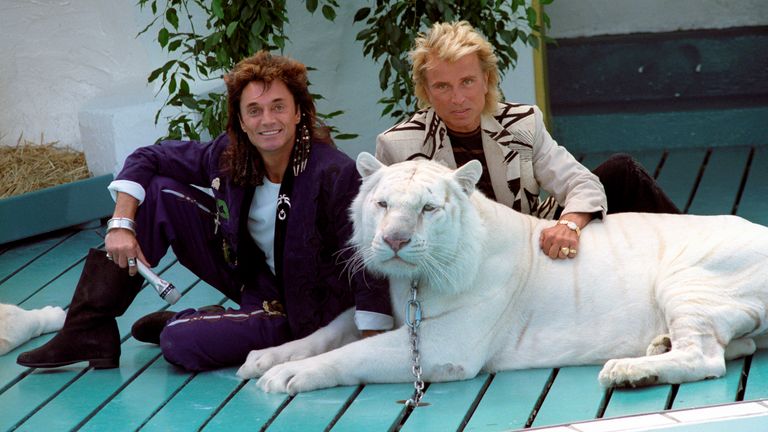 Image: The pair were famed for their shows featuring rare white tigers and lions

German news agency DPA reported Fischbacher's sister, a nun who lives in Munich, said she had talked to her brother on the phone before he died and that they had prayed together.

"I could pray with him and tell him that I will always be with him in my heart," she said.

Fischbacher and his illusionist partner Horn, who were both born in Germany, co-founded their stage act after meeting on a cruise ship in the late 1950s.

They took the show to Las Vegas in 1967 and went on to perform for the next four decades, becoming a Vegas institution, famed for their act built around white tigers and lions.

Their $10m compound was home to dozens of rare animals over the years, with the white lions and white tigers the result of a preservation programme that began in the 1980s. Image: Horn died in 2020 after suffering with COVID-19

Horn was critically injured on his 59th birthday in 2003, when he was mauled by a tiger during a performance at the Mirage hotel, putting an end to the duo's regular shows. However, they continued to make public appearances.

After Horn's death in Las Vegas in May 2020, at the age of 75, Fischbacher said: "From the moment we met, I knew Roy and I, together, would change the world.

"There could be no Siegfried without Roy, and no Roy without Siegfried."

He later told Germany's weekly Bild am Sonntag newspaper that his best friend would always stay by his side.