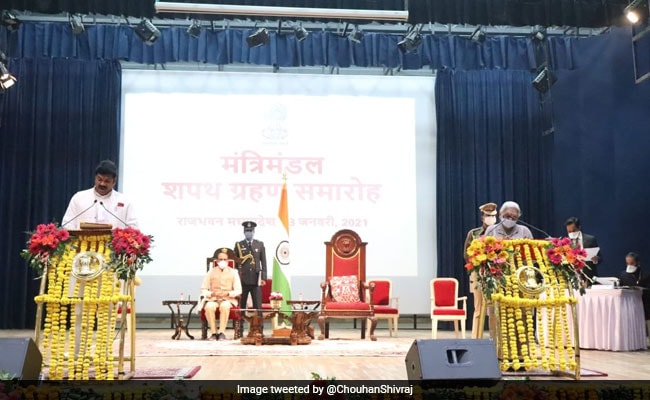 The Shivraj Singh Chouhan-led Madhya Pradesh cabinet was expanded on Sunday with the induction of two loyalists of BJP leader Jyotiraditya Scindia, whose exit from the Congress in March last year led to the fall of the 15-month-old Kamal Nath-led Congress dispensation in the state.

Chief Minister Shivraj Singh, Protem Speaker Rameshwar Sharma and several ministers of the state cabinet were present during the brief ceremony held at the Raj Bhawan.

This is the third expansion of the state cabinet ever since Mr Chouhan took over as the chief minister for the fourth term in March 2020 after the collapse of the Congress government.

Mr Silawat and Mr Rajput had been inducted into the cabinet in April last year during its first expansion. However, they had to step down in October as they were not members of the state legislature because the coronavirus pandemic delayed the bypolls.

There is a mandatory provision that a non-MLA, who got inducted in the cabinet, should get elected to the State Assembly within six months.

The first expansion was held on April 21 last year wherein five ministers, including Silawat and Rajput, were inducted.

Mr Silawat and Mr Rajput were among the Congress MLAs who had resigned and joined the BJP with Mr Scindia in March last year.

In the Assembly bypolls held on November 3, the BJP had won 19 of the 28 seats, while the opposition Congress had bagged nine.