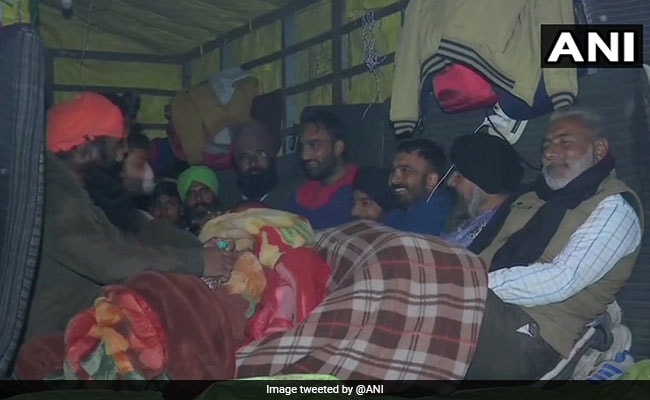 Farmers were seen huddled together under blankets inside their vehicles to keep warm.

The farmers, who have been camping on the borders of Delhi for over a month in protest against the new farm laws, continued their agitation amid a downpour leading to waterlogging at the protest sites. Farmers were seen huddled together under blankets inside their vehicles to keep warm. Tents were set up with waterproof tarpaulin sheets as protection from the rain.

"We are living on the streets in such harsh weather conditions away from our family. We're hopeful that the government will accept our demands tomorrow," a protesting farmer at the Gazipur (Delhi-UP) border told ANI.

Meanwhile, politician Yogendra Yadav, speaking on behalf of the farmers' unions, informed on Friday that the protesting farmers will intensify their agitation at Delhi borders if the centre declines their demands of a repeal of the three agriculture laws and giving legal status to the minimum support price guarantee in the next round of talks, scheduled on January 4.

After the sixth round of the farmer-centre talks on Wednesday, Union Agriculture Minister Narendra Singh Tomar had said that the two sides had arrived at an "agreement" on two of the four demands.

Here are the live updates on farmers' protests: