Protests and a state of emergency in the Central Asian nation’s capital following a disputed parliamentary election.

Kyrgyzstan’s parliament is set to meet and potentially vote in a new government to end a power vacuum in the strategically important Central Asian nation which has been gripped by unrest since the October 4 elections.

The election results, which handed victory to establishment parties, have now been annulled, something the opposition had been calling for.

Despite the annulment of the vote, tensions in the country continue as rival politicians and their supporters press claims to leadership posts and state institutions are in chaos.

The former Soviet republic of 6.5 million hosts a Russian military airbase and serves as a hub for trade with neighbouring China. It is also home to a large Canadian-owned mining operation.

Military checkpoints were put up overnight around capital Bishkek and armoured personnel carriers were spotted in the city after President Sooronbay Jeenbekov ordered troops to deploy and re-establish order amid flare-ups of violence.

On Friday, the embattled president also ordered a state of emergency in the capital in a bid to end the turmoil. 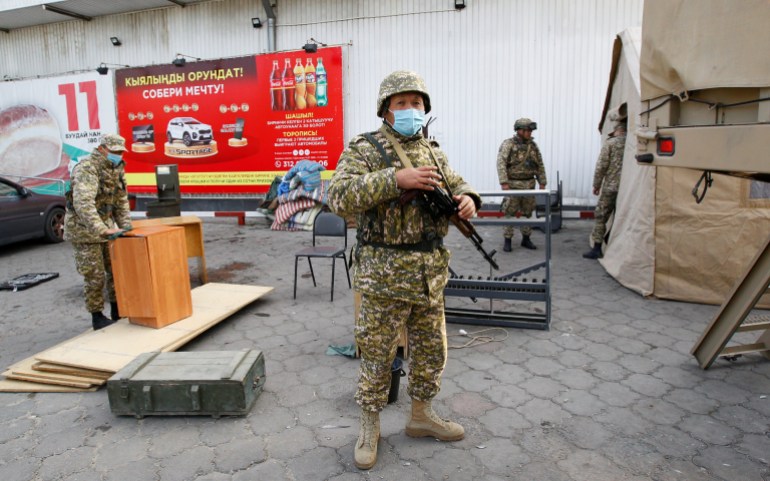 Military checkpoints were put up around capital Bishkek as protests escalated [Vladimir Pirogov/Reuters]More than 1,200 people have been injured and one person has been killed in street clashes since protests erupted on Monday.

The parliament planned to gather in the presidential residence on the outskirts of Bishkek after its offices were ransacked by protesters who seized key government buildings last week.

It was unclear which candidates the legislature would consider for the premiership, although deputy speaker Aida Kasymaliyeva urged MPs to reconsider the nomination of opposition politician Sadyr Zhaparov, saying that voting him in would only divide the country further.

Zhaparov’s supporters clashed with followers of a few other parties on Friday which nominated their own candidate, Omurbek Babanov. Several people were wounded, including a politician nominated to serve as Babanov’s deputy.

The opposition is divided between 11 parties which represent clan interests in a country that has seen two presidents toppled by popular revolts since 2005.

Russia, which is a key foreign power with interests in Kyrgyzstan, described the situation as chaos. While it has attempted to broker internecine disputes in the past, it was unclear if the Kremlin could help stabilise a fluid situation in the republic.

The crisis tests the Kremlin’s power to shape politics in its former Soviet sphere of influence, at a time when Armenia and Azerbaijan are clashing and Belarus is engulfed in protests.