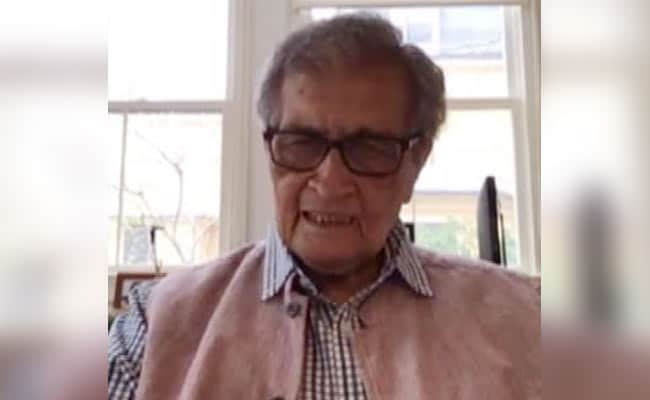 Praising Kerala for the way it has handled the coronavirus surge, Nobel-laureate and economist Amartya Sen said on Friday COVID-19 would be a transformatory movement in the State and it has dealt with the pandemic combating bureaucracy and red tape.

Mr Sen was speaking during a webinar on development titled ''Kerala Dialogue'', organised by the Kerala government to bring together thinkers, policy-makers, professionals, scientists and the public to a space where they could rethink and reimagine development for a world disrupted by the pandemic.

Mr Sen came down heavily on the "unplanned and unstructured lockdown" in India and said it caused distress and hardship.

"I think COVID would be a transformatory movement in Kerala. There is a danger of being deluged under the rather deceptive economic slogan that is so dominant in India today and there is widespread resistance to that. But it also suggests that combating bureaucracy, combating red tape, and doing things with exceeding speed, which indeed is what Kerala seems to have done in dealing with Covid," Mr Sen said.

Well-known philosopher and social critic, Noam Chomsky, who also participated in the talk, said the way Kerala responded to the Covid-19 pestilence was a surprise to the whole world.

"The differences in the way between Kerala and the rest of India, and the rest of most of the world, on how they reacted to the crisis was quite startling.Not many places have dealt with it the way Kerala has. This pandemic has brought out very sharply the extraordinary inequality that has been, of course always there, but greatly exaggerated through the neo-liberal period," Mr Chomsky said.

Asked if there will be a fundamental change in the world at the end of the pandemic, Chomsky claimed countries like the US are trying to continue the current situation and move to more dictatorships, restrictions and people-watching.

"But there are movements all over the world to counter this.Coordinating this can be a huge force. They can make changes and they are all trying to create a new world," Mr Chomsky said.

Mr Sen appreciated the public healthcare system and the high level of literacy in the State.

"The unplanned and unstructured lockdown in India caused distress and hardship. The government should have discussed the matter with civil society.

However, the government implemented the lockdown in an authoritarian manner.It was a disaster for the daily wage labourers," Mr Sen said.

Mr Sen also pointed out that the collapse of the public system, which has happened in Europe, has not happened in Kerala.

"Though Europe had a tradition of public sector intervention it is not there now but that kind of reliance on the public sector can still be seen in Kerala,"he added.

WHO Chief Scientist, Dr Soumya Swaminathan saidcountries, which responded to the early warning issued by the World Health Organization, were better prepared to face the pandemic.

That is why the first cases from Wuhan could be discovered.Following this, Kerala was able to locate, quarantine those who had contact with them and contain the outbreak.

Kerala has been able to contain the disease as fast as possible due to proper preventive measures," Mr Swaminathan said.

Mr Chomsky said Vietnam has confronted this pestilence and not a single Covid related death was reported there. He also pointed out that South Korea has also effectively controlled the pandemic without even a lockdown.

"Taiwan, Hong Kong and New Zealand are other countries that dealt with the disease.

In Europe, Germany was able to prevent the spread of the disease in a good way.What saved them was that Germany did not adopt a commercial hospital system like the US," he said.

Mr Chomsky said it was Doctors from "poor Cuba, who have been the victims of the US economic assault for more than six decades", who moved to Italy to help them out.

"This pandemic was able to show the extraordinary inequality of the world. In the United States, it was most pronounced....Blacks and their descendants from Spain and South America suffered the most in the United States," he claimed.